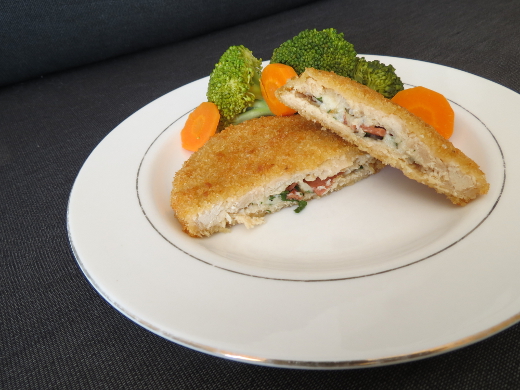 We capped off our new year weekend with a vegan picnic and a Family Favourites theme. I wanted to learn what foods make my friends feel nostalgic, their back stories, and the funny nicknames they might have. Most of all, I wanted to introduce them to Superchook.

Superchook fits all these criteria. It's something my mum made semi-regularly as I grew up, taking a little extra effort than most dinners, the kind of thing I'd ask for on my birthday. It was a chicken fillet stuffed with chopped bacon, cheese and green herby specks, then crumbed and fried. From the stuffing to the substance to the egg-dipped outer, it's light-years from vegan eating.

Funnily enough, my picnic adaptation was easier to prepare than the original. I bought a packet each of Fry's and Gardein crumbed schnitzels, unsure of which would work better (Fry's were easier to work with, but I liked the Gardein texture better). I gently, gently sliced a pocket longways through each schnitzel and spooned in a mixture of grated Vegusto Melty cheese, diced and fried Cheatin' Rashers, finely chopped parsley and ground pepper. Rather than frying and fretting over them holding together, I popped my Superchooks in the oven for 20 minutes and they were good as gold.

With it being a picnic and all, none were eaten in their native habitat - hot with cheese oozing at the dinner table, served with steamed veges on the side - but they vanished rapidly nonetheless. Even vegan, this chook's still super.
Posted by Cindy at 7:41 pm