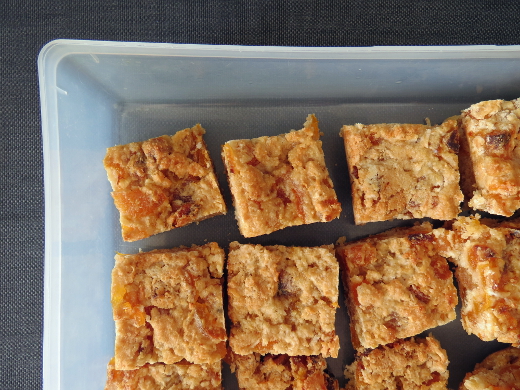 Cindy's Family Favourites picnic theme had me scratching my head - our family meals were from a straightforward meat 'n' veg range, and nothing amidst the chops and sausages of my memories jumped out at me for the occasion. Instead, I thought back to school lunchboxes and found myself strangely nostalgic for this relatively simple apricot slice. Mum dug up the recipe for me over Christmas - they're called Doffie Biscuits and they're basically sugar, flour and dried fruit.
Veganising them only required me substitutes for 2 eggs and a couple of tablespoons of butter - Nuttelex did the trick for the butter, while a combination of Orgran No Egg and apple sauce provided enough moisture and binding power to replace the eggs. The results aren't going to change your life but they're good - heavy on the apricot and nice and chewy. And if you're me they're going to transport you straight back to your awkward teenage years.

Doffie biscuits
(based on a recipe from a cookbook compiled for the School of the Air some time back in the 1980s)
2 cups wholemeal self-raising flour
1.5 cups caster sugar
600g dried apricots, sliced up (the original recipe calls for 1.5kg of dried fruit, but whoever compiled the cookbook suggested that 500g was enough)
4 heaped tablespoons shredded coconut
2 tablespoons melted Nuttelex
2 teaspoons Orgran No-Egg, mixed with 4 tablespoons water
1/2 cup of apple puree
Pre-heat the oven to 180°C.
Mix the flour, sugar, apricots and coconut in a big bowl.
Stir in the Nuttelex, egg replacer and apple puree.
Spread the mix evenly in a large flat tray and bake for 30-40 minutes, until the slice is cooked through. It will seem a bit soft when it's hot, but will firm up as it cools so you can slice it up. 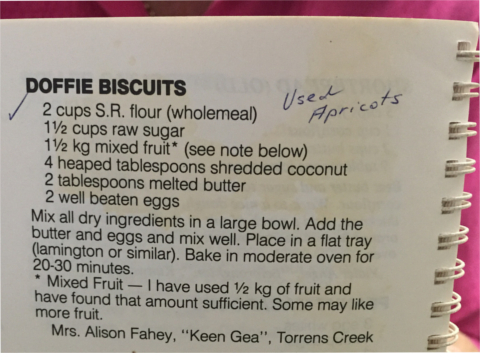