Cindy and I moved to Melbourne mid-2006 and one of the first things we did was grab ourselves a copy of The Age's Cheap Eats Guide. The rise of Zomato/Urbanspoon has diminished the influence of these books, but when we arrived the Cheap Eats was our guide. This year we're pulling the old book off the shelf to see what's changed in the past decade.

I've gone through each of the 474 listings in the 2006 guide, noting down the type of venue, the region it's in, whether or not we've blogged it and whether it's still open. Shockingly, there wasn't a single Mexican restaurant in the 2006 guide - an almost unbelievable absence given the Mexican explosion that hit Melbourne a few years later.

Of the 474 places listed in the 2006 Cheap Eats, 282 (59.6%) are still open. The survival rate varied substantially by venue type - bakeries were pretty secure while burger joints, seafood purveyors and vegetarian restaurants failed in droves. 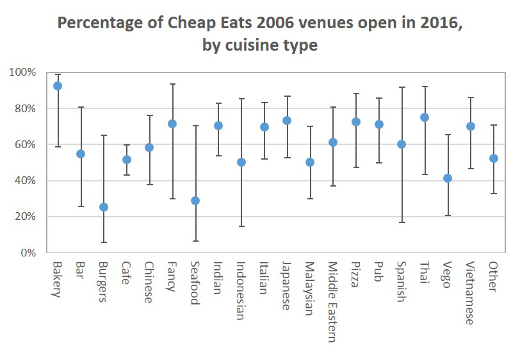 There was surprisingly little variation by region. I expected that the gentrification of the inner-north would have swept away the majority of the 2006 entries, but it was the inner South-East (South Melbourne, Middle Park, Albert Park, South Yarra, Prahran and Windsor) that had the most closures. 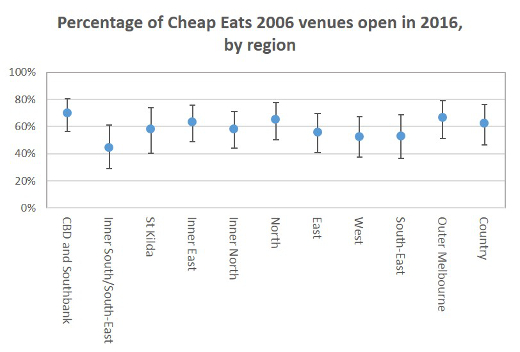 To properly test our influence though, you need to control for the kinds of places and areas that we tend to blog. So I popped all of these data into Stata and got cracking. In a logistic regression analysis, controlling for type and region of venue, places we blogged were 4.7 times (2.2-9.9) more likely to be open than those we didn't*. Surely all the evidence you need of the remarkable influence that where's the beef? has on the world.


Throughout 2016 we're planning to revisit some of these old listings, returning to favourite eateries and finally checking out some places we've shamefully never gotten around to. We reckon these stayers warrant our blogging attention as much as buzz-hungry new venues.


* The very fact that a place stayed open increased the likelihood that we eventually got around to blogging it, meaning that the causal relationship here goes in both directions. As a robustness check, we just looked at whether or not being blogged on wtb by the end of 2007 was associated with being open in 2016 - the significant relationship remained, adding weight to the argument that where's the beef? attention is a strong predictor of business survival.
Posted by Michael at 1:31 pm