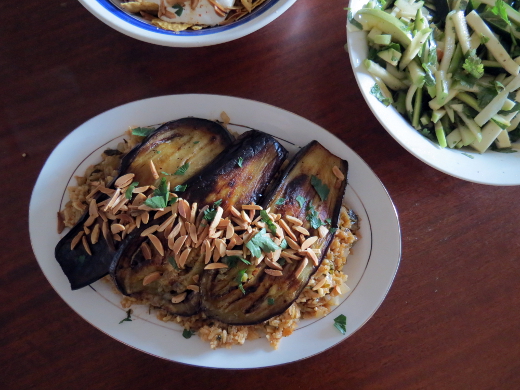 I received the Moroccan Soup Bar cookbook for my birthday! The thick volume collates many recipes from the eponymous restaurant, which we've visited many times during our near-decade in Melbourne. (In 2016 we're likely to become even more frequent visitors to the newly opened sister cafe Moroccan Deli-cacy.)

A visit to the Moroccan Soup Bar has always been much more than a plate of food, with the wild-haired and lion-hearted restaurant founder Hana Assafiri roaming the room, minimal table reservations, no alcohol, and a spoken menu of vegetarian dishes rich in herbs and spices. Likewise, the book is much more than a catalogue of recipes; Assafiri devotes many pages to her philosophy of generosity, actively supporting women within her business and creating a convivial, diverse environment that doesn't shy away from debate. (I was excited to see her featured in Ai Weiwei's Letgo Room of Aussie activists at NGV.) 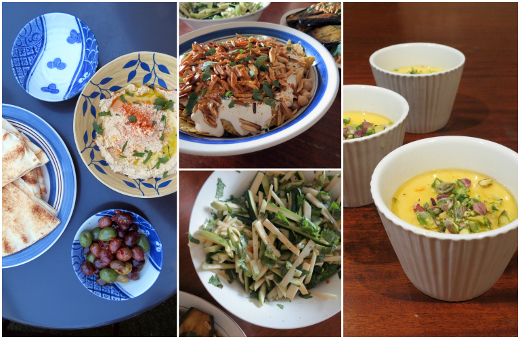 I devoured Assafiri's words on Boxing Day, and planned a feast of her foods to welcome Michael and his brother Matt back to Melbourne a couple of days later. We started with marinated olives, hummus swirled with olive oil and sprinkled with parsley and paprika, and flatbread. Of course, the famous chickpea bake was mandatory (I made mine using a corn chip cheat I figured out a couple of years ago). Michael helped julienne zucchini and apple for a tangy salad (though we forgot to add the pomegranate seeds I'd patiently collected earlier that afternoon!). I teamed these dishes with makloubeh, a vegan-friendly eggplant and rice dish that I'll share the recipe for below. Finally, after a big break, I served muhallabiya in ramekins - these are dairy-based puddings flavoured with orange and lemon, drizzled with an orange blossom syrup and scattered with pistachios.

But back to the makloubeh (pictured up top). This dish consistently pops up in the Moroccan Soup Bar banquet as a platter of red rice, topped with an eggplant slice and slivered almonds. Herbs, spices, tomato paste and pomegranate syrup go straight in with the rice as it cooks and the eggplant slices are browned separately in a frypan and stored in a low oven, rendering them smoky and close to collapse. There's enough substance and variety to enjoy makloubeh as a meal on its own, and I reckon we'll be doing that on weeknights to come. As it was, we packed leftovers into lunchboxes and wolfed them down at the Boxing Day Test the next day.


Slice the eggplant into 1cm-thick 'steaks'. Sprinkle salt on both sides of the slices and allow them to drain in a colander.

Peel and finely dice the onion and garlic. Coarsely chop the parsley and coriander.

Place the olive oil in a large saucepan over medium-high heat. Add the onion, garlic, parsley (reserving a little bit for garnish), coriander, cumin and chilli powder; saute until the onion is soft. Stir in the tomato paste. Add the water and bring it to the boil. Rinse the rice and, when the water in the saucepan is boiling, add that rice to the pot. Bring it all back to the boil, then lower the heat to medium and allow the rice to cook for 20 minutes.

While the rice is cooking, set oil in a frypan over high heat and brown the eggplant slices on each side, sprinkling over a little pepper as they fry. Place the eggplant slices in a baking tray and, when they're all done, place them in an oven on low heat. Place the almonds in a small bake-proof tray and toast them in the oven, too.

Once the rice has hit 20 minutes, stir through the pomegranate syrup. Cover the saucepan and simmer the rice for a further 15 minutes.

Make sure you get those almonds out of the oven before they burn! When everything is ready, spoon the rice onto a platter. Layer the eggplant slices over the rice, then sprinkle them with the almonds and reserved parsley. Serve as a main meal or a component of a feast!
Posted by Cindy at 7:51 am