We were tipped off by a couple of different friends about the recent opening of Tahina, a vego Israeli place that's recently popped up on High Street in Northcote. We were on a weekend mission to Preston to get some La Panella pies, and Tahina was the perfect pit-stop along the way. 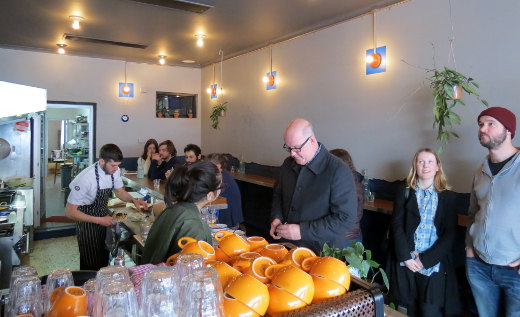 It's a cosy little place with counter seating for maybe 16 people, suggesting that they're hoping for a big takeaway trade. The menu is split between savoury Middle Eastern delights and an array of smoothies. Food-wise there's two kinds of falafel, three kinds of shakshuka plus a bunch of salads and pita pockets. It's all veg and super vegan-friendly - even the shakshuka can be veganised, with eggplant swapped in for the eggs. 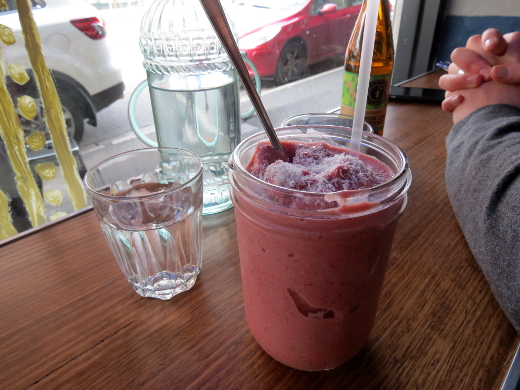 This was almost a meal in itself! She thoroughly enjoyed this creamy-berry-nutty concoction.

We weighed up the shakshuka, but decided instead to go all vegan. The mixed falafel platter came with both green (parsley, coriander and mint) and red (chilli and red peppers) falafels, along with Israeli salad, pickled cabbage and tahini sauce ($12). They threw in some pita bread ($2 extra). 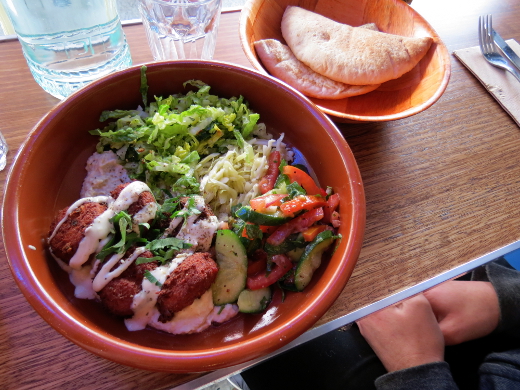 The falafels were fantastic, a big step up from the dry offerings at Bowery to Williamsburg. The mixed platter was a bit of a random sample, with five red falafels and just one green - not to worry though, the red falafels were top notch, with a decent chilli kick. The accompaniments were great as well, and the bread was incredible - this is a damn fine $14 meal.

Even better was the other dish we ordered: the cauliflower papiot ($7), a whole roasted baby cauliflower with garlic, rosemary, thyme and lemon, with a tahini-based sauce on top and a big slathering of hummus underneath. 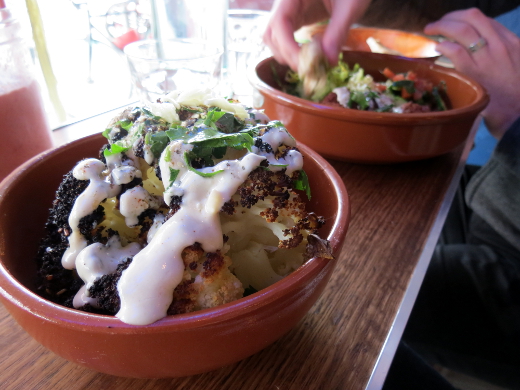 The cauliflower was charred to within an inch of its life - tender and smoky, with plenty of tang from the tahini and lemon. This seems like it'd be pretty easy to try at home - we've been on a bit of a roll with cauliflower lately, but this just about takes the cake.

There are a couple of desserts to choose from - Billy van Creamy tahini ice cream ($5) or affogato with tahini ice cream ($7) - we didn't have the space to try them out on this trip, but we'll surely go back and try them out. Tahina is a brilliant addition to Melbourne's food scene - fantastic, affordable vego food, with tons of vegan options and a friendly, casual vibe. It's like Northcote's very own Mankoushe - we can't wait to get back and try more of the menu!

Accessibility: There's a small lip on the entryway. The interior is a bit crowded and all the seating is at high benches. You order and pay at the counter.
Posted by Michael at 8:18 am