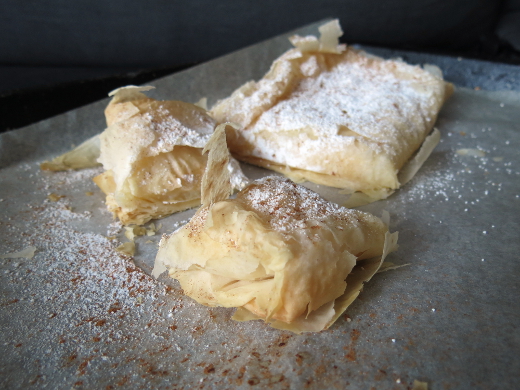 I was smitten by this recipe the day that Greek Vegetarian Lisa posted it, but it's taken almost two years for me to try my hand at it. I gave it a go on a Sunday afternoon home alone, but not before I set some seitan simmering and cued up Netflix to replay the second season of United States of Tara.

The centre of the slice is a custard thrice-thickened with cornflour, semolina and eggs. I also made sure to add my fanciest vanilla. The custard is wrapped simply in a few layers of filo pastry, dabbed with butter. (Make sure to watch the video embedded in Lisa's post for some expert elastic bougatsa wrapping!) Since we weren't able to eat it all in a day I stored most of the custard and pastry separately in the fridge, assembling and baking just one pastry every few days when we were ready for it.

I'm not usually one for daintily dusting sweets on serving, but I think the sugar and cinnamon really liven up this dessert. We also accompanied ours with sliced kiwi fruit on the side - it turns out that kiwi and custard make a great team.


Bougatsa me Krema
(a recipe found on Greek Vegetarian,
where it's credited to George Columbaris' Greek Cookery)


In a medium-large saucepan, stir together the cornflour, semolina and sugar. Whisk in the eggs and then the milk. Set the mixture over medium heat and cook it, stirring regularly, until the custard thickens, about 5-10 minutes. The semolina may cause it to thicken unevenly - just keep stirring and don't worry about it too much. Take the custard off the heat and whisk in the vanilla, trying to smooth out those semolina lumps as best you can too. Set the custard aside to cool a bit.

Preheat an oven to 180°C. Line a large baking tray with paper.

On the baking tray or a bench, layer five of the filo pastry sheets, brushing a little melted butter between each layer. Spoon a quarter of the cooled custard into the centre of the pastry rectangle, forming a rectangle of about 10cm x 15cm. Wrap the filo pastry up into a rectangular package (the video on Greek Vegetarian's page is a good guide), using a bit more melted butter to 'glue' the pastry up. Repeat with the remaining pastry, butter and custard to make four custard pastries and arrange them on the baking tray.

Bake the pastries for 20 minutes, until lightly golden, turning them upside down halfway through. Allow the pastries to rest for at least 10 minutes before dusting them with icing sugar and cinnamon, then slicing and serving.
Posted by Cindy at 4:19 pm