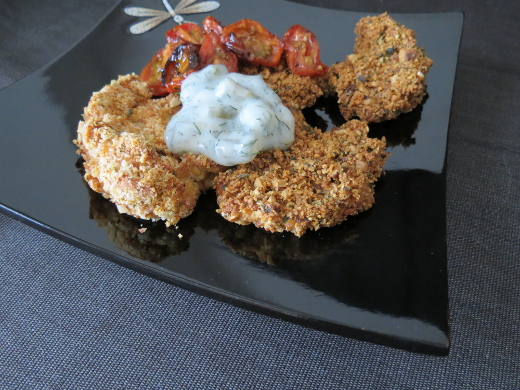 Our vege deliveries have continued to send enormous cauliflower heads our way. We're not sick of them yet, calling on old recipes and trialling new ones with equal success. This is another new one, found on Vegan Richa. Richa coats flat fans of cauliflower in a besan batter, rolls them in a spiced almond meal crust and then bakes them until they're golden brown. Set against black plates with a sash of vegan cheese sauce, they look very fancy.

My rendition above is a little less elegant, but a firm success. The besan batter was smooth and easy to work with. I rapidly ran out of crumbing and made a second batch using roasted hazelnuts instead of almonds - they were a shade darker and deeper in flavour, and I've adjusted the quantities below to fit. If you're not fussy about presentation, there proved an even easier way to prepare these - I dropped the last cup of cauliflower florets into a baking dish, drizzled the remaining batter over and scattered them with crumbs, giving the florets a quick toss half-way through baking. They were just as tender and tasty and almost as crisp; we ended up eating them on sandwiches with mustard.

The larger, more presentable cauliflower slices were served with tartare sauce and roasted cherry tomatoes. I think they're at their best with a tart or pickley condiment.

Nutty crumbed cauliflower
(based on a recipe by Vegan Richa)

Slice the cauliflower into 1cm-thick pieces, as broad as they can be. Keep and use any florets that break off too.

Prepare the batter in a large shallow bowl. Stir together the dry ingredients (besan through to pepper) and then whisk in the almond milk until smooth.

In a bowl, stir together the crumbing ingredients (except for the spray oil) and then spread them out on a plate.

Take a cauliflower slice and submerge it in the batter, ensuring that it's well covered. Allow the excess batter to drip off, and then place it in the crumbing, using your fingers to press crumbs evenly over the cauliflower's surface. Place the crumbed cauliflower piece on a baking tray and repeat with the remaining cauliflower. Spray all of the pieces with oil and bake them for 20-30 minutes, until they're tender inside and browned on the outside. Don't bother trying to turn them over mid-bake.
Posted by Cindy at 7:34 pm