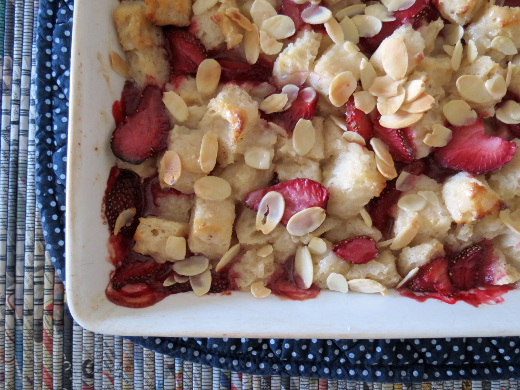 Every time I've opened up Isa Does It (and it's often), I've gazed longingly at the strawberries and cream bread pudding. When I noticed two weeks ago that strawberries were cheap and abundant, I started thinking often of the pudding even when I wasn't flicking through cookbooks. I pretty much planned our home-cooked lunch with Carol around making it for dessert. You might notice, for example, that the main meal was pretty low on carbohydrates, to save room for this bready finale. 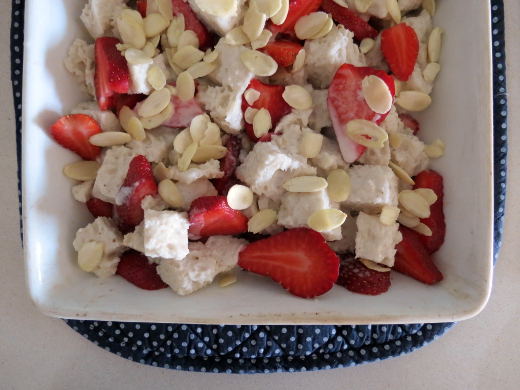 It goes like this: cube up sturdy day-old bread. Whisk together a custard of almond milk, coconut milk, sugar and cornflour (I may have added some dark rum). Soak the bread in the custard and toss it in a pan with lots of strawberries and a sprinkling of flaked almonds (doesn't it all look eerily white?). Bake the pudding until the almonds and bread are golden and the custard has set. Drizzle over some glaze if you like (more sugar! more rum!), and scoop it into bowls with vanilla icecream.


I'm glad I got to scratch that itch, while strawberries are everywhere and it's still cold enough for pudding. If you move fast, you might capture that crucial window too.

Place the bread cubes in a large bowl. Place the cornflour in a smaller bowl and gradually whisk in the almond milk. Whisk in the sugar until it's mostly dissolved. Stir in the coconut milk, lemon juice, dark rum and cinnamon. Pour this mixture over the bread and allow it to steep for around 10 minutes.

Spread the soaked bread cubes and strawberries out in the baking dish and sprinkle them with flaked almonds. Bake the pudding for 30-40 minutes, until the bread is lightly browned. Allow it to cool for 10-20 minutes.

Whisk all of the glaze ingredients together until smooth in a small bowl. Once the pudding has cooled a little, drizzle over the glaze. Serve the pudding with a scoop of icecream.
Posted by Cindy at 5:09 pm

Labels: Dessert, Isa Does It, Vegan or vegan-friendly