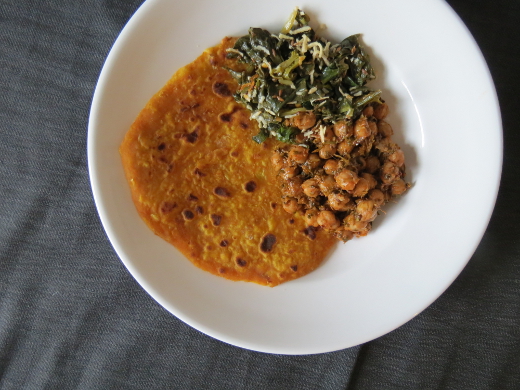 This little half-recipe caught my eye while I was reading the blog Challenge Accepted! earlier this year. It's a pumpkin spring onion pancake with just three ingredients. Substituting sauteed leek for the spring onion, we rolled ours out flatter, fried them in a little less oil and used them as flatbread to eat with spiced chickpeas and coconut spinach.


Mashed pumpkin is a beautifully soft and sweet binder for this kind of bread, which can otherwise be a little bit tough (... when I make it, anyway). The bread was a soothing flavour and grounding texture alongside these tangy curries. 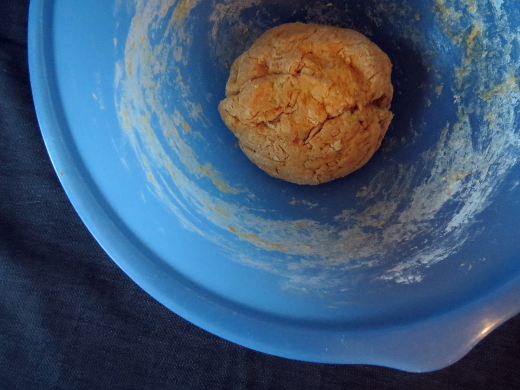 
Preheat an oven to 180°C. Line a baking tray with paper.

Remove the skin from some pumpkin and slice it into large wedges. Roast the wedges until they're very tender, 40-50 minutes. (If you're using a leek, use this time to slice it into rounds and saute it in a frypan until soft.) When they are cool enough to handle, transfer the pumpkin to a large bowl and mash it thoroughly. (If you're using a leek, stir it into the mashed pumpkin.) Sprinkle over a little salt, and use a wooden spoon to fold in plain flour a 1/4 cup at a time, until you've formed a tacky dough.

Roll out some baking paper onto a bench, and liberally dust it with flour. Pinch off a 1/4 cup round of dough and plop it on the paper, dusting the top with a little more flour. Roll out the dough to form a rough circle about 3mm thick. Heat up a frypan with just a touch of oil, and fry the flatbread for 30-60 seconds per side, until it's dry on the surface and brown spots appear. Repeat the rolling and frying process with the remaining dough.
Posted by Cindy at 8:19 am