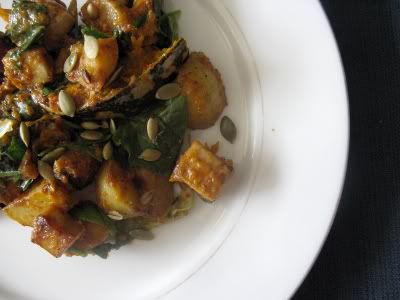 One of the many gifts I showered Cindy with on her recent birthday was Heidi Swanson’s newish cookbook Super Natural Every Day. We've been fans of Heidi's blog 101 Cookbooks for a while, and her photos and recipes look wonderful in printed form. The book has a similar vibe to Ottolenghi’s Plenty (which even the occasional reader will know we’re completely in love with), although the recipes tend to have fewer ingredients and steps – consider it a weeknight Ottolenghi perhaps.

I decided to have first shot at cooking from it for a potluck we were attending on the weekend, settling on the gorgeous-looking miso-curry pumpkin, in part because of the massive pumpkin in our vegie box delivery and in part because it was vegan and gluten-free by default. Score.

The recipe is pretty simple – cut up your vegies, mix up a sauce and bake. I was particularly happy that it just specified ‘Thai red curry paste’ rather than demanding that we make our own, especially since Maesri offers a vegan friendly curry paste in a tin that we’ve grown quite fond of. We made a few tweaks, largely to use up vegie box ingredients – doubling the size and replacing the kale with a pile of lettuce leaves and the coriander with basil and parsley.

I was worried about the pumpkin skin being too chewy so I ended up overcooking the vegetables a bit – the pumpkin in particular went a bit soft and lost its shape. Luckily the tofu was nice and firm, providing some textural variation. More importantly, the whole thing tasted fantastic – the combination of white miso and red curry paste is divine, and the pumpkin and greens just soaked up the flavours. This was a smash hit at the potluck and may yet be remade at home to deal with the half-pumpkin still sitting in our fridge.

Preheat the oven to 200 degrees.

Cut the pumpkin in half, scoop all the seeds out and chop into 1cm thick half moons (half of our pumpkin was roughly 700g, adjust based on pumpkin size).

Whisk together the miso, olive oil and curry paste. Take roughly half of this mixture and combine it with the tofu, pumpkin and potatoes in a large bowl. Get your hands in there and make sure that everything gets well covered in the sauce.

Add the lemon juice to the remaining sauce.

Lay the sauced-up veggies out on baking trays and roast. We ended up roasting them for about 45 minutes – this was probably a bit too long. Stick the recipe's recommendation of 30 minutes, but make sure you check up on things regularly and toss to make sure everything gets its share of roasting.

Once the vegetables are roasted, pop them into a large bowl and combine them with the remaining sauce, the lettuce leaves and herbs and the pepitas. Stir everything thoroughly (but gently if you want your pumpkin slices to retain their shape!) and serve. We had ours at room temperature and it was still wonderful.
Posted by Michael at 12:59 pm