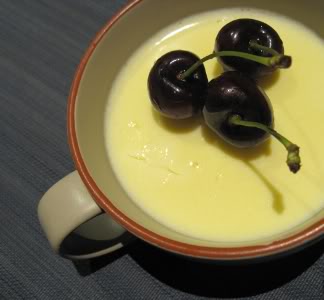 We had some friends over for po' boys on Saturday night. It was all planned late and I didn't have time to make and freeze icecream, but this lemon posset recipe from Stonesoup looked like a nice alternative. It is maddeningly simple - dissolve sugar in cream, stir in lemon juice and chill in cups. I could only squeeze in five of the six instructed hours of refrigeration, but didn't imagine that would change the texture too much. As I shared the posset cups around, I offered mango, orange and cherries for dunking.
The top of the dessert had the same thick custardy texture as Jules' seemed to have in her picture. But as I dug down, I noticed it was much more watery at the bottom. When I mixed it all up it had the same texture as the heavy cream I used - lovely for submerging fruit in, though I kinda wished it was custardy all the way through. If I made this again, I think I'd experiment with a little cornflour or an egg yolk for some setting power. Either way, it's an elegant time-saving alternative to icecream.

Lemon posset
(adapted slightly from a recipe at Stonesoup)


In a small-medium saucepan over medium heat, stir together the cream and sugar. Keep cooking them until the cream just starts to bubble and the sugar is completely dissolved. Remove the mixture from the heat and stir in the lemon juice. Divide the mixture between five small bowls or cups. Refrigerate for 6 hours, then serve with fresh fruit.
Posted by Cindy at 10:17 am