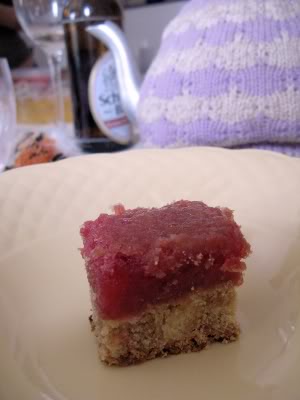 Last weekend pub club turned potluck again. Michael recreated Ottolenghi's lovely quinoa salad with Persian dried lime, while I tried something new. The Sugar Junkie had posted a recipe for raspberry lemonade slice just a few days earlier and it hadn't left my mind since!
With a coeliac in the crowd I knew there'd be alterations to make. In fact I ended up replacing the biscuit base entirely with another recipe I've used before. This landed me in troublesome portioning territory. It took two packets of biscuits to spread a base in a 22cm-square baking tray, yet I could have filled the tray with my raspberry topping twice over. I tried baking the excess raspberry lemonade mixture in ramekins, and they made passable puddings, but in the recipe below I've halved the topping quantities so that it should fit the slice more neatly.
I was not attentive enough with oven temperatures and times either, so take the ones below as a guide only. Michael had been busily baking sweet potato and I just shoved this in without a glance at the dials. (Silly, silly Cindy.) My slice emerged blackened at the edges with unsightly brown craters on top, an unappetising gloopy texture and firm grip on the baking paper. I did not have time to refrigerate it; it was still warm as we arrived at the potluck. I was embarrassed to take it to the table, not least because there was already a perfect gingerbread house with a Curly Wurly fence sitting smugly on said table.
Miraculously, this slice received more than just pity compliments. Some people expressly praised the texture. I'd timidly sliced up just half of it, yet people were coming back for seconds and carving it up further. One of my closer friends admitted that he wasn't expecting much when he first saw it, but he was ultimately very impressed (and helped himself to a substantial extra portion to prove it). I guess it takes more than my petty neglect to ruin raspberry lemonade.
Still, if you're going to position it right next to a gingerbread house, a little more care and perhaps a sprinkle of icing sugar wouldn't hurt.

Raspberry lemonade slice
(adapted from a recipe on The Sugar Junkie,
taking further inspiration from the base of this slice)


Preheat an oven to 180°C and line a slice tray (mine was 22cm square) with baking paper.
Make the crust by crushing the biscuits in a bowl. Stir in the margarine, vanilla and rice milk until well combined. Spoon the mixture into the baking tray, smoothing it out with the back of a spoon to evenly cover the base of the tray. Bake the base until just golden, about 15 minutes.
While the base is baking, prepare the topping. In a large bowl, stir together the sugar, flour, lemon zest and salt. Puree the raspberries in a blender or food processor, then press them through a sieve and into the flour mixture. (Discard the seeds and muck left in the sieve.) Stir the raspberry puree through the dry ingredients until they're well mixed. In a separate small bowl, lightly whisk the egg and egg whites together. Add the eggs to the raspberry mixture, whisking thoroughly to combine. The mixture will be very liquid, but persevere. When the base is ready, pour in the raspberry mixture and return it to the oven to bake until set, up to 50 minutes.
Chill the slice thoroughly in the fridge to set it before slicing.
Posted by Cindy at 10:52 pm