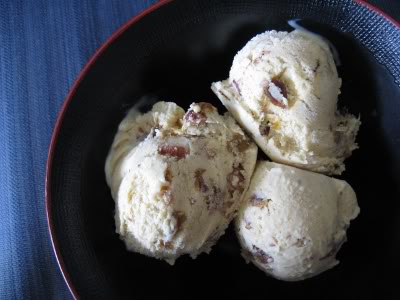 I was on quite a dessert kick last weekend, turning out two batches of cupcakes and then this icecream. I was looking for an actual chocolate-less dessert as I browsed through The Perfect Scoop, and I picked this one because Michael's rather partial to rum and raisin flavoured sweets. He pitched in by bringing home a small bottle of Bundy Rum, a liquor best characterised by Rich Hall, and trashily appropriate since we ended up sharing the icecream with a bunch of Queenslanders.
Michael didn't bring home as much cream as the recipe required, yet I didn't attempt any substitutes for it, so this was a pretty intense dessert (the 3-scoop serving pictured above would satisfy 2-3 people!). In particular it was very boozy - if that's not your thing I'd suggest soaking the dates as directed (or replacing some of the rum with water, perhaps) and omitting the extra rum that goes into the custard. On this occasion it was my thing; I loved the way the dark rum stretched into the rich caramel of the dates and the yolk-heavy custard.

Date, rum & pecan icecream
(adapted slightly from a recipe in The Perfect Scoop by David Lebovitz)


Chop the dates into chunks and place them in a small saucepan. Pour over 1/4 cup of dark rum. Bring to the boil, then take the saucepan off the heat and set the dates aside at room temperature for at least 4 hours.
Roughly chop the pecans and gently toast them (I did this in the oven).
In a large bowl (ideally one with a lid!), pour in the cream and set a sieve over the top.
Place the egg yolks in a small-medium bowl, whisking them to smoothness.
In a medium saucepan over medium heat, mix together the milk, sugar and salt. Stir them together until everything's warm and the sugar is dissolved. Gradually pour the warmed milk into the egg yolks, whisking as you go. When it's all well mixed, transfer it back into the saucepan on medium heat. Stir the mixture constantly, scraping the bottom and sides of the saucepan to avoid burning and sticking, until the custard thickens.
Pour the custard through the sieve onto the cream. Whisk in the remaining 2 tablespoons of rum and the vanilla. Refrigerate the mixture for several hours, until thoroughly chilled.
Churn the icecream mixture in an icecream machine, according to the manufacturer's instructions. In the last few minutes of churning, add the dates and pecans to mix the through. Freeze the icecream for several hours, until firm and scoopable.
Posted by Cindy at 9:21 am