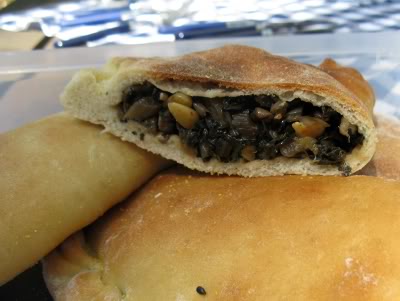 We spent some of last weekend with Michael's mum and her husband, Melbourne being one stop on their current driving tour through New South Wales and Victoria. They had booked a pleasant hotel overlooking Princes Park, so on Saturday we ate breakfast with them at Green Refectory and gave them a walking tour of Sydney Road.
On Sunday we headed out to the Dandenongs with a simple plan - they provide the transport, we provide the food, everybody strolls and has a nice afternoon. I took great delight in planning the menu and with Michael's help it wasn't too hard to pull together. We started with crackers and dips - muhammara, sun-dried tomato hummus and beetroot pesto. Then I sprung calzoni on them - that simple pizza dough wrapped around silverbeet, mushrooms, garlic, pine nuts and preserved lemon. (Thanks to Emily for the inspiration!) 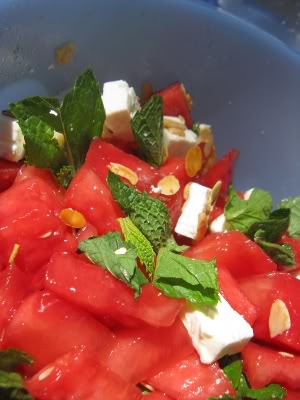 For a bit of freshness and something to segue into dessert, I made a watermelon salad. It was a post by Amanda last week that gave me the idea but rather than following her recipe precisely I tried to emulate the watermelon salad I ate a year ago at Hellenic Republic. In that time I've become increasingly irritated by George Columbaris' ubiquitous media presence, but I have to admit: the Dodoni feta he spruiks is the best I've tasted from a supermarket. The salad pleased me enormously, though I found that the watermelon cubes leached a lot of liquid in transit. Between that and the fresh mint leaves it was clear that this salad is best eaten as soon as it's prepared and I happily prioritised it that hot day, going back for thirds and finishing the leftovers for dinner.
And for dessert proper? Near-pure chocolate, of course.

Finely chop some silverbeet (stems and leaves), mushrooms and a little preserved lemon. Gently toast some pine nuts in a fry pan until golden. Remove them from the pan, the use the pan to heat a little olive oil. Add some minced garlic and the mushrooms, cooking gently for a few minutes. Add the silverbeet and cook until it's beginning to wilt; perhaps another 5 minutes. Turn off the heat and stir through the preserved lemon and pine nuts. Set the filling aside to cool.
Prepare a pizza dough and when it's ready to roll, preheat the oven to 180°C. Sprinkle a baking tray with a little cornmeal. Sprinkle a clean bench and a rolling pin with flour and pinch off a small ball of dough - say 1/4 to 1/3 cup. Roll the dough into a thin circle and spoon some of the silverbeet filling onto half of it, leaving a 1.5 cm border. Fold the dough over and pinch together the edges to seal your half-moon calzone; place it on the baking tray. Repeat with the remaining dough and filling, then bake you calzoni until the dough is cooked and a little golden, about 15 minutes. Serve hot or at room temperature.

Slice the flesh of a watermelon into large cubes, removing as many seeds as you can stand to. Place the watermelon in a large bowl and drizzle it with pomegranate molasses and a tiny bit of rosewater. Dice some feta, rip up some mint leaves and toast some flaked almonds. Toss these ingredients through the watermelon only when you're ready to serve the salad.
Posted by Cindy at 8:33 am