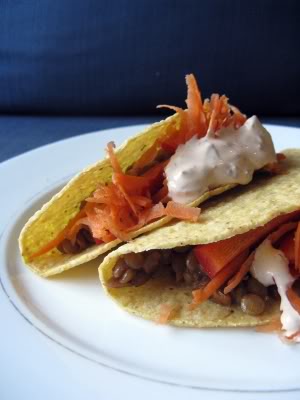 Cindy had tucked this recipe away for speedy school-night shenanigans, and I was happy to take charge of throwing it together. Lindyloo has provided us with many delicious recipes, so I was a bit surprised to see that this was basically a kit-taco assembled with lentils taking the place of mince. Still, the use of slightly terrifying pre-mixed taco spices added speed and simplicity to the whole deal, along with a distinct nostalgic flavour - back in the day many a share-house meal was based on the powdery delights of the taco seasoning sachet.

The chipotle sour-cream sauce effortlessly trumped the watery salsa included in the taco pack, demonstrating the limits of pre-packaged condiments, and a smattering of salad later we had ourselves some fine tacos. I tend to favour soft shell Mexican goodness, primarily because I lack the basic coordination to eat crunchy ones - but I had a smile on my sauce-stained face after this meal. Outstanding.

Heat the oil in a frypan and fry the onion, garlic and salt until soft.
Add the dry lentils and the seasoning and stir through, cooking for about a minute.
Pour in the stock and bring everything to the boil. Reduce the heat, cover and simmer for 20-30 minutes, until the lentils have softened. Uncover and simmer for a few more minutes to thicken up the mixture.
While the sauce is thickening, give the tacos 2-3 minutes in the oven, at about 180 degrees.
Mix together the sour cream and the chipotles.
Serve it up and enjoy!
Posted by Michael at 7:24 pm