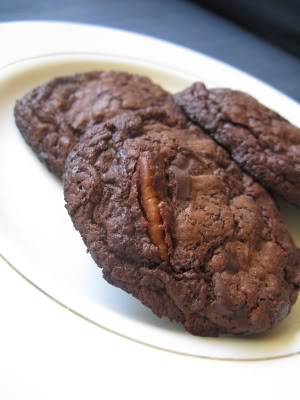 "Make something with chocolate... and gluten-free!" my cheeky coeliac officemate Andy suggested. Though this birthday baking wasn't for her, it was for her housemate, and she wanted in on the action. Luckily for Andy (and conveniently for me), Clotilde posted the perfect candidate cookie recipe just hours after our conversation. It was neither gluten-free nor vegan, but it was a cinch to adapt it and make it so.
It was Orgran to the rescue on both counts - their gluten-free flour mix and egg replacer made easy and direct substitutes for the offending ingredients. (A Nuttelex-for-butter sub was likewise a no-brainer.) And, of course, these imposters were never going to be detected - this recipe contains more than four times the weight of chocolate as it does my substitutes. So while you don't have to fuss over the flour, eggs or butter, it is worth buying chocolate you really like.
As a consequence, these are intense and melty and not as bulky as your average cookie. Yet they also have a little more softness and chew than I was anticipating - a win all round! Clotilde has this quantity of dough making 16 enormous cookies but I split it into a couple of dozen smaller serves - enough for a box for the birthday gal, a box for Andy, and a few more for a weekend picnic.

Pecan mudslide cookies
(adapted from a recipe at Chocolate & Zucchini)

Gently melt 250g of the chocolate and set it aside to cool slightly.
Line a baking tray with paper and preheat the oven to 190°C.
In a large bowl, beat together the Nuttlex and sugar until well combined. Gradually beat in the 'eggs' until the mixture is completely smooth. Sift in the flour, baking powder and salt and mix them until just combined. Add the melted chocolate and stir again only until the indgredients are just combined. Fold in the pecans and remaining chocolate.
Now the mixture's going to be pretty sloppy. Clotilde does this thing where she pours it onto a tray, refrigerates it, slices it into single portions and shapes them with her hands. I just plonked spoonfuls of the sloppy batter onto the tray and they turned out OK. (I refrigerated the remaining bowl of mixture for a while and it was tough to spoon and shape - probably don't do that.) Anyway, get your mixture into biscuity shapes on the tray, allowing some space for spreading.

Bake the cookies for 10-15 minutes, until they've just set on the surface. Allow them to rest for at least 5 minutes on the tray before transferring them to a rack to cool completely.
Posted by Cindy at 8:31 pm