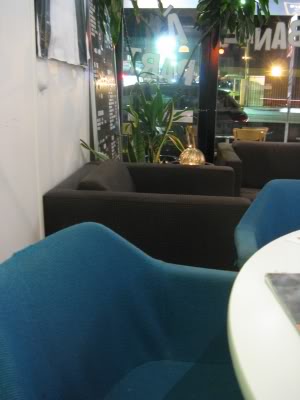 Cindy and I have had some good meals at Pizza Meine Leibe in Northcote, but the place has a few problems: it's too far away for a lazy night out and you probably need to book to make sure you'll get a table. Problem solved! Bande a Part in North Carlton is a Meine Leibe's closer, emptier sister. We turned up with Mike and Jo on a Wednesday evening and had our pick of tables in the spacious and trendy interior.

The friendly staff quickly had us sipping our first beers and perusing the long and varied menu. After a brief power struggle, we agreed to order 4 vego pizzas to share, along with a couple of salads to give us the illusion of nutrition.

The first salad (Ms Pink, $9.50) was a delicious concoction of radicchio and green leaves, orange, beetroot and red onion, dressed in a red wine veaigrette. Despite the protestations of some at the table that fruit doesn't belong in salads, this was a hit - sweet and tangy enough to cut through all the delicious pizza grease. 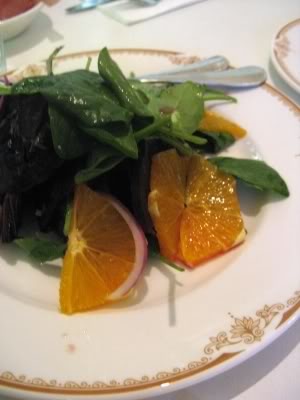 The second salad, ordered for the Ms Pink naysayer, was a typical rocket and parmesan job. It was a generous plateful, and one we might not have ordered if we'd realised that one of our pizzas would look like this: The field of dreams ($15) is a pretty standard vego pizza of mushroom, buffalo mozzarella and garlic, with a pile of rocket and parsley popped on top for some textural variety. As with all the pizzas, the base was perfectly cooked, and all the ingredients were tasty - but on the whole this was probably the least memorable of the four pizzas we ordered. 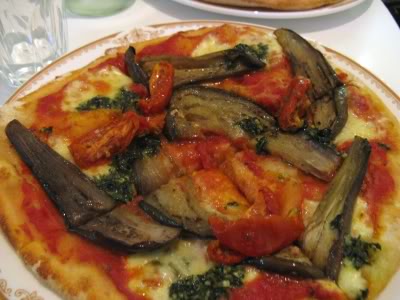 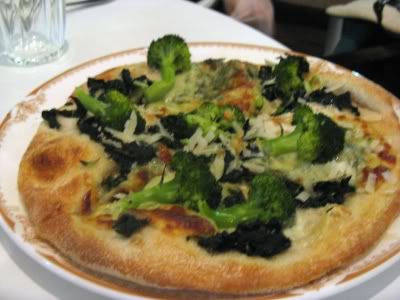 Working in the same genre as I Carusi's broccoli pizza is the Greenpeace ($13), although Bande a Part add tellegio and silverbeet to the mix while dropping off the chilli. Whether it quite measured up to the simpler broccoli, lemon and chilli combo of the Holmes Street pizzeria was contested, but the fact that we were even talking about them in the same breath is high praise indeed. 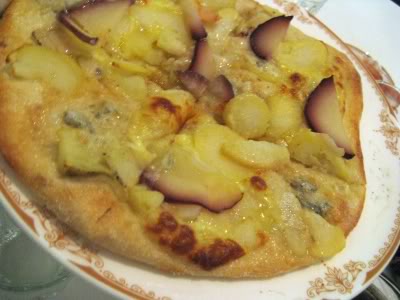 Finally, something a bit wacky: the blue velvet ($15), with mozzarella, bontazola blue cheese, potato and soused pear (Mike and Jo were kind enough to ask for the standard prosciutto from this pizza to be served on the side). This was probably the star of the show, with the pungent blue cheese applied with appropriate restraint and the sweet pears taking the edge off perfectly.

Bande A Part is not a cheap local pizzeria for evenings when cooking is too much hassle, it's targeting the same market as the I Carusis, Pizza Meine Leibes, DOCs and Oskars of the world, and it's delivering the goods impressively. It's fantastic to have a delicious pizza place nearby that you can basically walk into and get a table. The service is great and the pizzas are competitive with the places listed above. It's surprising that, despite being open for more than six months, this place has developed very little buzz (e.g. this is the only vaguely relevant web review I can find). Here's hoping they maintain a nice balance: successful enough to stay open, but not so successful that we can't just stroll up and start eating.