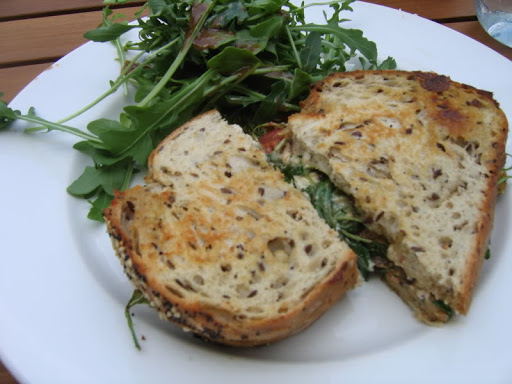 I learned a valuable lesson on Monday - don't go looking for Gertrude Street Grub on Mondays, everything's closed. My initial plan was to stop by the Roti Roundhouse, and my second option (Radio) is also a Monday closure. I was tempted to return to TrippyTaco, but it was too soon for a repeat blog performance. So I settled on Arcadia, a trendy-looking cafe on Gertrude Street near the corner with Smith Street. The lunch options seem to be largely pre-made stuff (salads, sandwiches, a few curries and pastas) in the display case, with a few rotating specials. I opted for a sandwich: roasted eggplant, fresh salad, pesto and feta cheese, and settled in to a seat out on the footpath. Given the sandwiches were sitting, ready-made, in the cabinet, I was a little surprised that it took upwards of 20 minutes for it to come out. Admittedly it had been warmed up and put on a plate with some rocket, and things were kind of busy inside, but I think they can probably do better. The sandwich itself was fine - sizeable and tasty (particularly the creamy, slightly melted feta), but at $9 it was inferior to the $7 offerings at Newtown S.C. and thus a little disappointing. Perhaps I was just grumpy after being thwarted in my quest for roti and then had to wait twenty minutes for a sandwich, but I won't hurry back for a second try.