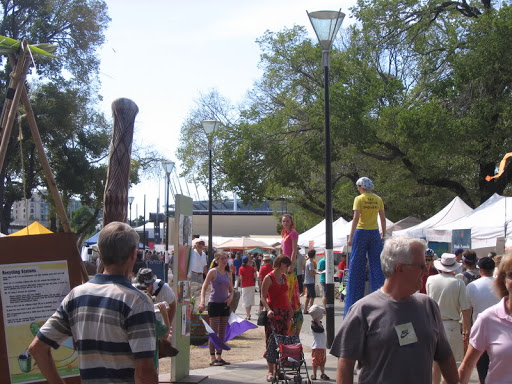 The sweltering conditions continued on Sunday, but Michael and I made an effort to check out the last day of the Sustainable Living Festival. When we arrived at noon we made a slow but purposeful bee-line to an organic cookery demonstration. This was hosted by Sun Hyland of Macro Wholefoods. Our sweaty limbs stuck to fold-out chairs and the hot air hovered around and above us, but for the 40 minutes I was pleased to be there, as Sun prepared seared tofu with olive pesto and shared tips and information, about cooking techniques, organics and sustainable foods. 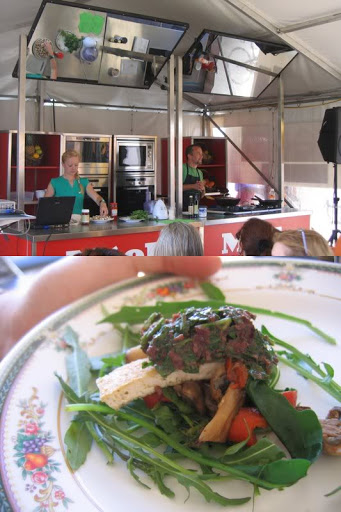 (For example, did you know that most of our garlic comes from China, and is bleached as a preservative? Organic garlic has a purplish tinge and is even more pungent.) I'm sure this isn't any new breakthrough in cooking-demo technology but I thought the mirrors, set above the benches at 45 degree angles, were really nifty: this meant that we could view the bench from above and front-on and get the right angle on all the action. The unexpected highlight was right at the end, where we were all served up a small taste plate! I'll almost certainly be publishing a home-made adaptation of this recipe in the future. 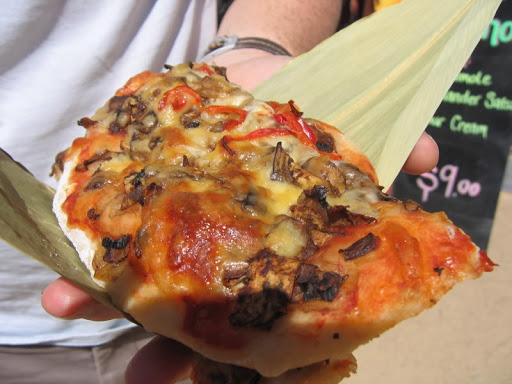 The taster well and truly whet our appetites for the food tents just outside. Almost everything on offer was vegetarian and organic so we were spoilt for ethical choice! A couple of poor sods were cooking wood-fired pizzas and nachos - Michael made it somewhat worth their while by picking up a serve of mushroom and eggplant pizza ($7). I bought bite-sized koftas smothered in spicy tomato sauce ($4) from the two most outgoing Hare Krishnas I've ever encountered. 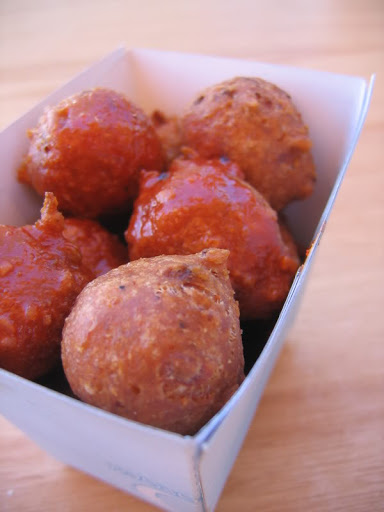 We were lucky enough to find a couple of seats in the shade, and as I speared my firey kofta balls with a toothpick and devoured them whole I began to covet the smoothies advertised on a blackboard at the limits of my reading ability. 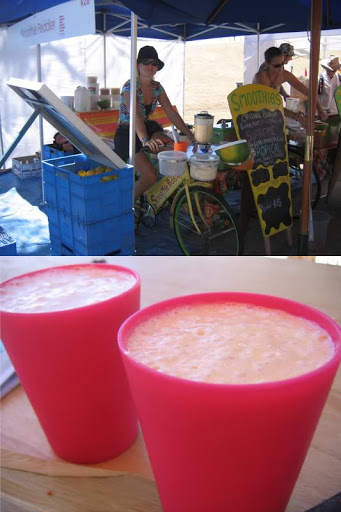 Even luckier for me, Michael was devouring faster than I and willingly joined the line for two mango and nectarine smoothies ($5 each): pedal-blender fresh, ice cold and texturised with real fruit pulp. It was enough to disuade me from an organic ice-cream!
We meandered our way back through the other stalls, featuring energy and water-saving inventions, conservation groups, clothes, cleaning products and cosmetics. With the sun beating down, we didn't give these volunteers and ethical entrepreneurs the attention they deserved. But we collected a few recycled-paper pamphlets along the way, and will hopefully make amends from the comparative cool of home.
Posted by Cindy at 8:41 pm