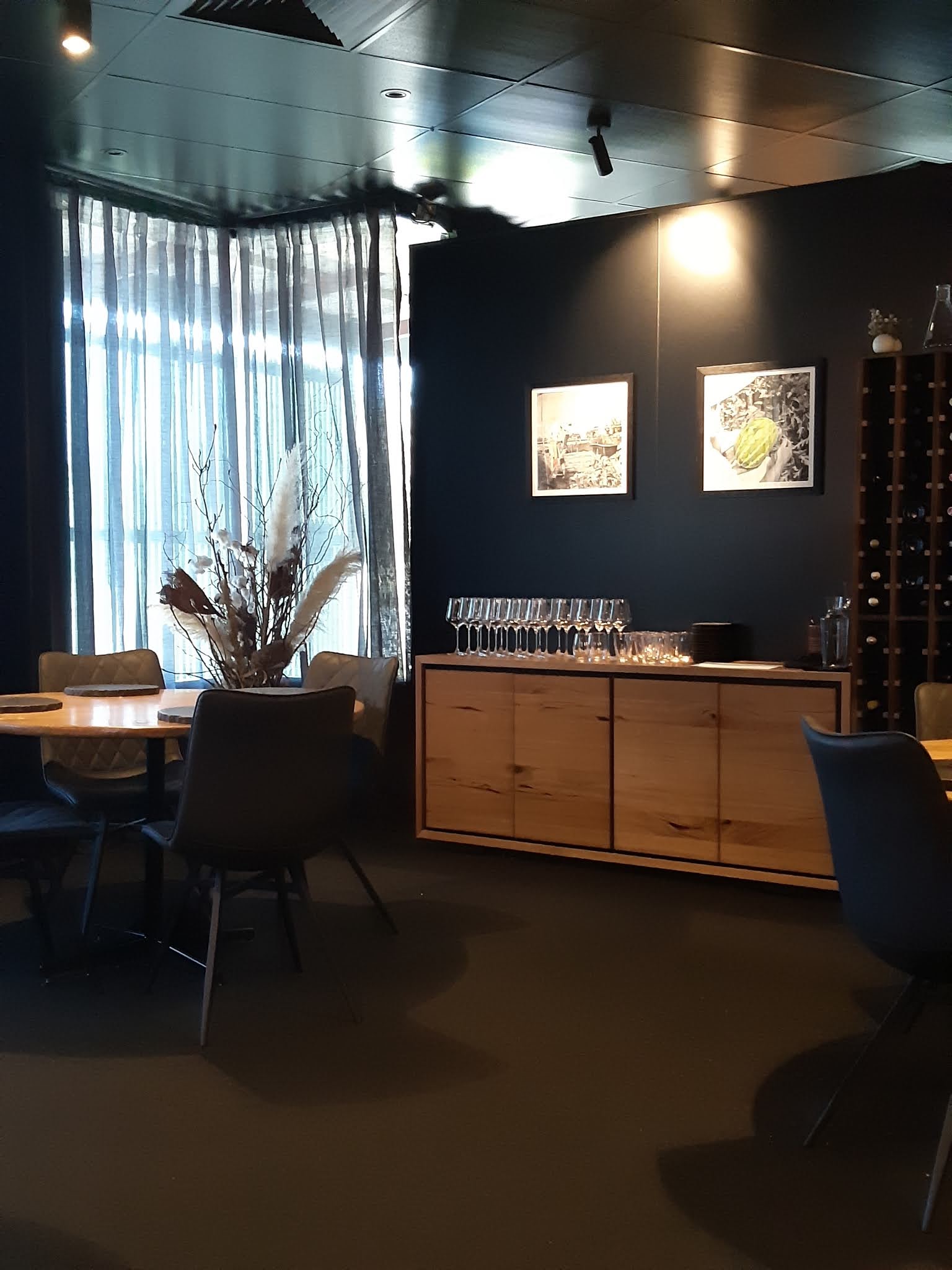 Towards the end of 2020 I celebrated a milestone birthday, and a group of my friends pooled their resources to gift me a future meal for two at O.MY Restaurant. I wasn't familiar with the name, but Yung and Libby filled me in - it's a fancy restaurant accessible by train, with all food intensely focused around the business' own fresh produce, grown on a farm in Cardinia.
The morning after receiving this gift I looked up O.MY's instagram, keen for a preview of their food. I was shocked to learn that they'd recently lost their restaurant to a fire... on their second day of reopening after COVID restrictions relaxed. In a stunning effort, the O.MY team secured and fitted out a new venue within about a month and we were able to secure a Sunday lunch reservation a month after that. 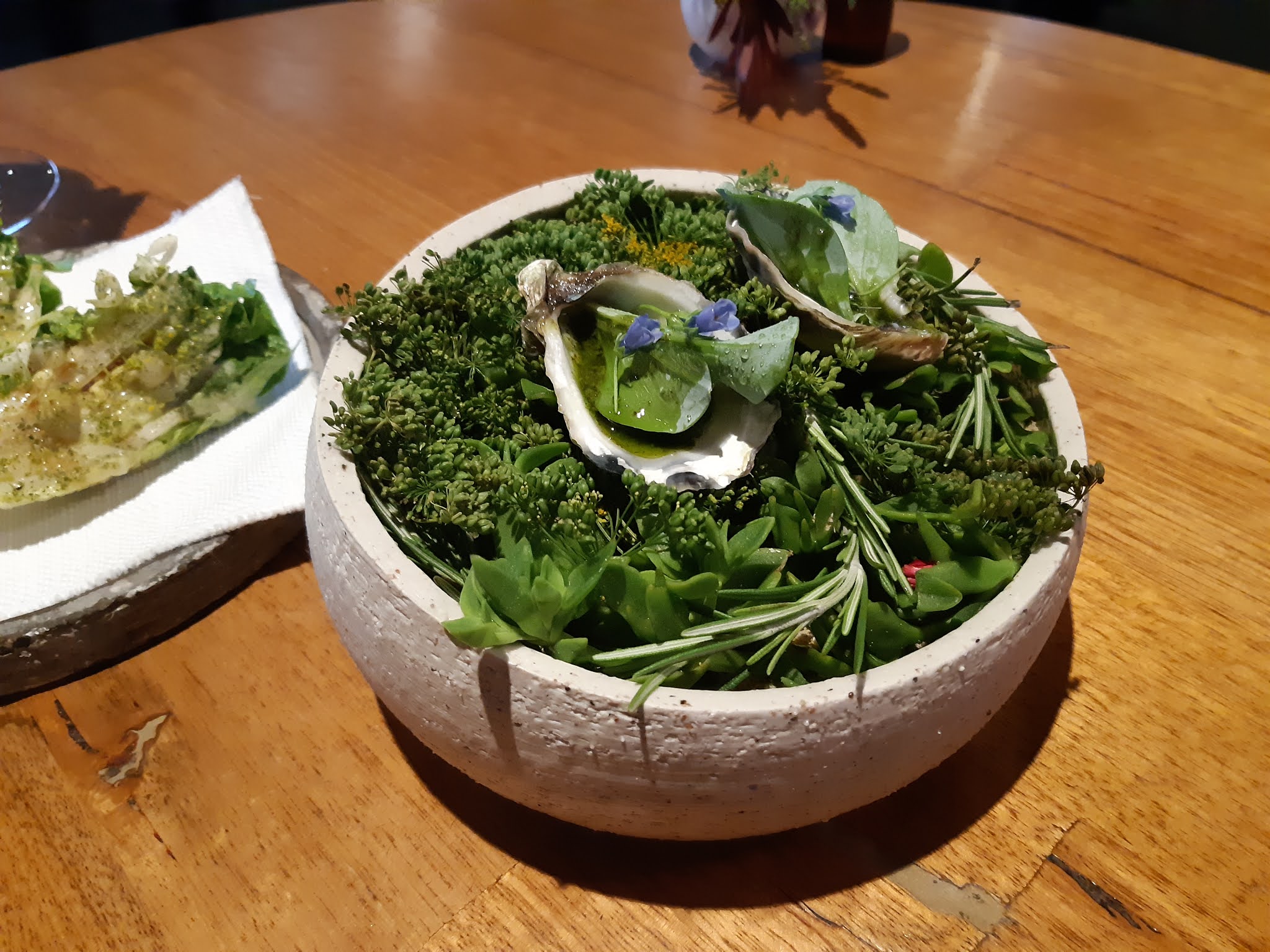 As you can see from the top photo, the decor is dominated by black, including light but closed curtains. The intention is probably to seclude diners from the highway and strip malls outside, and the result is that I was photographing food under artificial light even in the middle of the day. I've decided to share just a subset of the more presentable photos. The dishes are so closely tied to what O.MY harvest seasonally themselves, that you're unlikely to encounter the same dishes anyway! 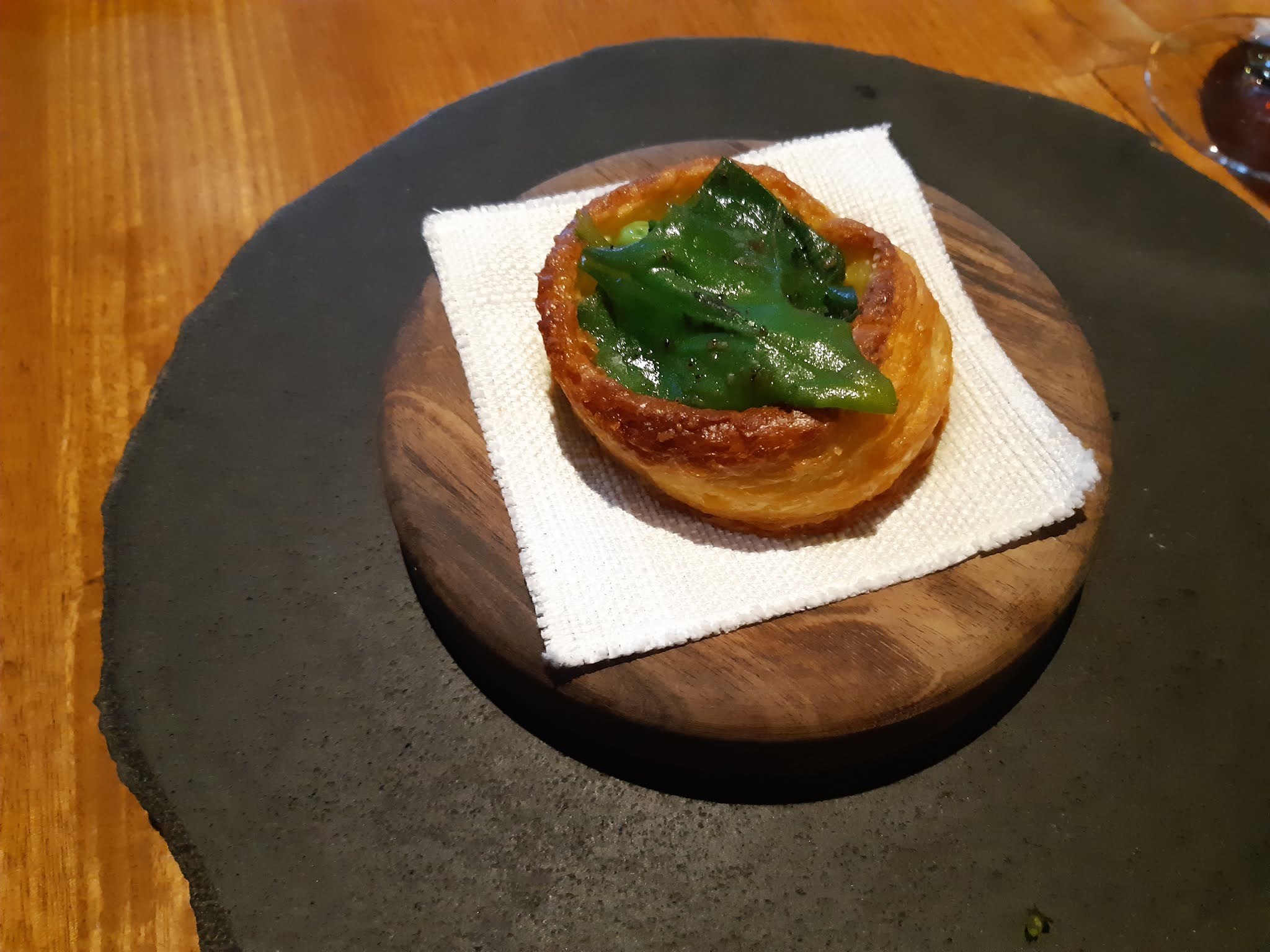 The menu is so changeable that they describe their degustation ($185 per person) as including "between 12 and 25 items". Our first seven were presented without cutlery, a fun and slightly disorienting series that included "garden oysters" (in the post's second photo, dressed with buttermilk and green garlic oil), the freshest of tomatoes, hot-to-handle fried pickles, and Michael's favourite (pictured just above): puff pastry filled with labne, peas, Warrigal greens and more green garlic oil. 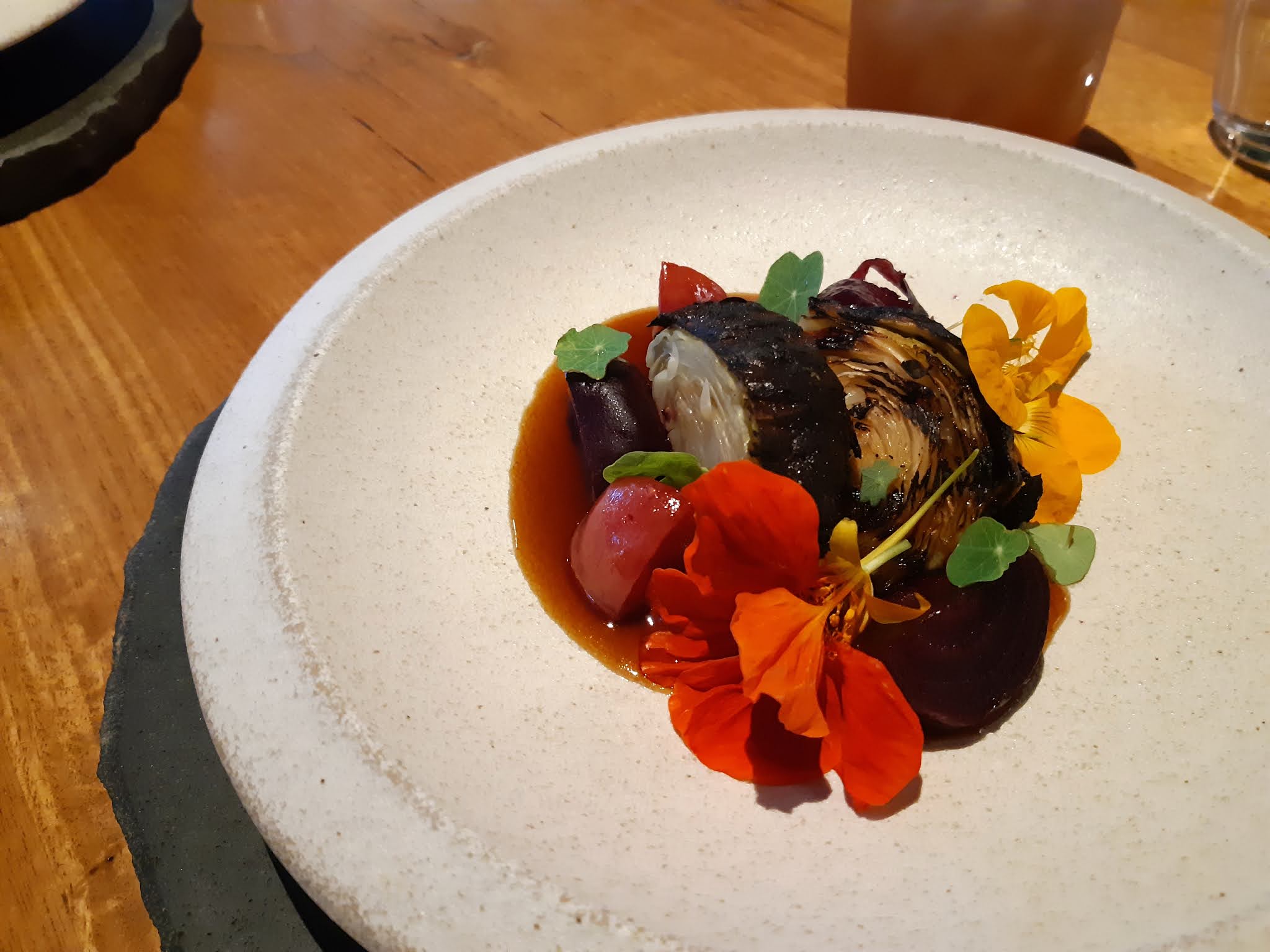 Four savoury dishes were served with more formal implements. The culmination was this plate of roasted cabbage hearts, salt-baked beetroots, plums and nasturtium, all served with a thick, deeply flavoured onion jus. 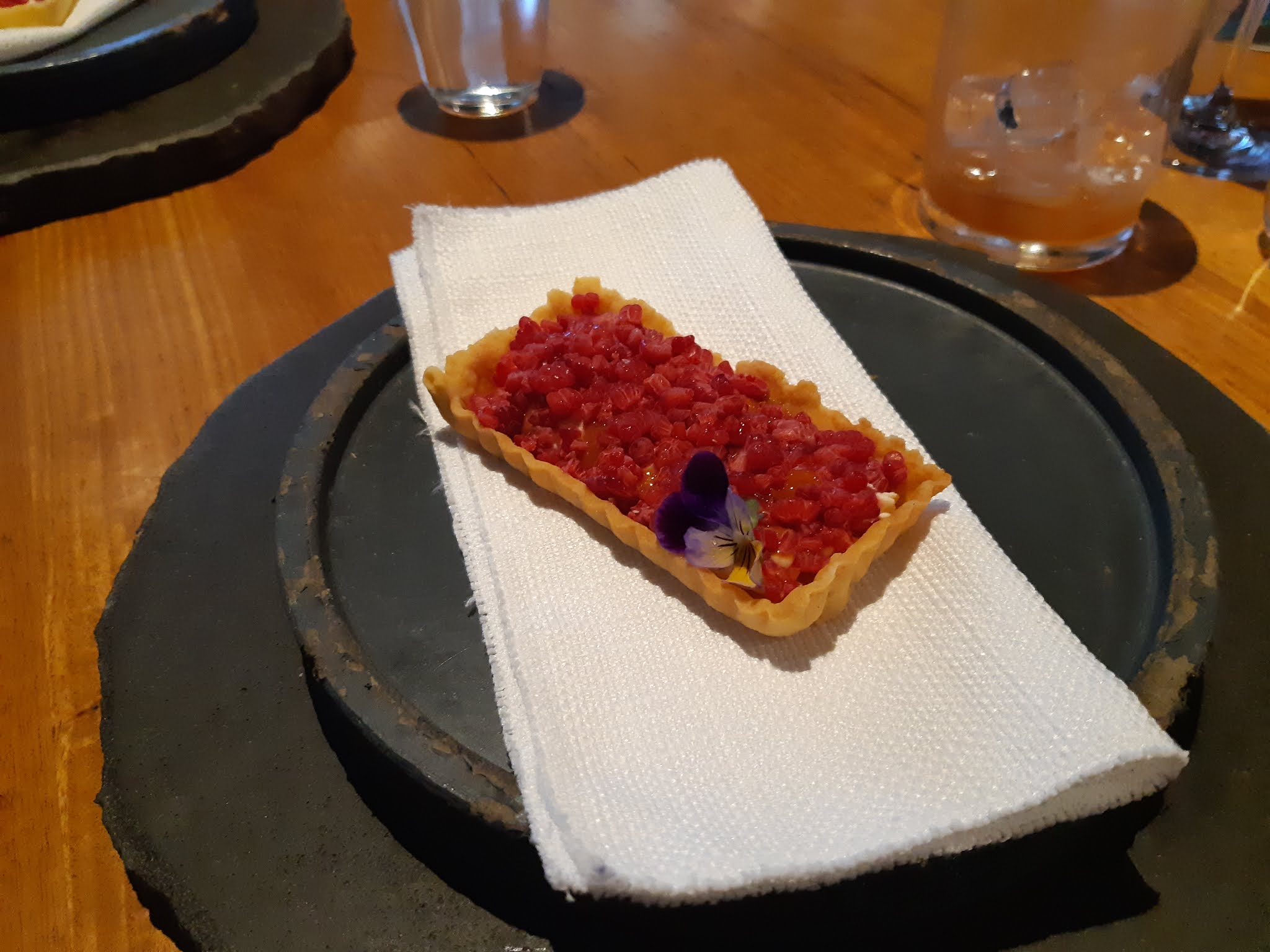 Desserts were also plentiful! We were most fond of the raspberry tart, filled with a little cream and caramel. Our final, memorable mouthfuls were peach halves (pictured below) with local honey and daintily piped cream. 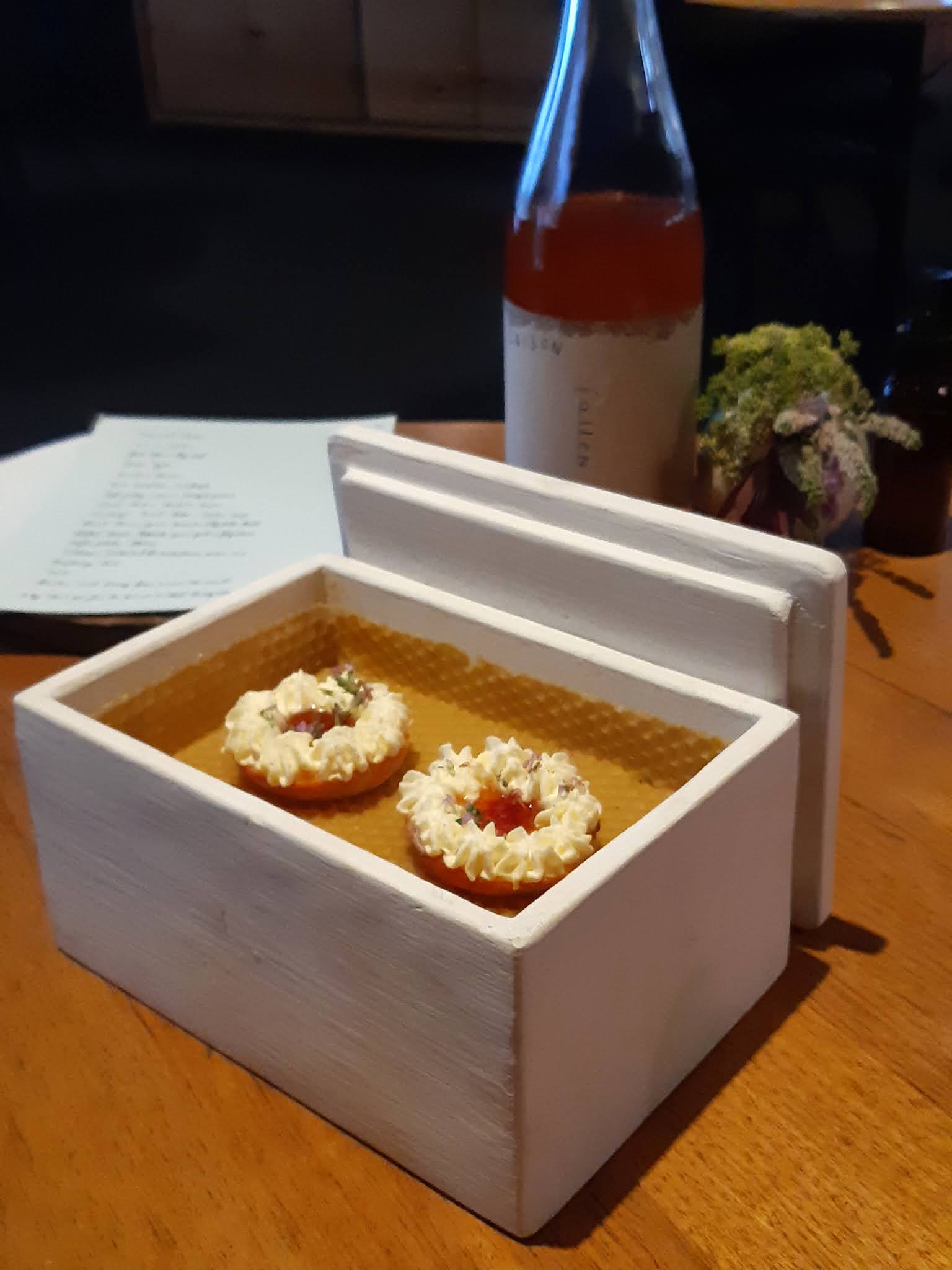 Our visit to O.MY was a very special day out. The centring of produce grown in-house is remarkable, a boon for vegetarians. If there's a downside, it's that vegetarian protein comes from small touches of dairy, with nary a legume in sight. I felt satisfied and not over-full, and I wonder what an O.MY vegan menu would be like. We experienced high-end, attentive table service with an extra youthful, irreverent streak that revealed just how enthusiastic they all are for what they're doing. With two Age hats to their name, O.MY clearly excelling within their niche.
____________
Have a look at other bloggers' reviews to see how the menu has evolved over the years and responded to the seasons. You'll struggle to find a negative word on One Piece Left, ElsewhereBriefly, Around Casey, BLK's Food Blog, Inbetween Desserts, Jacqui's Food Fetish, A Chronicle of Gastronomy, I'm So Hungree, Barley Blog, FoodinFocusz, Dining Without Borders, DAMMIT JANET I LOVE FOOD, and eatmystreet (twice).
____________
O.MY Restaurant
70 Princes Highway, Beaconsfield
9769 9000
menu varies daily
https://www.omyrestaurant.com.au/
Accessibility: To the best of my memory, the entry was flat. Tables were decently spaced, and we received full table service. There are slightly awkward, narrow areas around the entry and on the way to the bathroom that might be difficult for maneuvering a wheelchair or pram. Bathrooms are shared with other businesses in the building - I think I saw an accessible, non-gendered bathroom on the ground level, and I used a gendered, narrow bathroom up a flight of stairs.
Posted by Cindy at 8:47 pm