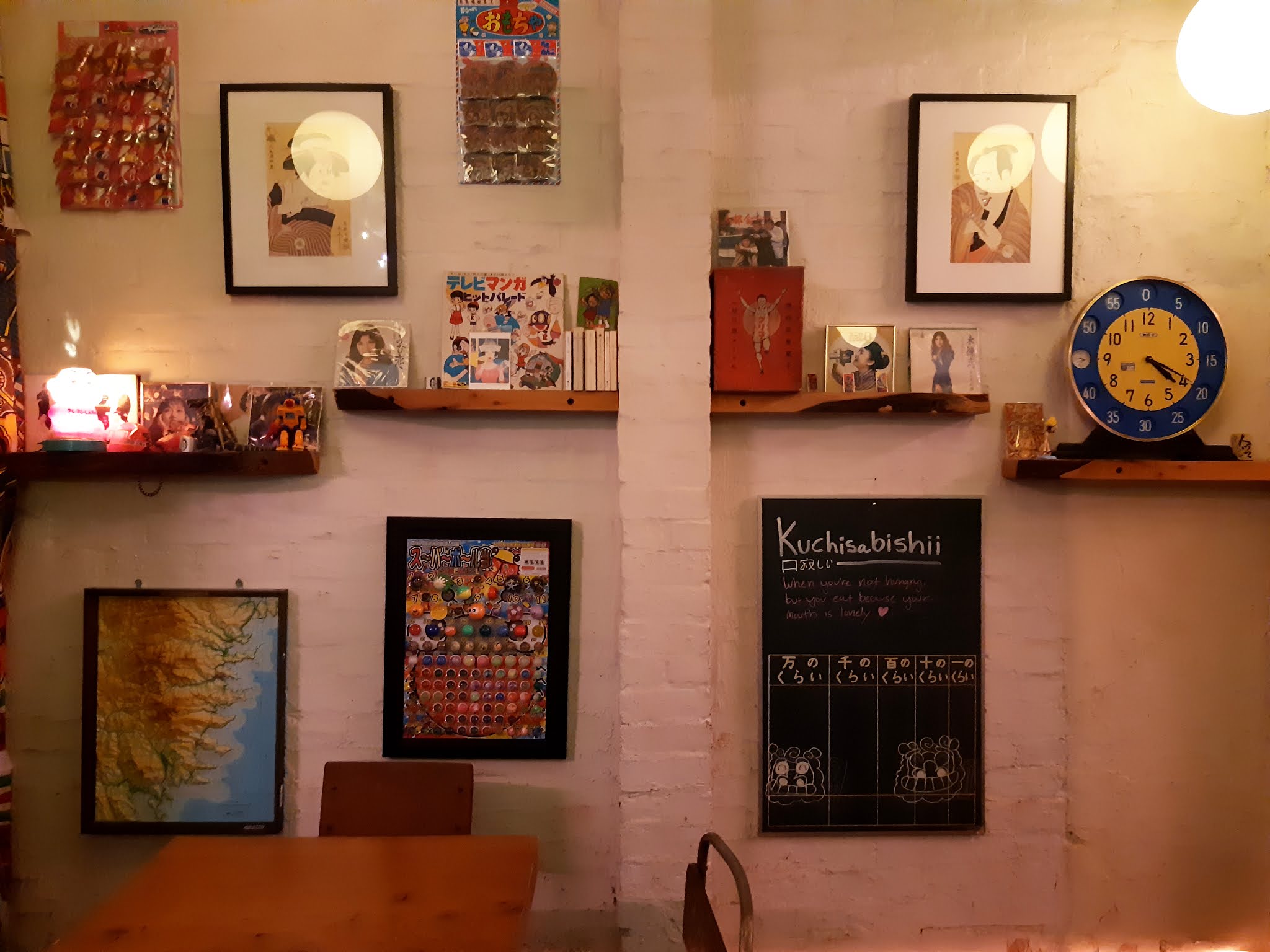 In January we went to our first gig in almost a year! When they're permitted they're now typically at 50% capacity and some artists are compensating by offering early and late shows on the same evening. We happily snapped up early weeknight tickets to see Olympia at the Gasometer (open roof! new seating!), and booked a table at Chotto Motto for dinner afterwards.
Pandemic conditions are having their influence there, too. On the upside for customers, there seems to be extensive new seating outdoors and in their courtyard. On the downside, booking intervals are more restricted. The friendly staff made sure we knew that the kitchen closed at 9pm, and were packing up the furniture around us at 9:20pm. It's fair enough but also a pity - there's something about this restaurant's rosy lighting, cute clutter of knick knacks and snacky foods that would especially suit late night hang-outs. 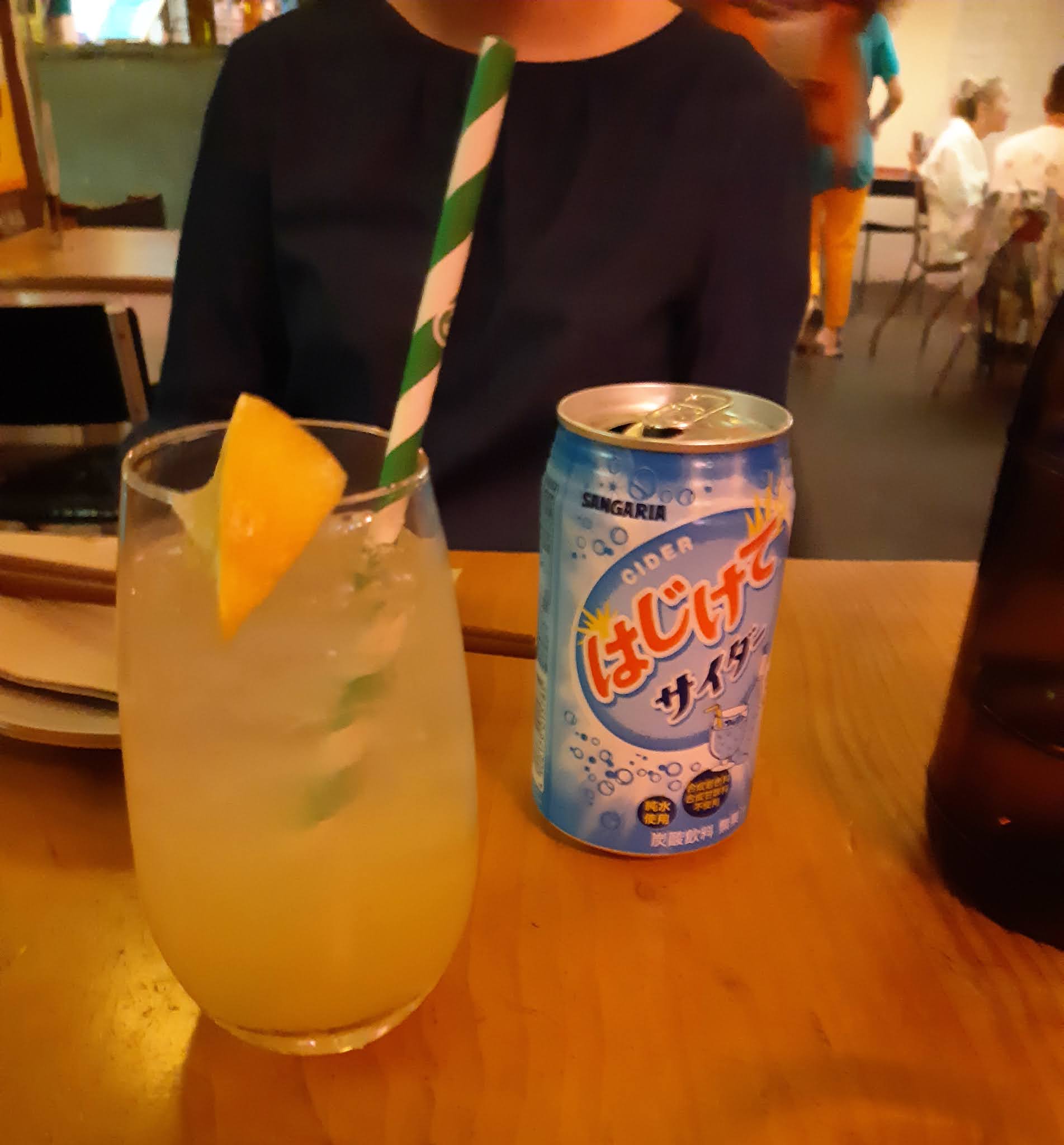 OK, so what of those snacky foods? It's primarily Japanese style here, with Chotto Motto initially attracting attention for its fuzed gyoza 'pizza'. They're serving their gyoza separated and steamed now with plenty options besides (gluten free, vegetarian and vegan options helpfully labelled). The drinks list is fun, too. Beyond the beer and wine, there's plum wine, cocktails, highballs, sake and a novel array of soft drinks. Erin and I took the weeknight gently with a yuzu soda for me (above left, $6.50) and a Japanese Mystery Soda (above right, $5.50) for her; Erin reported that it tasted of bubblegum. 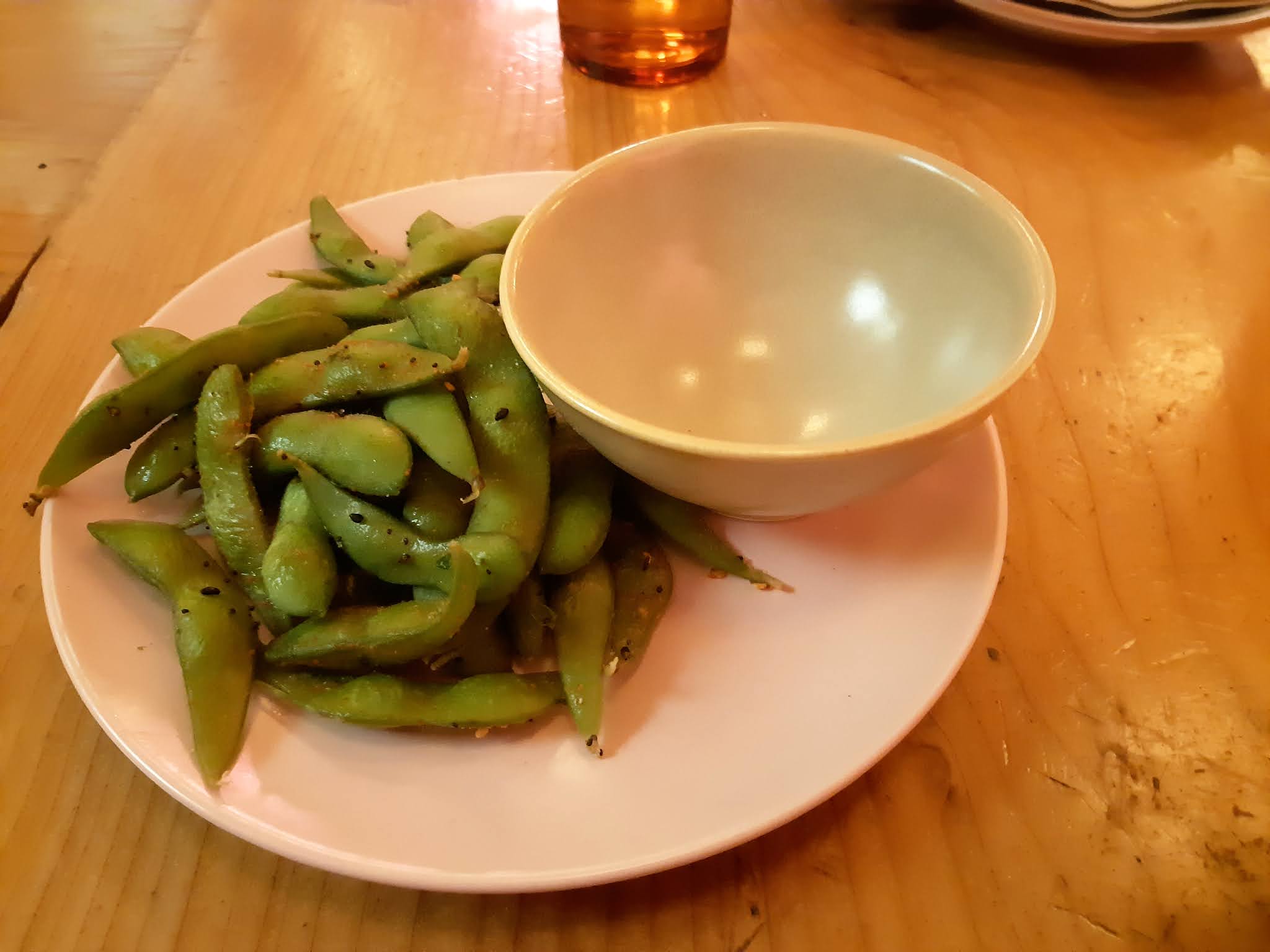 We were unsure how much to order, but with a little assistance from the staff we got it right. The edamame ($7.50) are said to be sprinkled with Magic Spicy Dust Shichimi, which just barely carries through when you're not crunching the pods. 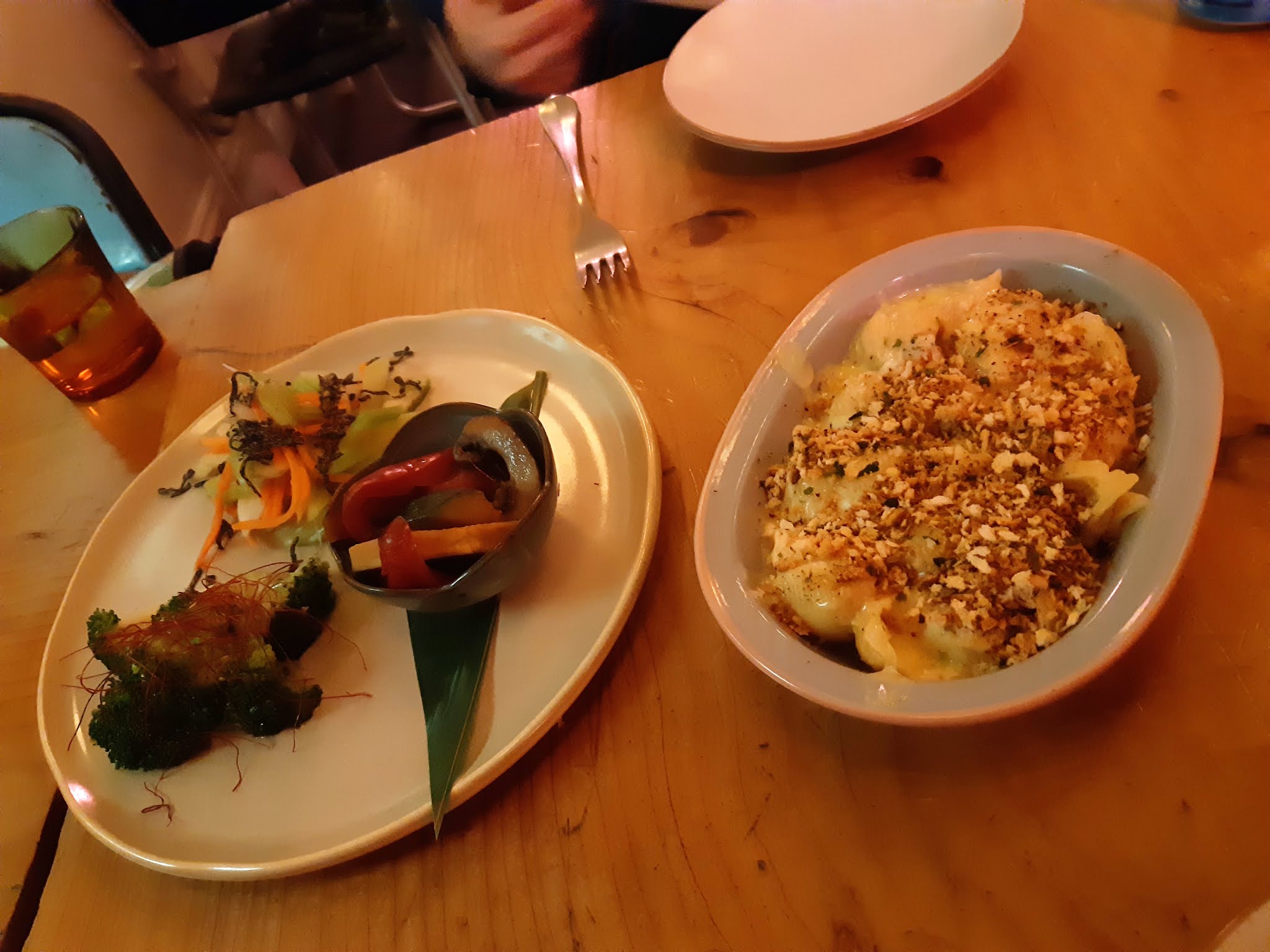 The Saikyo Miso Gorgonzola Mac N Cheese with Aonori panko crunch (above right, $15.50) could've been a disastrous clash of flavours but its funky notes were actually pitch perfect. In the dim light the Mixed Veggie Age Bitashi (above left, $14.50) was a confusing medley of fresh and pickled vegetables (including large quantities of celery?!), but at least it offset the richness of the mac'n'cheese. 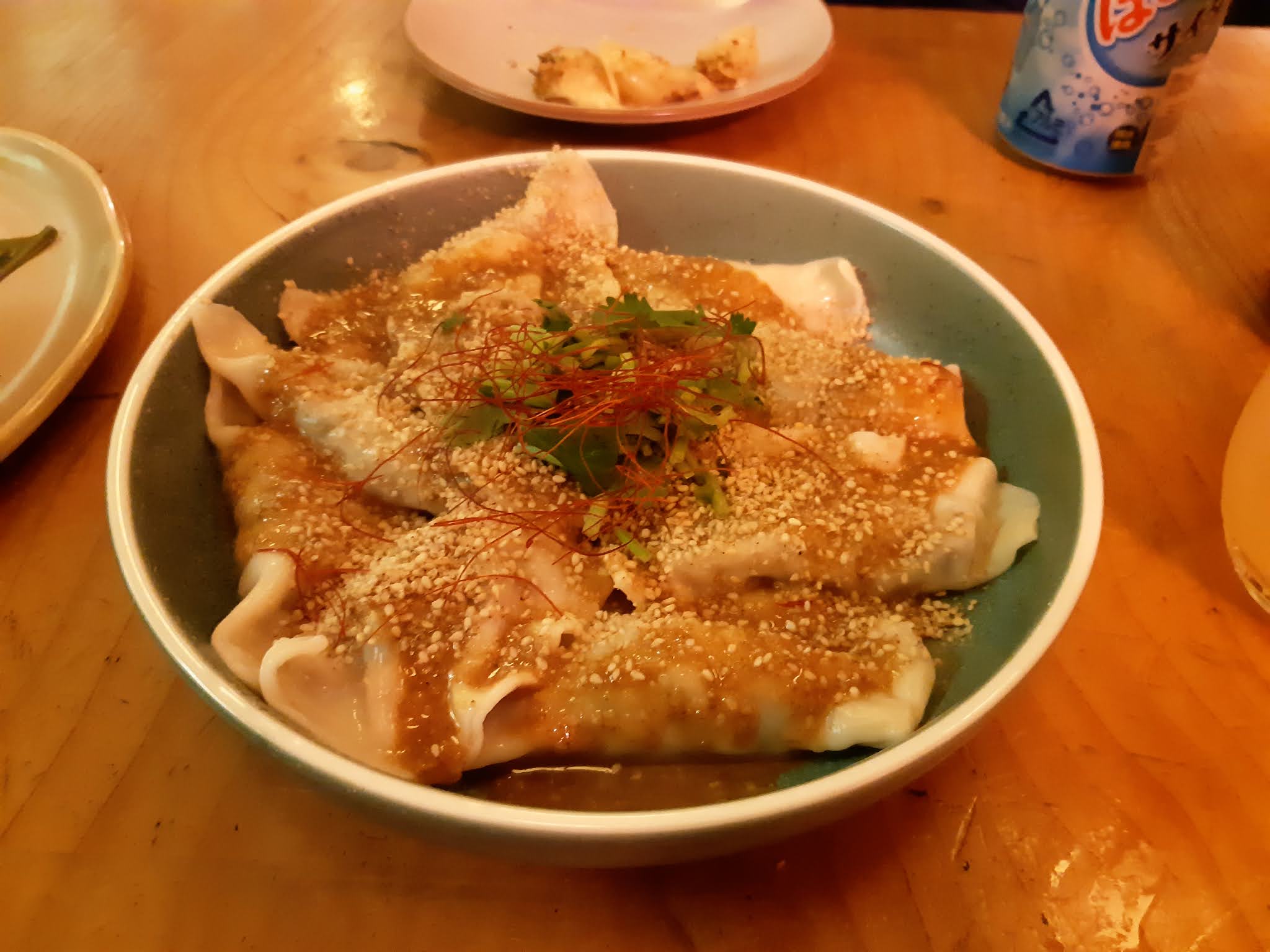 The gyoza, front and centre on the menu, were the final dishes to arrive at our table. There are three sauces and three fillings (only one filling veg*n) to mix and match. We liked their shitake and chive option (10 gyoza for $22.50), though for me the filling was less a feature than the toppings. The roast sesame sauce (pictured above), is mild, gently sweet and generously showered with sesame seeds. 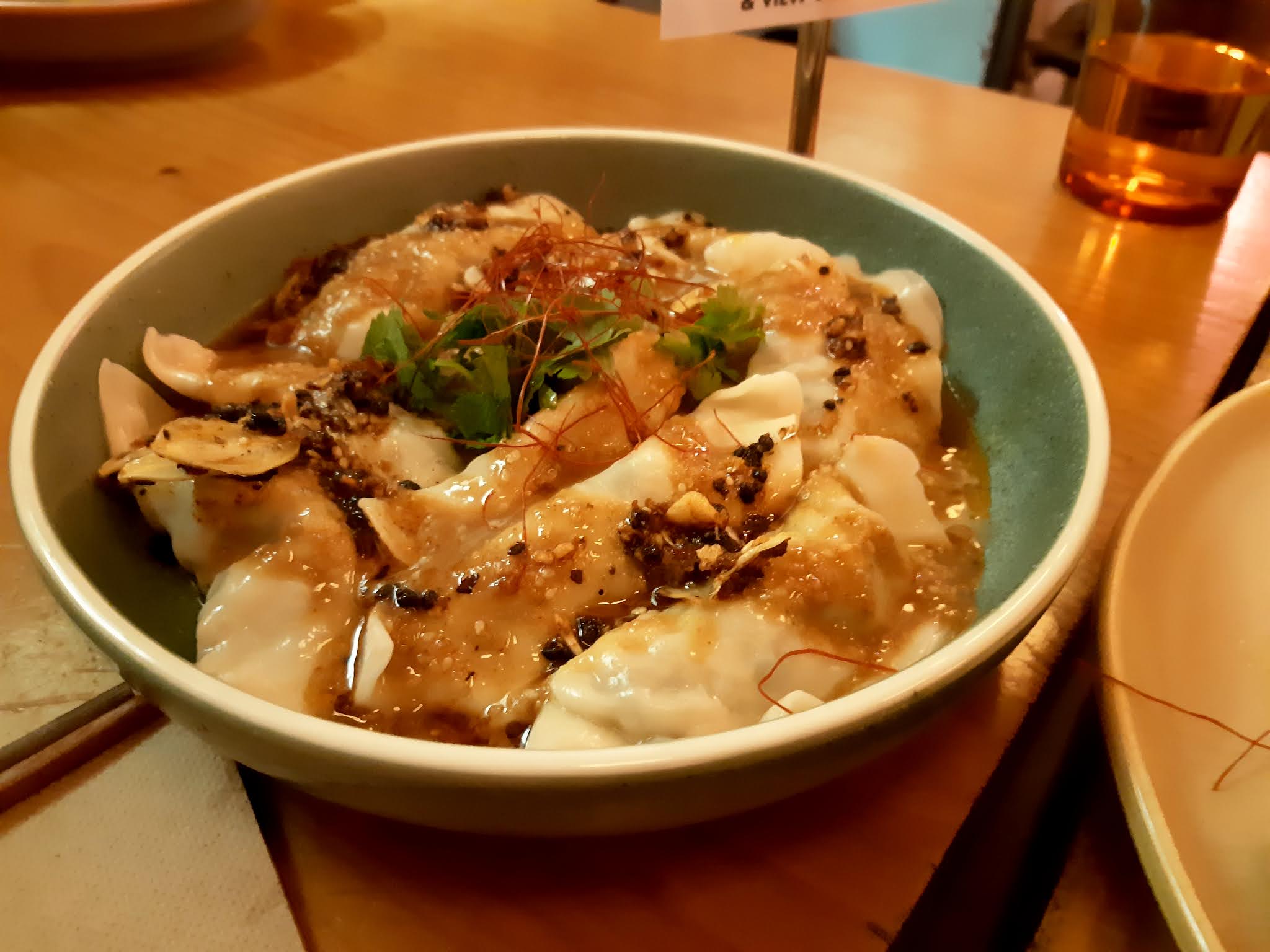 The crispy chilli oil is so popular they sell it in jars on your way out. It's complex rather than hot, with abundant fried garlic and onion pieces, and fermented black beans (it's also vegan and gluten-free!). You bet Michael took one of those jars home.
It was a hot summer night and unluckily for us Chotto Motto's soft serve machine was out of action. We hear that they usually run fun flavours so we'll have to cycle by for another shot soon.
____________
There's a vegan-focused review of Chotto Motto on messy veggies. Omni blogs foodie about town and the sprinkler are fans, but Linnie Eats All The Food not so much.
____________
Chotto Motto
287 Wellington St, Collingwood
0466 054 911
food, drinks
https://www.chottomotto.com.au/
Accessibility: There's a tiny lip on the door on entry. At the moment there's seating out on the street, inside and out in the courtyard/garage. The tables I saw were well spaced from each other, but often located in somewhat cluttered or crowded nooks. The indoor lighting is low and red-tinted. We ordered at our table and paid at a high counter. We didn't visit the toilets.
Posted by Cindy at 2:59 pm