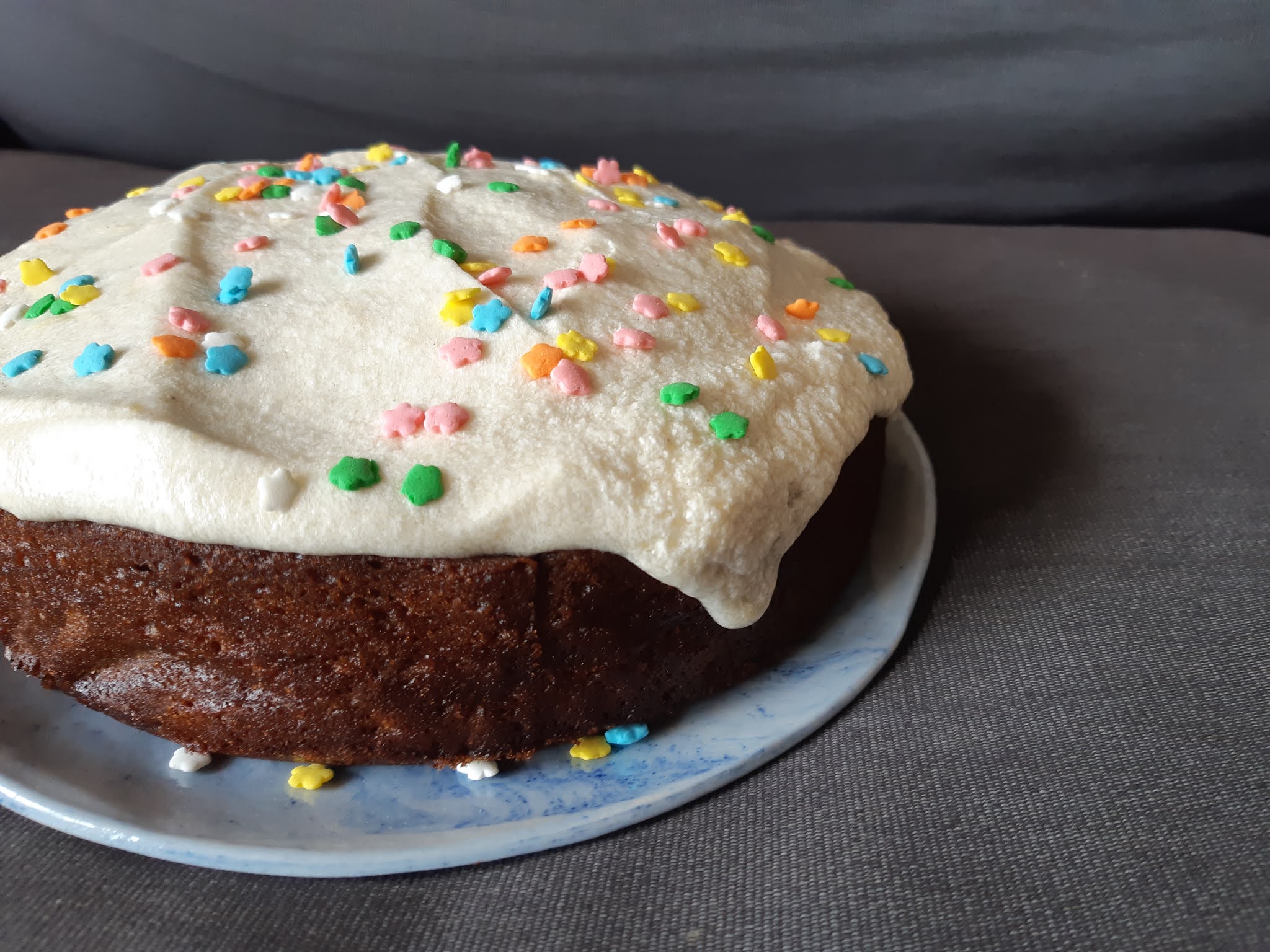 I keep circling back to cream cheese in my pandemic baking. It was what had me pulling up this 2008 VeganYumYum recipe from the depths of my bookmarks (never mind that I already baked another gingerbread cake a couple of months ago!).
The original recipe was made for Christmas, constructed as pretty layered individual serves with fluted clouds of piped icing. I just wanted a single, simple cake and I deferred the layering decision until after it was baked, ultimately deeming it too flat to be bothered with. However, the flavour was anything but flat! Even as I replaced the recommended molasses with a jar of treacle I had on hand, the cake retained a dark, minerally taste. I strategically baked the cake only until it just passed the skewer test, and it was exactly as dense and damp as I was aiming for.
It's just too bad that my vegan cream cheese icing flopped. It's my second setting failure with the Made With Plants brand, and I might have to give it up. I just don't get it! It's near-solid in the tub, I whip it with margarine and sugar and no liquids and even store it in the fridge for days... it's sloppy, and a bit curdled-looking. Boo. I halved the sugar in this icing recipe and it was still too sweet for me, so I need a whole new plan for crowning this cake in future. Suggestions welcome! 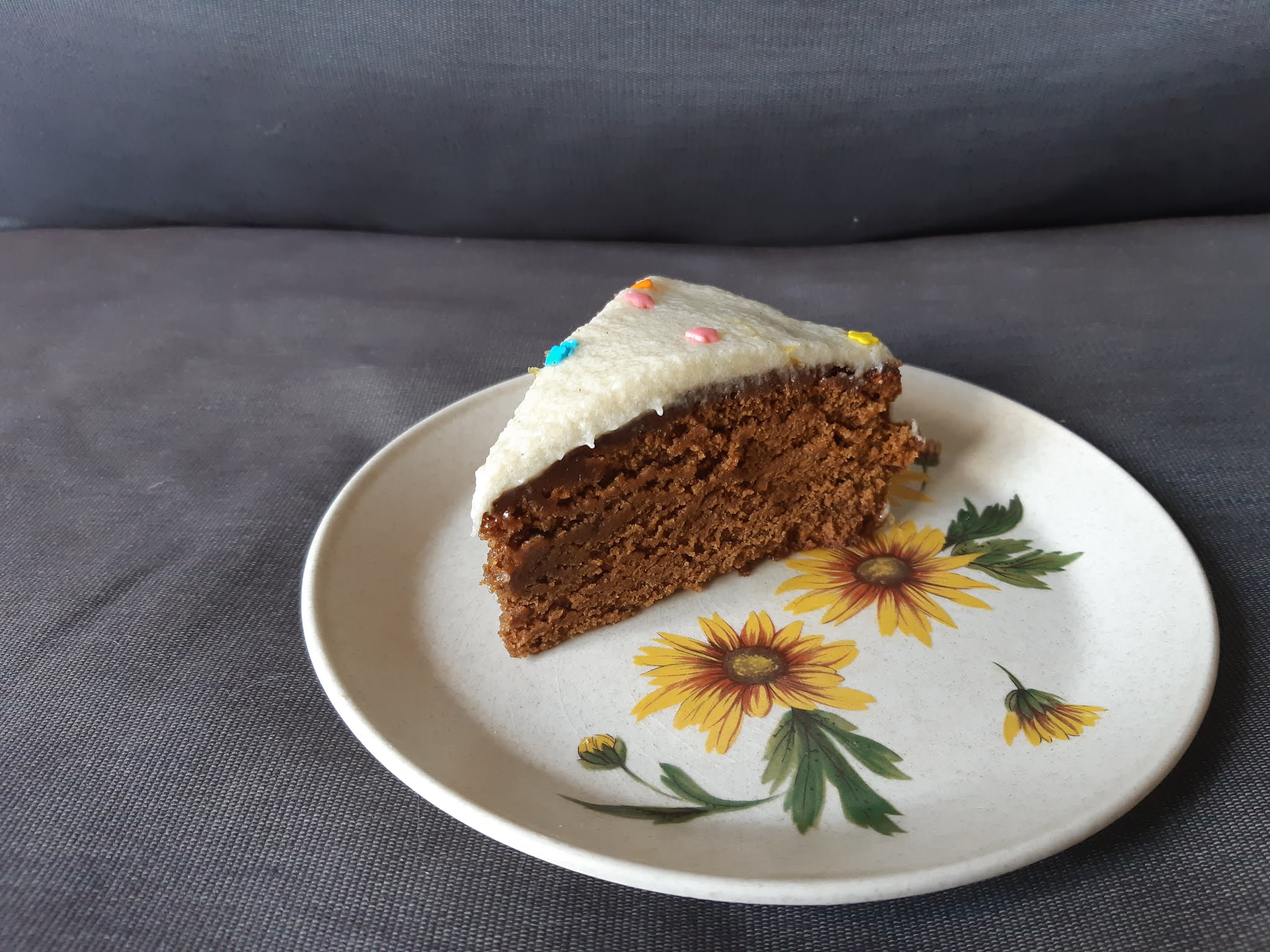 Ginger & treacle cake
(slightly adapted from VeganYumYum)
cake
1 cup treacle or molasses
2/3 cup hot water
1/2 cup margarine
1/2 cup brown sugar
1 egg replacer (I used Orgran)
2 cups plain flour
2 teaspoons ground ginger
2 teaspoons cinnamon
1/2 teaspoon salt
1/2 teaspoon bicarbonate of soda
icing
250g vegan cream cheese (I used Made With Plants and it didn't work)
1/4 cup margarine
250g icing sugar
2 teaspoons vanilla
zest of 1 lemon
Preheat an oven to 180°C. Line a springform cake tin with paper and grease it.
In a small-medium bowl, whisk together the treacle/molasses and hot water, then set them aside.
In a large bowl, cream together the margarine and brown sugar until fluffy. Beat in the egg replacer. Gradually beat in half the treacle/molasses mixture until well mixed. Sift over the flour, ginger, cinnamon, salt and bicarbonate of soda, and beat slowly to combine. Gently beat in the remaining treacle/molasses mixture until everything is well combined.
Pour the cake batter into the cake tin and bake until a skewer poked into the cake comes out clean, about 40 minutes. Allow the cake to cool.
Beat together all of the icing ingredients until smooth, then spread the icing generously on top of the cake.
Posted by Cindy at 5:59 pm