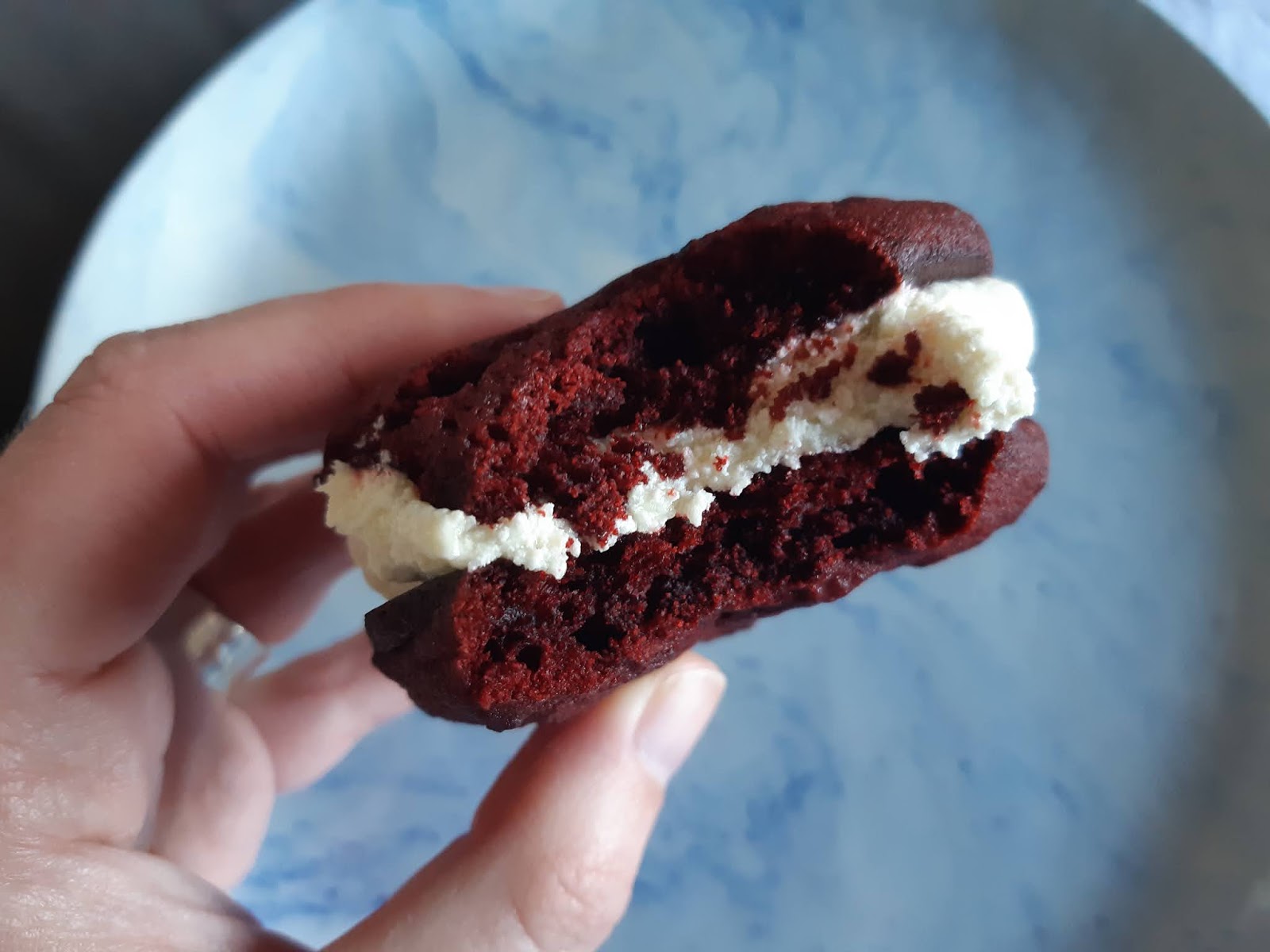 Red velvet cakes don't turn up too often around here, much less red velvet cookies. I think the main appeal for me is actually the cream cheese icing that they typically come along with, and there's plenty of that in the centre of these cookie sandwiches from Crazy Vegan Kitchen. I wondered if I could enjoy a vegan version as much as a dairy-based one. The answer is yes, and better still it doesn't even require soaking and grinding my own cashews.

I don't really enjoy the flavour of Tofutti Better Than Cream Cheese, and it's currently scarce on the local supermarket shelves anyway. Instead I tried Made With Plants for the first time and liked it more - it's made from both cashews and tofu, and the soy flavour is subtler. It has that velvety, not-completely-smooth texture that many cashew-based cheeses and sauces do. That texture had the icing looking a bit sloppy and curdled when I first whipped it up, but it settled right down after I assembled and refrigerated the cookie sandwiches overnight.

As for the cookies themselves, they're full of red food colouring so I'd recommend taking care of your clothing and cooking tools as you bake! I got a bit lazy about sifting my dry ingredients and, while it wasn't disastrous, I reckon it's worth it to avoid clumps of cocoa and bicarb soda. These cookies rise and spread a lot as they bake, and retain a light, cakey texture after they've cooled.

The first cookie sandwiches we ate, just after I'd iced them, were just fine. But as the recipe author Amrita promised, they really come into their own after some time in the fridge. Not only does the icing firm up, but it melds with the cookies, the bicarb soda mellows, and the small dose of cocoa low-key complements the cream cheese. There's more going on than just that bold splash of artificial colour. 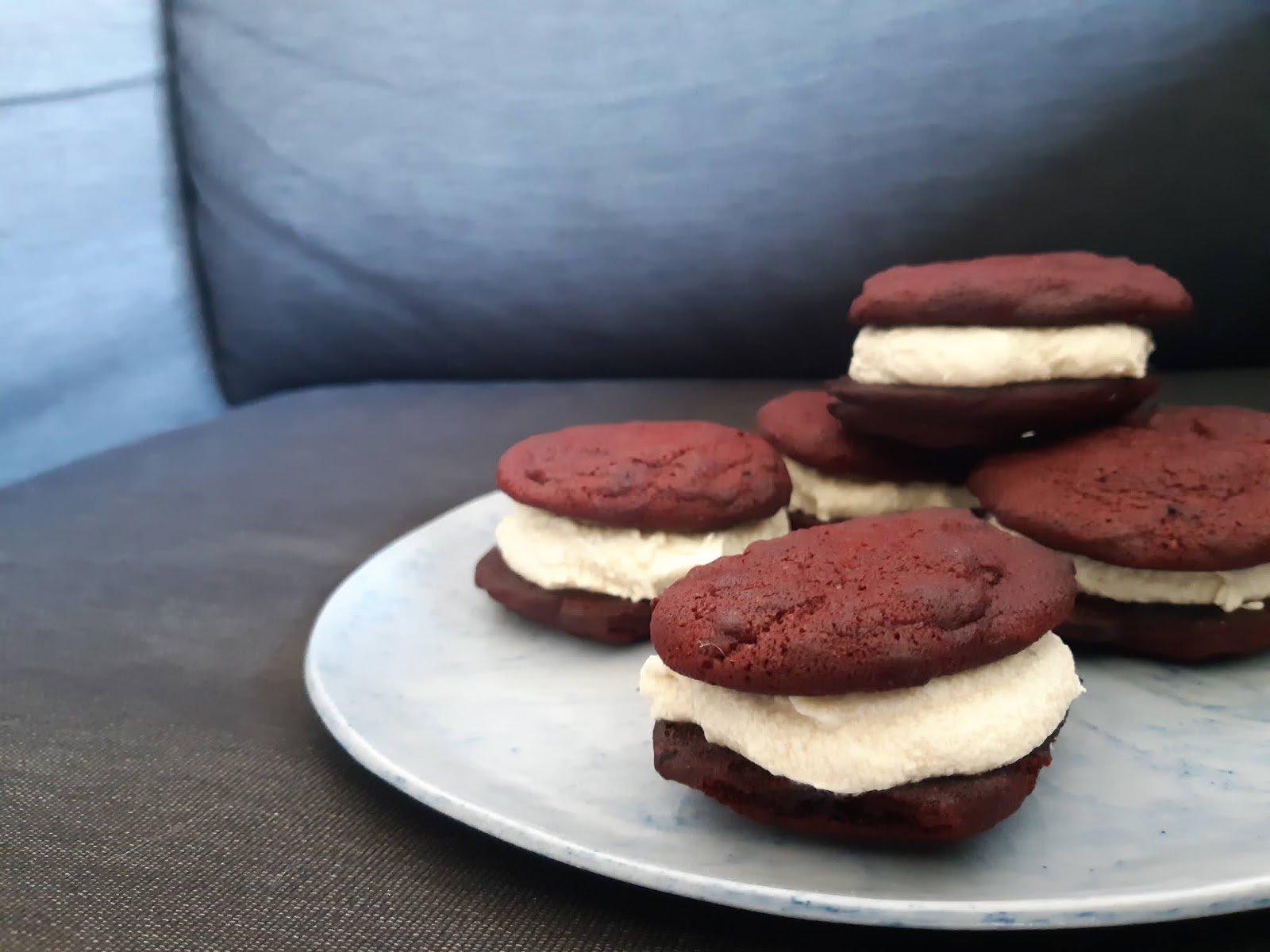 In a large bowl, beat together the margarine and sugars until fluffy. Stir together the cornflour and soymilk in a mug until the cornflour is dissolved, then beat the mixture into the margarine bowl. Beat in the vanilla and red food colouring. Sift over the flour, cocoa, bicarbonate of soda, and salt; beat until just combined. Cover the bowl and refrigerate the dough for at least 2 hours, ideally overnight.

When the dough is ready, prepare a baking tray or two by lining them with paper and spraying them with oil. Preheat an oven to 175°C.

Retrieve the cookie dough from the fridge and scoop tablespoons of the dough onto the baking tray(s), leaving lots of space between them to spread. Bake for 10-12 minutes. Allow the cookies to cool completely. Match them up into pairs of similar shape and size.

To make the filling, beat together the cream cheese, margarine and vanilla until fluffy. Sift in the icing sugar and cornflour and beat everything together until well combined. Spoon the filling onto one half of each cookie pair and gently sandwich the second cookie on top. These cookie sandwiches are at their best after they've had a day stored in the fridge in an airtight container.
Posted by Cindy at 5:38 pm