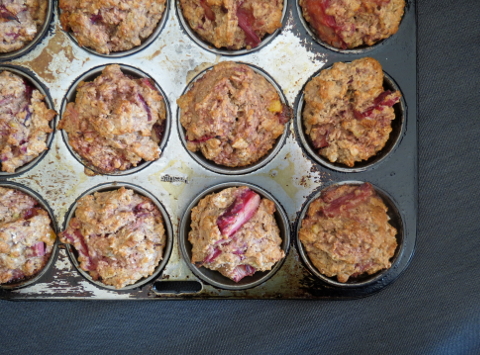 I had some extra rhubarb in the fridge after making that salad, so I put it to work in these muffins. I've made something very much like them before, and blogged about it ten years ago. They were in pretty regular rotation for a while there.

This time around I made them vegan. Soy milk with a little apple cider vinegar instead of buttermilk, ground flax seed slush instead of an egg. This is actually much more pantry-friendly for us, and I didn't notice any difference in the muffins.

Let me warn you that this muffin batter is dense. It's all wholemeal flour and oats, with the brown sugar and spices not doing a lot to perk it up. It's lifted by the rhubarb strips and dots of citrus peel, so it's important to add the full quantity and get them distributed evenly through the batter.

The muffins freeze well and I've been packing one into my bag most workdays, letting it thaw through the morning and then pulling it out to break up the afternoon doldrums.

Preheat an oven to 180°C. Lightly grease a muffin tray

In a small-medium bowl, mix together the soy milk and vinegar. Set it aside to curdle.

Wash and trim the rhubarb; chop into 3cm lengths. drop them into a medium-large saucepan and add the raw sugar. Turn on a low-medium heat and cook the rhubarb, stirring regularly, until the sugar has melted and the rhubarb softens slightly. Set it aside to cool a bit.

Place the flax seeds in a spice grinder and grind to a powder. Add the water and blend until as smooth as possible. Whisk the flax mixture into the soy milk bowl. Whisk in the vegetable oil and brown sugar until well combined. When the rhubarb has cooled somewhat, stir it in too.

In a large bowl, stir together the flour, baking powder, oats, spices and salt. Toss through the candied peel, making sure the pieces are separated and lightly coated in flour.

Pour the soy milk mixture into the flour mixture and stir until just combined. Spoon the batter into the muffin tray and bake it for about 15-20 minutes, until they pass the skewer test.
Posted by Cindy at 9:32 pm