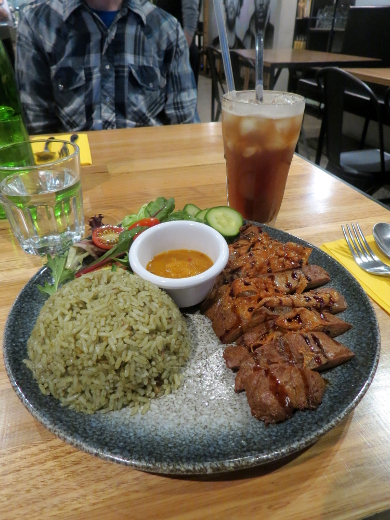 Well, this is a little embarrassing. An all-vegan restaurant opened up at the end of our street and it took over two months for us to notice it! We were quick to grab dinner at The Origin Tales once we'd realised our mistake, and it's now firmly in our weeknight lazy-dinner rotation.

The menu is mostly Chinese-Malaysian, with a couple of burgers and fried snacks (loaded cheese fries, tempura and popcorn chicken among them). Mock meat is abundant, and the couple of gluten-free options are clearly marked.

I was drawn to the Hainanese chicken rice ($15.90) and was richly rewarded. The rice was oily and aromatic, the mock-chicken included a crispy-skinned layer on top (it didn't have the typical poached texture, but was still delicious), there was a little pot of very spicy sauce, and some garden salad to freshen it all up. The raspberry iced tea ($5) was tangy-terrific, too. 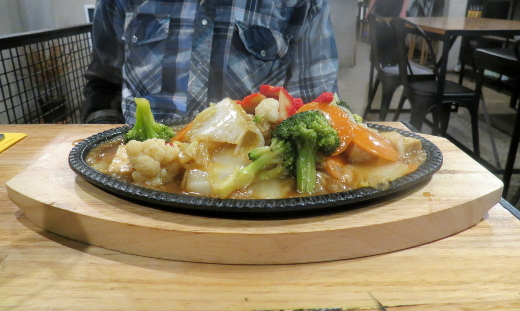 Michael was also rather pleased with the sizzling hotplate noodle ($17.90), which arrived furiously bubbling and steaming. It included heaps of veges in BBQ sauce, and a few pieces of mock-char siew on top. 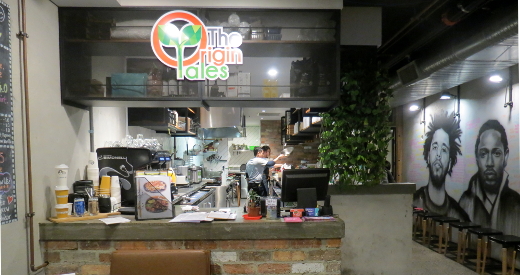 I've since been back for the Zinger Tower burger ($16.90, including chips) and it was one of the best life-after-KFC burgers I've ever eaten (messy as heck, though!). So it's official: The Origin Tales is our new favourite convenience food.


Accessibility: There's a shallow ramp on entry, densely spaced tables and a wide corridor through the middle. We ordered at the table and paid at a low counter. We didn't visit the toilets.
Posted by Cindy at 1:12 pm