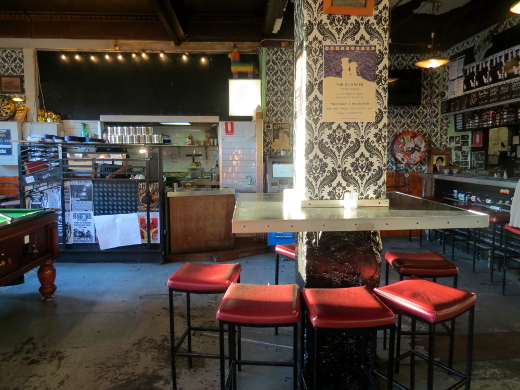 We've been wanting to visit the Last Chance with our mate Jess for a little while, and until this week the best we managed was Michael and I popping in on the chef's night off. On Wednesday the stars aligned at last and the three of us shared a range of their vegan pub dishes before hitting a bluegrass gig.

The Last Chance Rock & Roll Bar is unashamedly a dive. The floor is concrete, the walls are lined with hardcore gig posters, and there's a faint smell of bleach in the air. The kitchen opens at 6pm and the menu is a single page of junk food: six kinds of burger, nachos, a souva, a parma, chips and a chilli dog. Happily, most of them have a vegan option (and everything vegetarian is vegan). How to eat gluten-free is less clear, though the buckwheat salad (!), nachos and chips might be suitable. 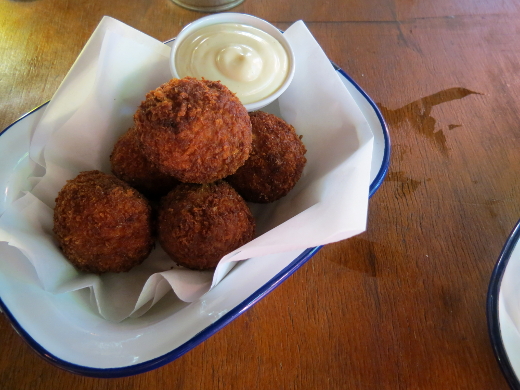 The loaded croquettes ($13) looked like the most refined item on the menu (save, perhaps, for that buckwheat salad). They're gooey with bechamel inside, dotted with corn kernels and spicy bursts of smoked jalapeno. I'm not sure that the aioli is really necessary (but yeah, we used it). 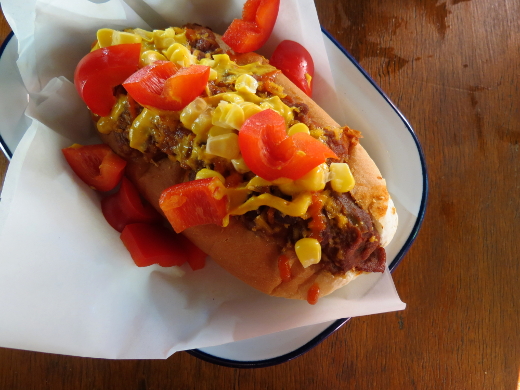 The chilli dog ($10) starts with a robust mock-sausage, which gets smothered in spicy beans, onions, salsa, chilli sauce and mustard. I'm a retiring ketchup-and-mustard kinda hot dog eater, so this was a bit much for me, but this will appeal to those who want more. 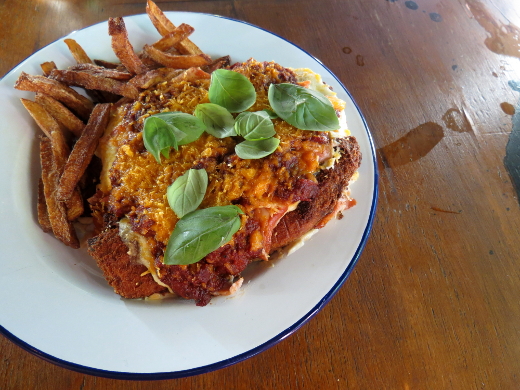 The vegan chicken parma ($16) doesn't appear to have a meat analogue on the menu, and is ENORMOUS. We were all big fans of the fatty mock meat, crispy-crumbed and topped with mock bacon and cheese. The accompanying chips were more modestly portioned, soft rather than crisp and well seasoned - they reminded me more of oven-baked potatoes than fries. Due to the parma's richness and the portioning, I'd be wary of ordering this on my own - chomping down my third of this one was mighty satisfying, though. 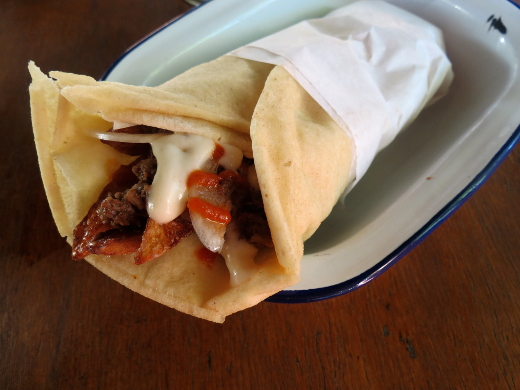 The dish I'd be most likely to order again was the Last Chance souva ($9). It's a doughy little wrap stuffed with braised mock lamb, onions and a few of those soft chips, drizzled with chilli sauce and aioli. It's saucy, savoury, and feasible to eat on your own.

The vegan menu at Last Chance is similar to The Cornish Arms, but they're offering a few nice touches of their own, and lower prices to boot. I reckon we'll be heading back for a burger before you know it.


This bar has received a mixed review on Kittens Gone Lentil.


Accessibility: There's a small step on entry to a flat, open interior. We sat on high, back-less stools, and ordered and paid at a high bar. Toilets are gendered, the men's are down a few stairs; no accommodations have been made with accessibility in mind.
Posted by Cindy at 8:05 am