Notes on a vegan cherry pie 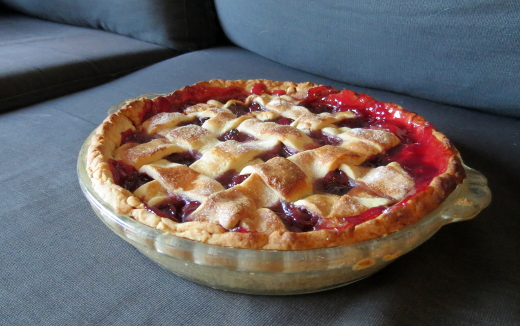 My Twin Peaks cherry pie was so unforgettably good that only a month later I rolled up my sleeves to try making a vegan version. There's just one ingredient that needs substitution: butter. Following discussion on our facebook page, I replaced the butter with the same weight of Nuttelex and set my food processor a-whirring. It melded with the flour, forming a dough without need of any of the water listed as the final ingredient.

Then came the tough part. This vegan crust was easy to roll but impossible to pick up without extensive tearing. I rolled it twice, cursed the heavens a hundred times, and patched it up as best I could. Forming the lattice wasn't much better, with all of my pastry ribbons breaking in one, if not three, spots. For all that angst, my pie was a flawed beauty, just as sweet and juicy and sour and crumbly as the original. (If anything it was even more Twin Peaks-appropriate, with the filling gorily spilling from one side.) 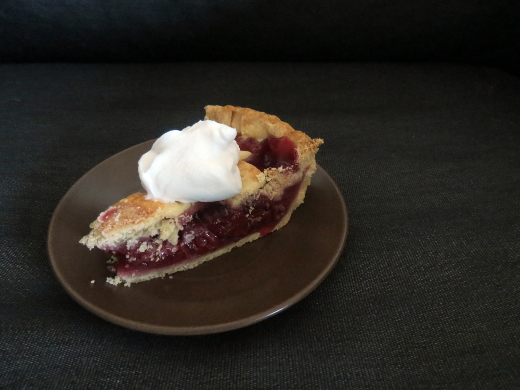 So, what to do from here? Well, in the first instance we dolloped coconut yoghurt on the pie and shared it proudly with friends. A little later I pulled out my vegan pastry reference to compare recipes and reflect. It's possible that I was just rolling my small volume of dough too thin, and likely that my ratio of flour, fat and water was out of whack. Either way, I think the next iteration needs more flour (say, half-to-one cup) and whatever iced water is needed to form a dough. Hopefully this extended note to self will lead to an equally tasty but less fraught vegan cherry pie in... well, maybe one more month.
Posted by Cindy at 5:24 pm