Cherry pie that's worth a stop 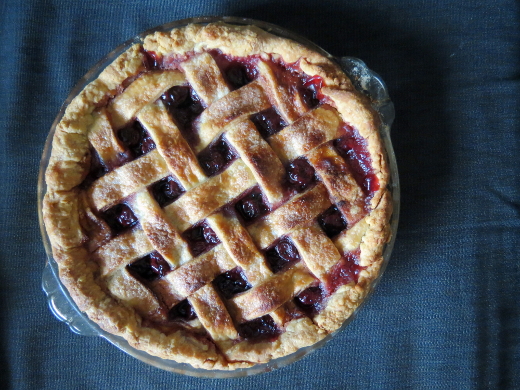 I've really let cult classic Twin Peaks pass me by for the 25+ years since it first screened. I've been so oblivious that I visited Snoqualmie Falls while in Washington last year, soaking up the scenery without any awareness that it's the most iconic landmark in the show. But some friends have brought me into the TP fold in the lead-up to series' highly anticipated third season - we've been meeting up to watch each season's premiere, studiously working through subsequent episodes at home, then reconvening for each finale. Our meet-ups are the perfect opportunity for some themed food. 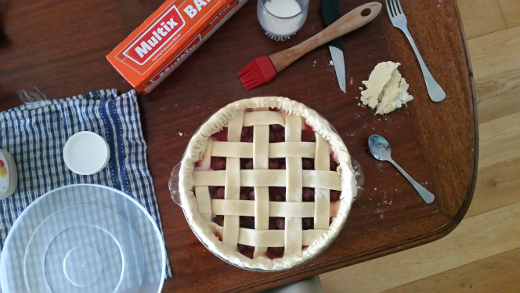 One of the more prominent foods in Twin Peaks is the cherry pie at the Double R Diner. Agent Dale Cooper urges every town visitor he encounters that it's "worth a stop". We're long past cherry season here, but I've always been partial to tangy jarred Morello cherries and there are plenty of recipes online that use them. I picked this one from popsugar almost at random, and was rewarded disproportionately well for my scant research. 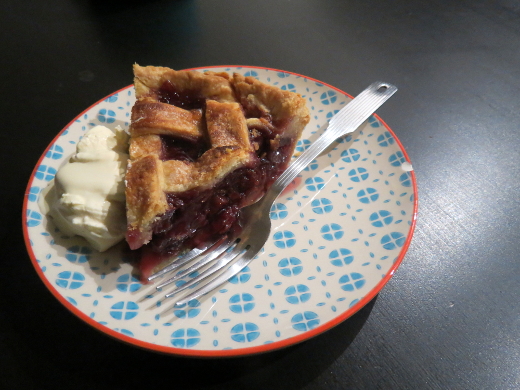 It's a recipe with a crumbly, buttery crust you can whip together in a food processor. The filling stirs up in a bowl and doesn't need any cooking before it hits the pastry. The key effort here is assembly - rolling out and molding the crust, then looping together a lattice over the top. In the oven, the pastry browns fast but the filling needs a while to set. I usually eat pies warm, but I made sure this one had a couple of hours to cool, the all-American way. It was a good decision - the cornflour sets the filling just so, it's sweet and just a little sour, and the drop of almond essence lends it a hint of cherry-cola that's absent from Aussie desserts.


I cannot fault this pie! I'll make it again, and I won't change a thing about it. (Maybe one day, in a fit of generosity, I'll make it with something more vegan-friendly than butter, but that's it.) Regardless of how I feel about the third Twin Peaks season, I'll have it to thank for this remarkable recipe.

Place the flour, sugar and salt in a food processor; pulse to combine them. Slice the butter into cubes and drop them into the food processor; blend until the mixture has an uneven coarse crumb texture. With the blades running, gradually pour the water into the processor through its spout, until the dough just holds together. Turn off the processor. Turn the dough onto a bench and form it into two balls. Wrap them in plastic and refrigerate them for at least an hour.

In a large bowl, stir together the cup of sugar, cornflour and salt. Spoon in the cherries, allowing a bit of the preserving syrup to carry on the spoon, but leaving most of it in the jar. (I recommend flavouring soda water with that leftover syrup!) Fold in the lemon juice and almond essence. Let the flavours sit and mingle for at least 30 minutes.

Preheat an oven for 220°C. Lightly spray a pie dish with oil.

Sprinkle flour over a clean bench and retrieve one of the pastry dough balls. Roll it out to fit the pie dish, with a bit extra to overhang. Gently ease the pastry into the dish, leave the overhang and pop it in the fridge.

Retrieve the second dough ball and roll it out so that it could fit the top of the pie with some overhang. I sliced it into 1.5 cm strips to form a lattice, but you could also leave it in a big flat sheet.

Pull the pie dish from the fridge and spoon in all of the cherry filling. I was nervous about all the liquid I had, but it set up fine once this got baking. Place the top pastry onto your pie; I used the photo instructions on Simply Recipes to make my lattice. Trim any major pastry overhangs and crimp together the edges with your fingers or a fork. Brush the top of the pie with the tablespoon of cream and sprinkle it with the remaining sugar.

Bake for 15 minutes. Turn the oven down to 190°C, and bake for a further 50 minutes. Keep an eye on it and put foil around the edges of the crust if it looks at risk of burning.
Posted by Cindy at 7:18 am