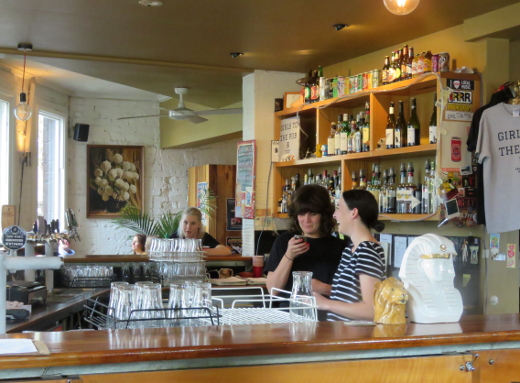 We used to love The Tramway Hotel, it had fancy burgers with vegan options, an open fire and relaxed vibes. The pub changed hands a few years ago and shifted direction slightly, but we'd heard good things about the new menu and have been meaning to go for ages. On Sunday arvo we had the perfect excuse - our friend's band Crop Top were playing a gig, meaning we could combine punk rock and vegan junk food.

The menu is very veg-friendly, with a couple of vegan burgers and a vego one, heaps of sides and a vegan sundae for dessert. We went a bit crazy and ordered way too much food. Cindy couldn't resist the vegan mac and cheese ($12) and friends recommended the vegan mushroom poutine ($16). Foolishly, we also ordered a vegan whipper burger ($15) and the chipotle fried brussel sprouts with lime and coriander aioli ($12 - we weren't sure if the aioli was vegan or not). 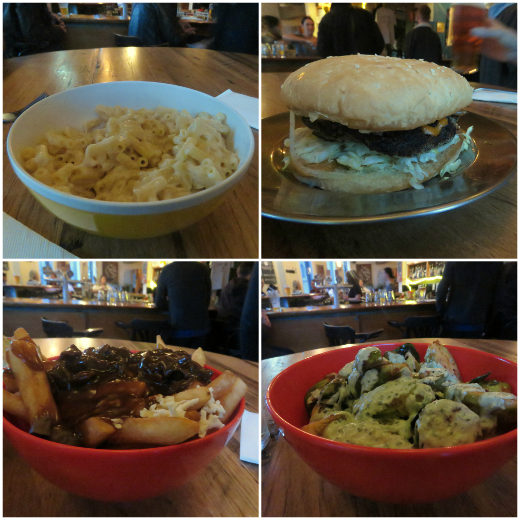 The poutine was out of control, with fat chips slathered in a chunky mushroom gravy and heaps of grated vegan cheese. The mac and cheese was super creamy - I'd have kicked it up a notch with some hot sauce, but we still managed to plow our way through it all. The whipper reminded me more of a Big Mac than a Whopper (although it's more than a decade since I've eaten either) - the bean and mushroom patty was ace, and the pickle, onion, lettuce and special sauce were perfect fast food accompaniments. The sprouts were a welcome serve of veggies, with a tangy, spicy aioli - they weren't quite as well roasted as I'd have liked, but they still did the job. 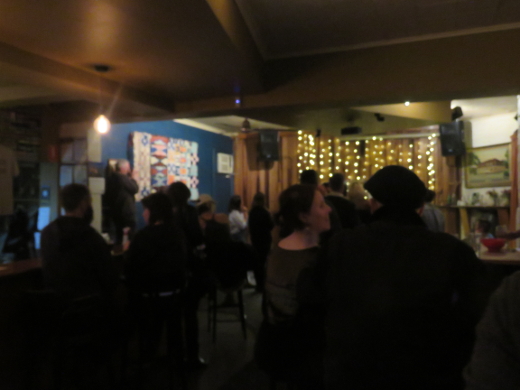 The Tramway's new(ish) incarnation is just as successful as the old one - the food is junkier (in a good way), with superb vegan options. There's a great range of craft beers, a steady stream of local bands playing gigs and a good vibe about the place - it's a brilliant local pub and one we'll be visiting again soon.

Read about our visit to the old version of The Tramway here. The only blogger who's reviewed the Tramway since it changed hands is The Lentil Institution, who loved it.
____________


Accessibility: There's a small step and a fairly narrow door as you go in, but plenty of space inside. Ordering and payment occurs at the high bar. The toilets are outside through a fairly narrow courtyard, and not particularly roomy.
Posted by Michael at 8:35 am