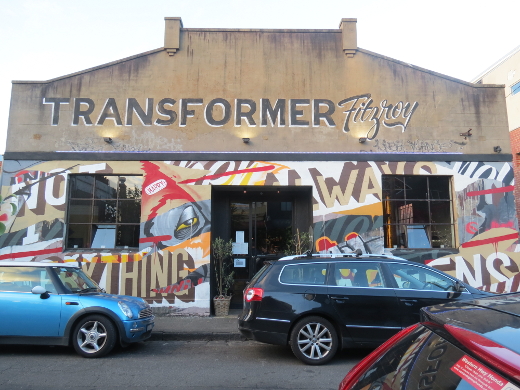 In December an old friend returned to Melbourne for a week. She's vegan, and was equally excited to revisit her old faves (Yong, Casa Del Gelato) and catch up with the new veg eateries that have popped up in the past 3 years. We booked in a Friday night dinner at Transformer as part of the latter project.

To ensure a good spread across the menu, we took our first shot at the chef-selected Feed Me option ($55 per person on a Friday, without dessert) and requested that everything be vegan. 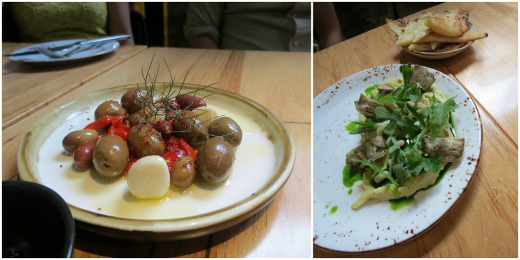 While we picked drinks, we grazed on a small plate of mixed olives, roast peppers, pickled garlic for the brave, and a little chilli. We also scooped up the dip plate with gusto; it was a savoury-creamy arrangement of white bean dip, artichokes and caperberries with an impressively doughy gluten-free flatbread. The bread was pretty great dredged through the olive's marinade too!

These appetisers were rapidly followed with salads. The first was a study in astringency - fennel, grapefruit wedges, green olives, bitter leaves, a vinegar-based dressing and super-salty green wafers. The beetroot carpaccio was very mellow by comparison, crowned with a ball of cooling vegan labneh. 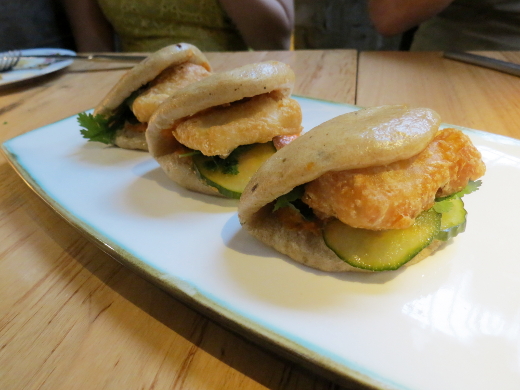 The steamed buns were perfectly balanced on their own, featuring battered tofu, pickled cucumbers and gochujang mayo. 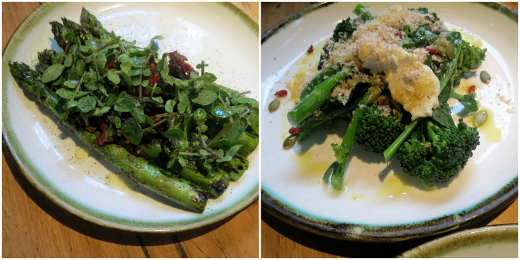 We happily gorged on greens, too! Fat, juicy asparagus spears were flavoured with concentrated little sun-dried tomatoes and mushrooms and topped with watercress; broccolini was simply steamed, then scattered with pumpkin seeds and barberries, teamed with more vegan cheese.

We were ready to conclude there, but the meal's main dish was yet to arrive. It centred on melt-in-the-mouth cumin-braised eggplant in a pool of chemoula, crested with quinoa crisps. A three-rice pilaf with sprouted lentils, chickpeas, pomegranate seeds and fried onion helped us sop up all the sauce.


While individual dishes at Transformer always look expensive, we were satisfied with the quantity of food on the Feed Me menu. We thought the summer selection was dud-free, and all nominated different favourites. In fact, at the end of a week's dedicated vegan feasting, our friend circled back on this as her favourite meal.

I'd report just one misfire in the service. We'd booked an early table that needed to be vacated by 8pm. I was aware of this when booking, and on arrival the front of house told the three of us again, once each, and our waiter mentioned it two-to-three more times at the table. Even when they're politely delivered, hearing "please leave by 8pm!" six-to-seven times had me feeling less than welcome.

Nevertheless, we enjoyed our night at Transformer immensely and it impressed our out-of-town guest even more than we'd hoped. It'll be at the forefront of our minds for future fancy veg dining.
____________


You can also read about one, two of our previous visits to Transformer. Since then it's received positive coverage on Couchfoodies, quinces and kale, kT eats world, Fire & Tea, Skinny Glutton, Champagne & Chips (a partial freebie) and lillytales. There are more negative accounts on Chasing a Plate, A Chronicle of Gastronomy and Eats By DonutSam.
____________


Accessibility: The entry is wide and with a shallow ramp. Tables are well spaced, a mix of mid-height tables with booths and backed chairs, plus higher tables with backless bar stools. There's full table service. The toilets are highly accessible - individual unisex cubicles with marked wheelchair and ambulent options.
Posted by Cindy at 4:37 pm