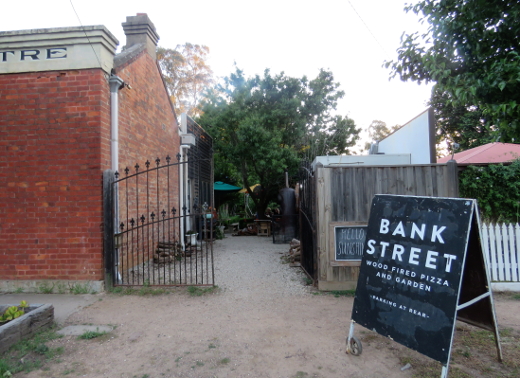 Until last month all I knew of Avenel was its Hume Freeway roadhouse, a stop on the bus route between Melbourne and Albury. Now this town is home to one of my aunts, and she proudly showed us round one weekend in December. We missed the nearby Xmas Twilight Market by a day, and instead walked along the Goulburn River before dining at Bank Street Wood Fired Pizza & Garden. 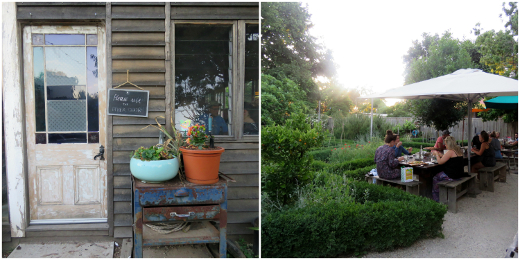 This pizzeria is hardly a local secret. Not only does it appear in local tourist guides, but it's attracted reviews in the city newspapers and definitely requires a reservation on a Saturday night. They make a good first impression - the side-path entry leads to a view of a lovely back garden, before you can let yourself into the renovated bank building to be warmly welcomed by one of the staff. Although they were evidently busy, they didn't mind running through food and wine details with us and everything was served with a smile. 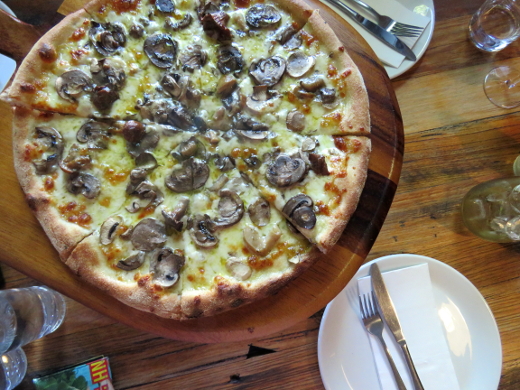 As you'd expect, the menu is dominated by pizza. Vegans and coeliacs will find little-to-nothing that's meant for them, but us dairy-eating vegos are well catered to. Michael was most impressed by Michelle's Magic Mushrooms pizza ($21), which had a heady whiff of truffle oil and some smoked scamorza cheese. 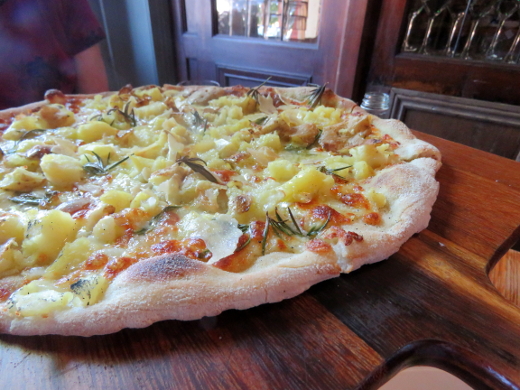 I declared the Smooshed Potato pizza ($21) to be the best potato pizza I've ever eaten. The spud-smashing provides both fluffy bites and crispy golden fragments, and they're interspersed with pungent King River Gold cheese, bubbled parmesan, and fragrant sprigs of rosemary. 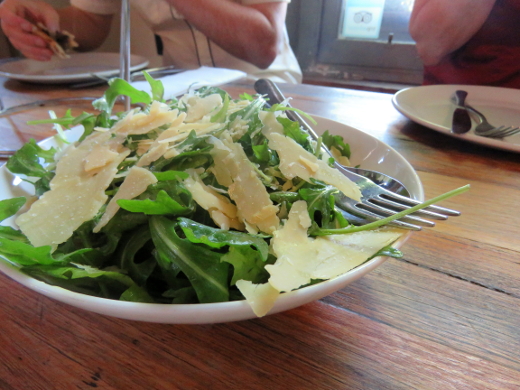 We shared a rocket-parmesan salad ($14), since rosemary just barely counts as a green vegetable. 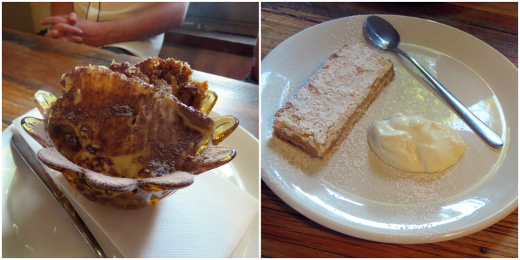 We were having such a good time that we agreed to stow away the last few pizza slices for later, and share a round of dessert. A dolce pizza (filled with Nutella or mixed berries) was out of the carby question but a serve of Cal's Tiramisu ($11) still seemed on theme. It was a hefty, homely serve and I took responsibility for enjoying every last mouthful, even after the other two were defeated. The lemon slice (~$10) couldn't beat Carol's and my shared memory of the one at Albert St Food & Wine, but it was a respectable rendition. 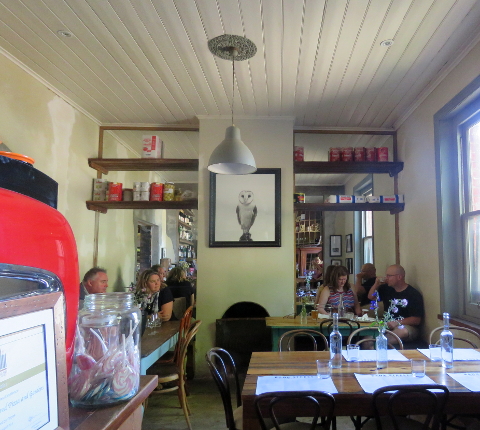 Bank Street is a real charmer, casual yet special. Their menu style would fit inner-city Melbourne with its artisan name-dropping, but it's underpinned by a love of local produce and you won't find garden-sourced ingredients or gorgeous outdoor seating like this in Carlton.
____________


Accessibility: Entry requires making your way along the driveway and up a small step out back (see pictures above). Indoor seating is densely packed with a clear corridor through the middle. We ordered at the table and paid at a low counter. We didn't visit the toilets.
Posted by Cindy at 9:07 am