After the excitement of Smith & Deli's launch, Cindy and I decamped to the Sunshine Coast for a week, missing the madness of the Deli's first week of proper trading. On our return, I got busy making up for lost time.

My first visit on Tuesday morning was intended as a quick stop to grab a sandwich for lunch. On discovering that the sandwiches aren't an option first thing in the morning I decided I'd have to come back later in the day. Still, no point walking out empty-handed. I grabbed a soy flat white and an Egg McMartinez ($7) to tide me over. 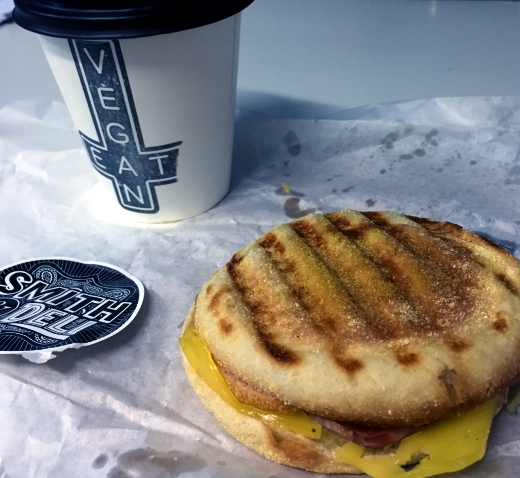 The coffee (by Wide Open Road) was excellent, but the Egg McMartinez was the real star - a deliciously eggy muffin sandwich with a slice of melty cheese and some crispyish bacon. It's a snack rather than a meal, but an incredibly delicious one.


I was back at lunchtime, in the rather long sandwich queue. I'd been hanging for a Godfather (hot chilli salami, pepperonci, mozzarella, roasted peppers and fresh basil, $13). 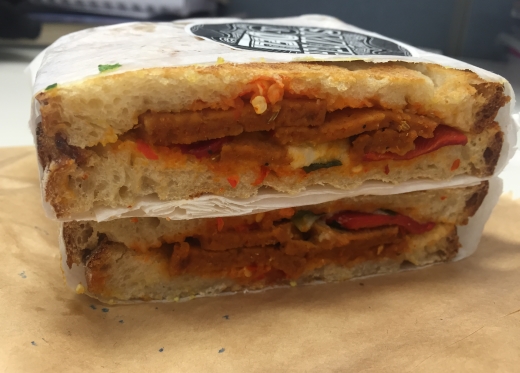 Is this the best vegan sandwich in Melbourne? The Reuben at True North is a contender, and there are another dozen or so to sample at Smith & Deli, but it's hard to see anything topping this - it doesn't hold back on the spice levels, has a pretty convincingly melty cheese undertone and has bursts of basil to accompany the thick salami chunks. Incredible.

I couldn't walk out without some lunch-dessert, adding a maple-bacon doughnut for afters (I've forgotten the price - maybe $5). 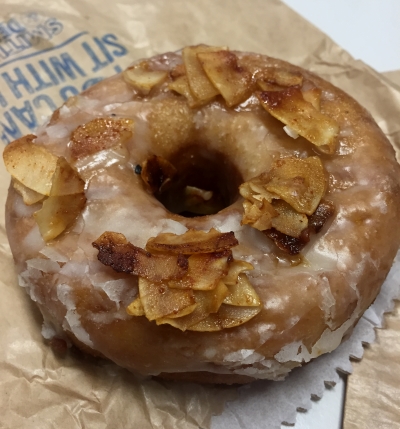 The crispy, salty coconut flakes took a good doughnut and made it great. Vegans now have a challenger in the fancy doughnut trend sweeping Melbourne.

Amazingly, I somehow found myself without a packed lunch just a couple of days later and in need of another visit to the deli. This time I started with the Temple of Doom (turkey, jalapenos, roasted corn, pickled cabbage, cheese and chipotle aioli, $13). 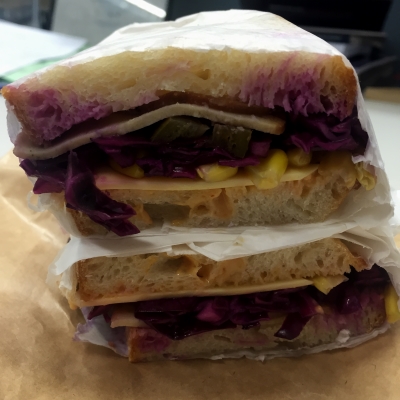 This was a bit of a messier eat than the Godfather, but was similarly great - the combinations on the S & D sangas have clearly had plenty of thought put into them - in this case the pickled cabbage, jalapenos and aioli worked some pretty great flavour magic around the turkey and cheese slices.

I almost ordered another doughnut for dessert, but branched out to sample a challah sticky bun ($7), a rich bun, gooey with some sort of caramel glaze. 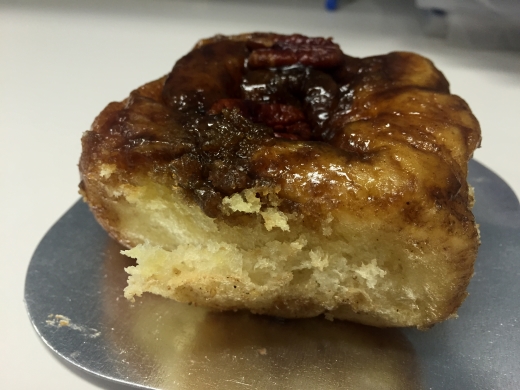 After such a successful run of daytime dining, we finished the week sampling some of the pre-prepared meals for sale in the fridges at Smith & Deli, splitting a pepperoni pizza ($17) and a small serve of mapo tofu ($10). 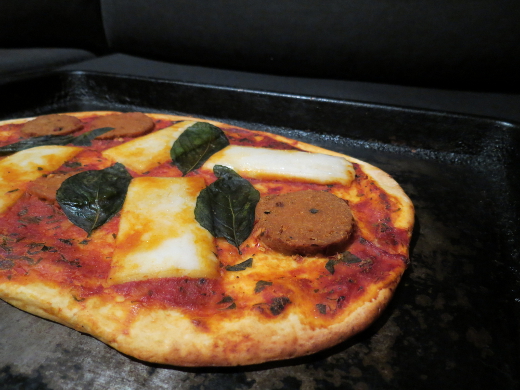 The pepperoni pizza was a simple affair - an excellent thin base, topped with tomato sauce, a few big chunks of salami (possibly the same product that featured on the Godfather sandwich), some mozzarella rectangles and fresh basil leaves. It's a classy step up from the vegan pizzas we recently had delivered from Eat Pizza. In general, pizzas suffer from a vegan premium price-wise, and $17 is a bit of a stretch for this, but mock meats and cheeses don't come cheap. 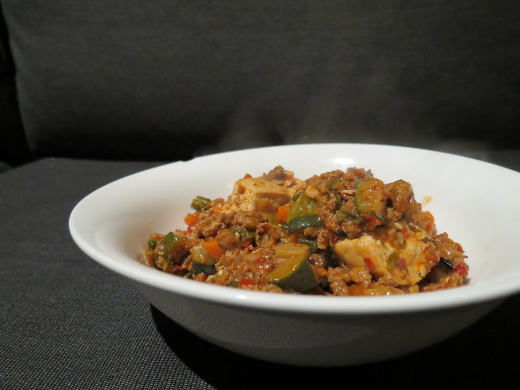 The mapo tofu was gratifyingly similar to the version that I love making, right down to the over-enthusiasm with the chilli, which left Cindy gasping. I can well imagine grabbing a serve of this next time's Cindy's out of town and I'm too lazy to cook - it's really excellent.

The Melbourne veg*n community is losing their collective mind about Smith & Deli and with good reason. It's serving up a stunning array of vegan food, from pastries, sweets and sandwiches, to spices, staples and mock meat, plus a range of pre-made meals for home. Having an office within 500m is going to be an expensive, delicious privilege.

quinces and kale, Little Vegan Bear and Veganopolous all munched their way through Smith & Deli's menu during the first week it was open, while style melbourne, Eat And Be Merry, For Tomorrow We Die(t), table to paper, Veggie Mama and MEL: HOT OR NOT were all at the same freebie launch that we were.
____________


Accessibility: There's a lip on the door and the interior is flat. All foods are easily visible, but some of the groceries are easier to reach than others. Ordering and payment is at a low counter.
Posted by Michael at 6:45 pm