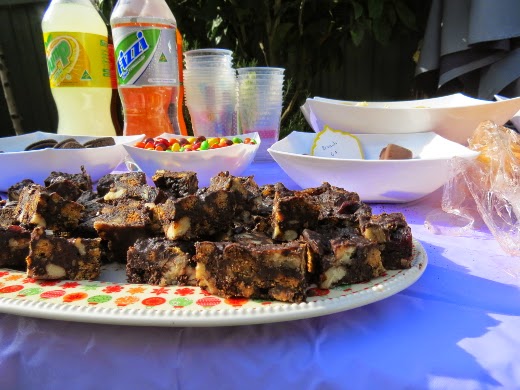 Last weekend we joined in on a big party for a little girl's birthday. Much of the food was expertly catered by the Las Vegan crew, and another guest prepared a cake decorated with fairies and fondant mushrooms. I brought along a tray of hedgehog slice, a fairly common treat from my own childhood.


I don't have a family recipe, but I knew Vegan About Town posted one that I could draw from and adapt to suit my pantry. The whole hedgehog deal was really just a plot to use up two packets of LEDA gingernuts, and it served to polish off some walnuts, cashews and dried cherries too. Best of all, it's an oven-free melt'n'mix method easily accomplished in 20 minutes.

The slice has a great fudgy texture and a much darker chocolate base than the non-vegan versions I've known before. On reflection, it was probably too rich and bittersweet for the kids. In fact the little tackers barely took an interest in the savoury selection or the birthday cake once the candles were off either - they seemed to have eyes only for the bowl of Skittles! That just left us greedy grown-ups to graze on party pies, stuffed potatoes and pastry pinwheels all afternoon.

Gingernut hedgehog
(adapted from a recipe at Vegan About Town)


Crush the gingernuts lightly, so that they're a mix of big chunks and powdery crumbs, and place them in a large mixing bowl. Roughly chop the nuts and add them to the bowl. Stir in the dried cherries.


In a medium-sized saucepan over low heat, melt the margarine. Add the chocolate and stir occasionally as it melts, ensuring that it doesn't burn. When the chocolate is completely melted, whisk in the cocoa, sugar, vanilla, apple puree and maple syrup.


Take the saucepan off the heat and pour the chocolate mixture into the bowl; stir it all together with a wooden spoon until well combined. Pour the slice mixture into the baking tray and spread it out as evenly as you can. Refrigerate the slice for at least a few hours before slicing and serving.
Posted by Cindy at 5:01 pm