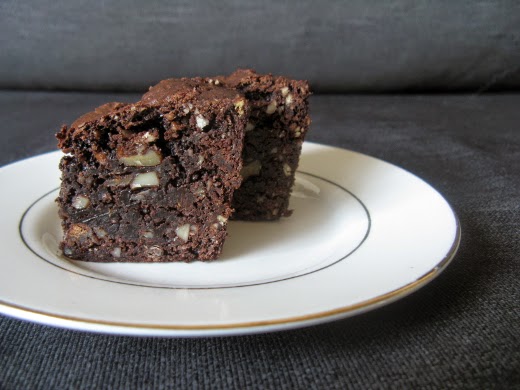 Well, of course I couldn't set off on a weekend away without taking something chocolatey. I went for another recent locally published recipe, this one for brownies on quinces and kale. I prepared it late in the evening, after the lentils had simmered and the biscuits were cooling on the bench. I ground up the flax seeds, perhaps not quite as finely as I should have, and set them to gooifying with some water. I piled up the almonds in the grinder but they weren't so keen to powderise. After a couple more attempts I powered down the grinder and discovered this.... 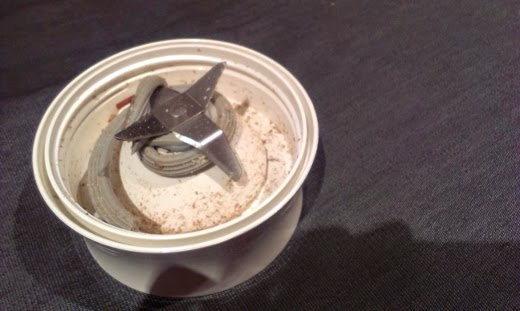 I'd snapped the seal, and it was performing some kind of python move on the blade. I sent Michael this frustrated photo, set the grinder aside and retrieved our hand blender. It struggled to smash the almonds, and they were pretty chunky.


I proceeded with the rest of the recipe, causing a little mess but no more mishaps. I wondered if my lax grinding might make for coarse, badly textured brownies. When their prescribed 35 minutes of baking had passed, they completely failed the skewer test and I baked them longer - I really needed something that I could slice cleanly and travel with. At the 50 minute mark I gave up, cooled 'em off, and popped the tray in the fridge for the night. Had I just wasted a lot of time and chocolate?


I had not. These brownies were definitely coarser and firmer than Rosalie's, but they were nobbly and chewy and very, very chocolatey. They travelled exceedingly well. When I want another batch at home this winter, I'll try dialling down the bake time to the original 35 minutes and get to know the gooier version.

But before that can happen, I need a new seal for my spice grinder...


Preheat an oven to 170°C. Line a 20cm square cake tin with baking paper and spray it with oil.


Grind the flax seeds to a powder in a spice grinder. Transfer them to a small bowl in stir in the water. Set the flax mixture aside.


Grind the almonds to a coarse powder in a food processor, then transfer them to a large bowl. Add the flour, cocoa, salt and bicarbonate of soda to the bowl and stir everything together. Set this bowl aside too.


Over medium heat, melt the margarine in a large saucepan. Add half of the chocolate, stirring it regularly to ensure that it doesn't burn as it melts. Take the chocolate off the heat when it is completely melted and thoroughly mixed. Whisk in the flax mixture, then the sugar and vanilla. Finally, stir in the soy milk until it's fully incorporated.


Pour the chocolate mixture into the bowl of dry ingredients, and stir them together until they're well incorporated. Fold in the walnuts, and then the remaining half of the chocolate pieces. Pour and spoon the brownie mixture into the cake tin, smooth over the top as best you can, and bake them for 35-45 minutes, until they have a firm crust. Don't worry if they don't pass the skewer test.


Allow the brownies to rest for an hour or two (you might even consider refrigerating them) before slicing and serving.
Posted by Cindy at 9:05 am