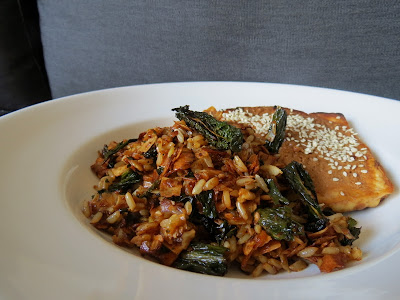 Our veggie box dictates a lot of our cooking these days, and with just half a bunch of kale to finish off before the new box arrived we went scouring our cookbooks for a solution. This salad from Heidi Swanson's book fit the bill nicely - it was easy enough for a work night dinner, didn't require any shopping and held out the promise of delicious toasted coconut.

I didn't do a great job on it - I'm still mastering our rice cooker, and the brown rice wound up being a bit undercooked, while my faffing about with it meant that the kale/coconut mix was slightly overcooked. It was a masterful display. Still, the recipe is pretty forgiving - the kale crisped up almost to kale chip texture, while the extra dressing helped to soften the rice out and the sweet, crispy coconut flakes made everything better. We served it up with maple-miso tofu (another recipe that I messed up but got away with anyway).

Cut the stems off the kale, remove the biggest stalky ribs and then roughly chop the leaves.

Combine the olive oil, soy sauce and sesame oil in a small jar and shake well to combine.

Combine the kale and the coconut flakes in a large bowl with 3/4 of the dressing and stir well to coat.

Spread the kale and coconut mix in a large baking tray (or two if you need 'em) and bake for about 15 minutes, until the coconut is golden brown - keep an eye on it every 5 minutes or so and stir things around a bit.

Put the kale and coconut mix, the rice and the last drizzle of the dressing into a bowl and toss well.

Serve as a side dish for four (we paired it with maple-miso tofu) or a main for two.
Posted by Michael at 11:03 pm