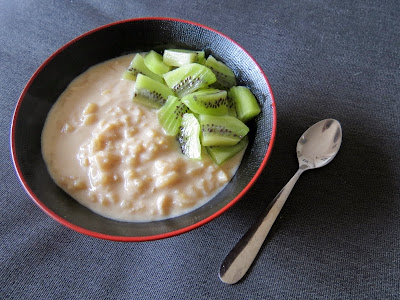 Thanks to houseguests and vege boxes, we've recently been inundated with kiwi fruits. I've never really developed a taste for their tartness, so I got to thinking about desserts I might be able to hide them in. Some went into an ugly yet edible vegan bastardisation of this financier recipe, but that only took down two. Cashew cream and frothy gelato came to mind, but I really wanted something warm and winter-friendly.


I hit on a winner with rice pudding. Its creamy warmth is perfectly in season, and softens out the kiwi fruits' acidity. I like these two much better as a team than I like either on their own, and I happily finished off the large pot of pudding and half a dozen kiwis.


This was also a chance to try mixing not-milks in place of dairy, a trick I noticed at a couple of New York's best vegan icecreameries. It definitely lent this pudding a silky richness that didn't taste overbearingly like any of the source ingredients.


Rice pudding
(adapted slightly from a recipe at taste)

Place the milk, vanilla, cinnamon, lemon rind and sugar in a large saucepan. Bring the mixture to the boil, stirring it regularly.


Pour in the rice and reduce the heat to low. Stir the mixture regularly, cooking it for 40-50 minutes, until the rice is completely cooked and the mixture is slightly thickened. Remove the pudding from the heat and allow it to rest for at least 10 minutes before serving with fruit.
Posted by Cindy at 1:29 pm