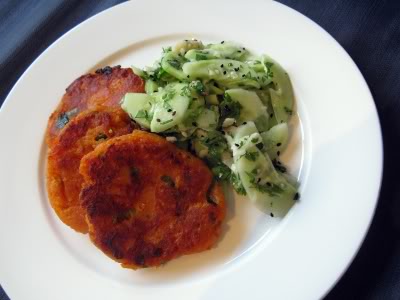 One of Cindy's workmates has been growing more cucumbers than she can eat, so we found ourselves with a couple sitting in the fridge that we had no real plans for. I'd been eyeing off Ottolenghi's cucumber salad, which he pitches as a dairy-free alternative to yoghurt or sour-cream based sauces. We followed the recommendations in the book and made sweet potato cakes to serve with the salad.

The cucumber salad is very, very flavoursome - raw ginger and garlic pack some pretty powerful punches (Cindy refuses to eat this at work for fear of overpowering her colleagues). It's also a cool and tasty treat, that really added to the fairly starchy sweet potato cakes. I'm not sure it's really a direct substitution for the lemon and yoghurt sauce originally intended to serve with the patties, but it definitely works with them, cutting through with pungent, cool deliciousness.

The sweet potato patties themselves were pretty simple and tasty enough, but they'd be a little doughy and bland without something like the cucumber to offset them - I'm not sure they'll end up in our regular burger rotation. Both recipes are pretty straightforward, although they do both include hour long rest periods (for drying the sweet potato and combining the cucumber dressing), which means you can't just throw them together at the last minute.

Cucumber salad with smashed garlic and ginger
(via Ottolenghi's Plenty)

Whisk together the vinegar, oils and the sugar in a mixing bowl. Add in the green onions and set aside to marinate.

Pound the ginger in a mortar with some salt. Add the garlic and keep pounding, until everything is broken up but not pureed. Scrape the smushed garlic and ginger into the dressing bowl and leave to sit for about an hour.

Cut the cucumbers into little angled half-moons about 1/2 cm thick. Combine the dressing and the cucumber in a bowl, add in the sesame seeds and corainder, stirring well to make sure everything is well combined. Leave to sit for 10 minutes or so for the flavours to really combine.

You can carefully tip some of the excess liquid away before serving, but we were happy just scooping out the solid bits and leaving a puddle of dressing in the bowl.

Steam the sweet potatoes until they're almost falling apart with softness and set aside in a colander to drain for an hour or so (this can correspond with the hour the cucumber dressing marinates for!)

Mash the sweet potatoes in a large mixing bowl and then add the rest of the ingredients.

Mix everything together until you've got a nice smooth dough (this is easiest with your hands). It should be a bit sticky and not at all runny - if it's liquidy (ours wasn't), add more flour until it's dough-like.

Heat the oil in a frying pan. Mush together little dough-cakes 5-10cm across and about 1cm thick and fry over medium heat, about five minutes on each side. Soak up any excess oil on some paper towels and then serve, with the cucumber salad beside (or on top!).
Posted by Michael at 12:40 pm