Our Monday pub-club continues to try to find new veg-friendly pubs to sample. This week it was The Napier in the back-streets of Fitzroy, most famous for its ridiculously artery-curdling meat attack, the bogan burger. Thankfully the menu is wide-ranging, providing many dishes with fewer than three types of meat.

The pub itself is something of a TARDIS, with 3 or 4 biggish rooms, a nice little courtyard and a handful of tables out on Napier St - we had to do periodic sweeps of the pub to make sure people knew where we were hiding. The menu provides plenty of veg options - a burger and two mains out of about ten meals in total.

Cindy and I both had our eyes on the vegie burger, a couscous and cannellini bean patty, with salad, eggplant relish, aoli, crinkle cut chips and coleslaw ($16). 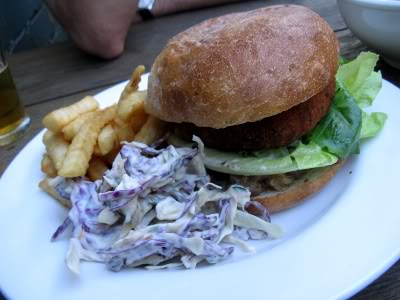 From where I was sitting (which was too far away to steal a bit), this looked great - chunky beans were visible throughout the patty, which had a nice crispy outer layer. Cindy concurred that the patty was one of the better vegie burger patties she's had, but with the big bun-roll and generous pile of chips, the whole thing was just too massive for her - I'm sure I could have given it a good home.

Instead, I worked my way through a whole red capsicum stuffed with couscous, mushrooms and haloumi, served with a warm salad of green bean and artichoke with shallot and sherry vinaigrette ($17). 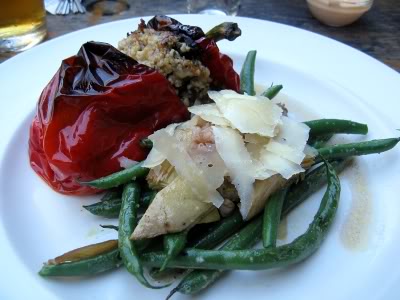 This seemed a meal much too classy for a pub offering up a bogan burger - the bean and artichoke salad was just the right mix of crunchy and tender, while the lightly roasted capsicum was stuffed full of glorious couscous-based tastiness. The only downside was the lack of substantial haloumi pieces in the filling - it seemed to have been melted through, a fact I only realised after spending half the meal digging around for a delicious cheesy chunk or two.

The Napier ended up providing an early pub-club highlight for 2011, with the rest of our gang very positive about their meatier choices. It's hard to imagine a better place to be on a sunny summer afternoon than a shady table in the beer garden at the Napier.

The Napier has been pretty well reviewed (largely thanks to its bogan burger notoriety). See: My Aching Head, G'day G'day, Strange and Cold, Mel: Hot or Not, Totally Addicted to Taste, Melbourne Gastronome, Eat and Be Merry, NavMan, Fitzroyalty and I Just Ate It.
The Napier Hotel
210 Napier St, Fitzroy
9419 4240
veg mains $16-$17
http://thenapierhotel.com

Accessibility: The Napier's rooms are crowded with furniture and people, and are often separated by steps.  Food and drink orders need to be placed at the bar.
Posted by Michael at 9:26 pm