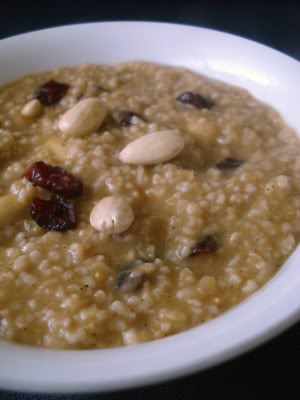 Last winter I tried my hand at porridge. This winter I've graduated to porridge using steel-cut oats. If you're not acquainted with steel-cut oats then read these posts by VeganYumYum and FatFree Vegan Kitchen - this is where I first discovered them. Then I discovered 'em in the flesh (or grain, rather) at Habib Wholefoods on Flinders St over summer.
Initially I thought that this breakfast would suck up as much time and money as it does water. Organic groceries are rarely cheap, especially on Flinders St, and these oats take longer to cook than their rolled rivals. But I've learned that I want only a 1/4 cup of oats each morning, making them much cheaper than the Kellogg's stuff I usually buy, and they cook in the time it takes me to shower. Best of all, they sustain me until lunch time like nothing else.
I guess what sets steel-cut oats apart from the regular kind is the texture. There's a real substance to them, something you can sink your teeth into, as well as that comforting sludginess. I've been cooking them up with orange juice, water and a few spices before stirring dried cranberries and blanched almonds through at the end. Except for this morning, when I used rice milk and the last of some apple-pear crumble: 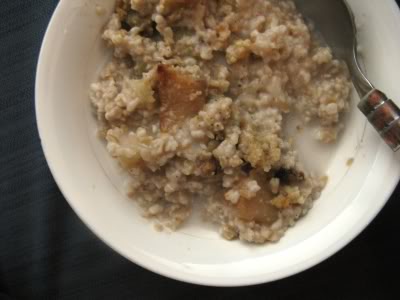 I've got my eye on the leftover dried figs and walnuts in the cupboard, too.

In a medium-sized saucepan, stir together the oats, water, juice, salt, cinnamon and Chinese five spice. Bring the mixture to the boil then reduce the heat to very low, cover the pot and cook until most of the liquid has been absorbed by the oats. SusanV estimates 30-45 minutes, but mine have taken as little as 20 minutes, so keep an eye on them.

Take the porridge off the heat, stir through the almonds and cranberries and serve the porridge in bowls.
Posted by Cindy at 6:07 pm