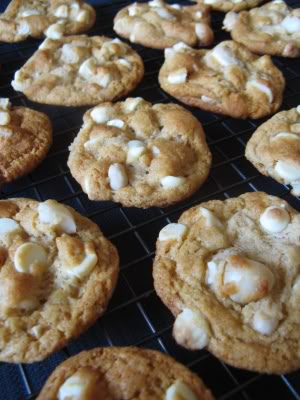 More biscuits to share round a seminar in the lab - these are eggless, butterless white chocolate macadamia cookies that Hungry Hamster posted quite some time ago. I suspect I initially bookmarked the recipe for its vegan potential but I ended up stirring dairy-riddled white chocolate chips into the dough.
Cookie doughs that use oil instead of butter have quite a distinctive greasy texture when raw - this one reminded me of the chocolate-raspberry and cryptic cookies I've previously baked. Unlike the butterscotch biscuits I baked a day earlier, this dough isn't particularly tasty before it's cooked - the baking powder and soda are rather strong. Unfortunately they're still a bit too prominent in the final product, though it's not all that difficult to concentrate on the sweetness of the white chocolate chips and reach for a second cookie.
There are two more quirks worth mentioning. First, Hungry Hamster's original quantity is relatively small, and thankfully I noticed this in time and doubled the recipe for the sizable group I was catering for. I didn't have enough macadamias, though, so I topped them up with raw cashews. The second quirk is that Hungry Hamster isn't clear whether she used canola or macadamia oil in the dough. Having macadamia oil on hand, I gave it a go but couldn't really detect it in the finished cookies.
All up, these were easy to make and enjoyed by many. But I probably won't use this dough recipe as a base for future vegan-friendly baking.

Preheat the oven to 170°C and line a baking tray with paper.
In a large bowl, stir the flour, baking powder, carb soda, salt and sugar together.
In a smaller bowl, whisk together the macadamia oil, maple syrup and vanilla. Pour it into the flour mixture and stir everything together until just combined. Fold in the nuts and chocolate chips.

Scoop spoonfuls of the dough and place them on the baking tray, allowing plenty of room for the cookies to spread. Bake them for 10-14 minutes, until lightly brown and just developing a crust.
Posted by Cindy at 7:54 pm