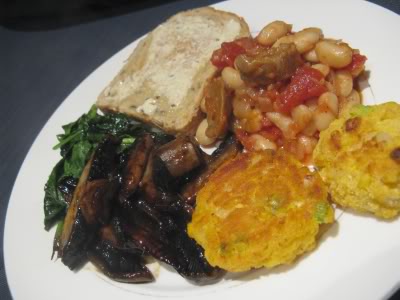 This Sunday night dinner looks more like a big vegan breakfast! Here's what we ate...
Baked beans with 'sausages'. I tried Veganomicon's recipe for Cheater Baked Beans and liked them a lot. If you have a cooking pot that can be used both on the stove-top and in the oven, then this is a one pot wonder. We don't, so unfortunately it dirtied a few more dishes along the way. The sauce is very sweet, owing to a heapin' half-cup of molasses/golden syrup, and I'll try reducing that next time. My special addition to the mix was a couple of home-made vegan sausages, retrieved from the freezer, cooked in amongst the beans towards the end of the oven time, then sliced into small chunks once tender. Highly recommended.
Hushpuppies. I'd never heard of hushpuppies before, but I got caught up in Lindyloo's nostalgia and enthusiasm and gave them a go. By contrast, Michael was distraught at having to eat anything with 'puppies' in the name. These little balls of crunchy corn eventually won his reluctant approval, being perfect for dipping into those saucy baked beans. Though they went down a treat, I'll probably revert to my usual cornbread recipe next time I'm in the mood for such a thing.
Sauteed mushrooms. I just finished these fungi off with a couple of teaspoons of vegetarian oyster sauce and loved the salty-sweet effect.
Sauteed spinach. Much-needed greens.

Multi-grain toast spread with Nuttelex. A cook-up staple, brilliant with the mushrooms.


It's rare that I prepare a meal with so many separate components, but they were all well appreciated. The quantity of beans and hushpuppies made for a couple of envy-inducing workday lunches too.


Baked beans
(based on the Cheater Baked Beans in Veganomicon, by Isa Moskowitz & Terry Romero)

Heat the oil in a medium saucepan - use an oven-proof pan if you have one. Cook the onions in the oil for about 10 minutes, until they're soft and starting to brown. Add the garlic and cook for a further minute. Stir through the crushed tomatoes, golden syrup, mustard powder, salt, allspice and bay leaf; cook the sauce for about 5 minutes.

Preheat the oven to 200°C. Line a baking tray with paper and lightly spray it with oil.

In a large bowl, whisk the powdered egg replacer into the rice milk. Stir in the polenta, flour, baking powder, sugar and pepper. Next stir in the corn kernels, green onion and jalapenos.
With clean wet hands, form the mixture into balls and place them on the baking tray. Spray them with more oil. Bake the hushpuppies for 10 minutes, turn them over and bake for a further 5-10 minutes, until they're crispy on the outside and lightly browning.
Posted by Cindy at 11:59 am