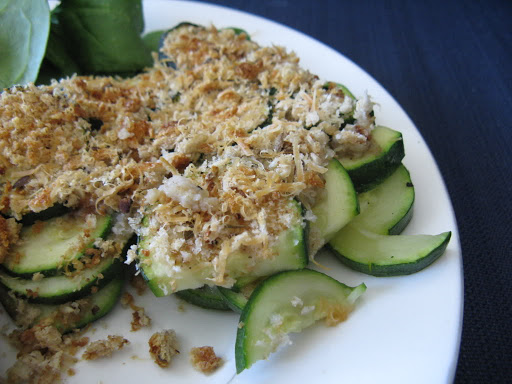 Vegan sausage rolls weren't the only triumph of Sunday night's dinner. We typically augment pastry meals with steamed or sauteed green vegetables but on this occasion I branched out, taking my cue from an almost year-old comment from Kathryn of Limes & Lycopene about zucchini crumble.
I embellished a bit on her description, sneaking sprinklings of pepper and chicken-style stock cubes between the layers of zucchini rounds, and substituting a dried herb mix for the fresh ones she mentioned. The parmesan I grated lightly over the top was the saddest, driest looking scrap of cheese that you've ever seen but it did a fine job in the end product - the aim was to add a subtle savoury kick to the breadcrumbs, not to glue them together with melting goo. For a vegan version I can imagine nutritional yeast flakes standing in well, but really I'm itching to try Bella's recipe for vegan parmesan. Riffing on her approach, I bet that a few ground nuts (cashews, almonds, pine nuts!) would make a swell topping too.

Estimate the quantities yourself, depending on how many people you wish to feed.
Start by preheating the oven to 180-200 degrees C (I went for 200 since I was simultaneously baking the sausage rolls). Lightly grease a baking dish (I used a small, square cake tin).
Slice several zucchinis into rounds. Layer them in the baking dish; it doesn't matter if there are gaps or overlaps. Sprinkle each layer alternately with ground black pepper or chicken-style powdered stock as you go - don't overdo it, you just want a little seasoning to bring out the zucchini's flavour.
Time to crumble! Sprinkle over breadcrumbs, chopped fresh or dried herbs, a light layer of grated parmesan, nooch, vegan parmesan and/or ground nuts.

Bake the crumble until the zucchini is tender and the topping is golden brown, about 15-20 minutes. You can cook it further than the colouring you seen in the photograph above - our reheated leftovers had a deeper colour and flavour.
Posted by Cindy at 7:14 pm