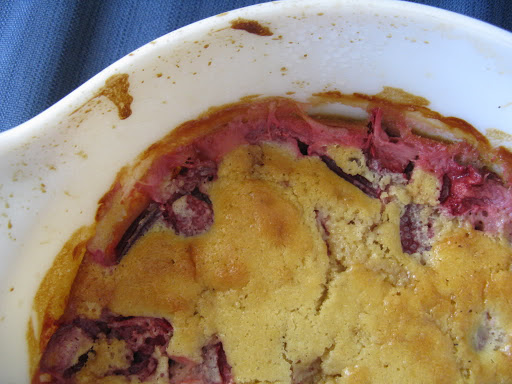 I've no idea why I thought of this 18-month-old pudding recipe from Food Blogga on the weekend, much less why I baked it. But I did, and it was a fine thing. Perhaps it could have done with some vanilla essence, or a teaspoon of ground ginger, but it seems petty to disparage the pink, fruity pleasure it already is. It's more fruit than pudding and more pudding than my favourite pudding dish can handle. So I poured half of it into my second-favourite pudding dish and saved it for later. Not much later, mind - Michael's already eaten half of it! You'll have no problem doing the same if you're partial to rhubarb.


Strawberry and rhubarb pudding
(taken from Food Blogga, who was inspired by a recipe by Jill Dupleix)

Preheat the oven to 180 degrees C. Grease a large baking dish, and drop the rhubarb and strawberries into the bottom of it. Sprinkle them with the brown sugar, then with a couple tablespoons of water.

In a small mixing bowl, sift together the flour and baking powder.

In a larger bowl, beat together the butter and sugar, adding the eggs one at a time and continuing to beat until it's all well combined. Continue to beat the mixture slowly, adding a third of the flour mixture, then half the milk, alternating again until they're all incorporated.

Spoon the batter over the fruit and smooth over the top a little. Bake the pudding for about 40 minutes, until it's golden brown on top and a skewer comes out clean.
Posted by Cindy at 7:04 pm