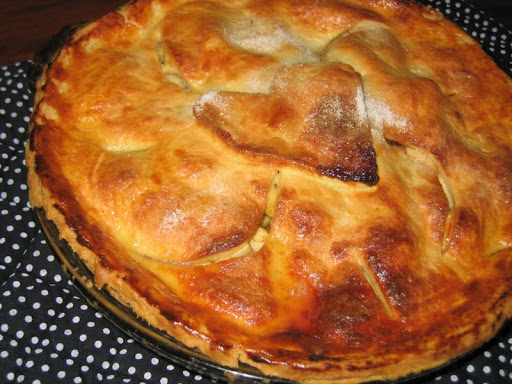 Michael and I don't usually go in for Valentine's Day. Teddy bears with "I Wuv You!" slogans are really not my thing and I prefer to see flowers in their natural habitat rather than decapitated in a vase. But this year I decided to make a gesture of my appreciation for Michael by preparing his favourite dessert. Although he's never actually pronounced apple pie to be his favourite dessert, six and a bit years of observation have indicated that, when it's an option, Michael's preference is for the fruit/pastry combo: danishes of all fruity pursuasions, apple turnovers, apple slices, strudels and pies. Last month I was browsing The Amateur Gourmet's archives: Adam made a Martha Stewart apple pie, wrote a funny post about it, and impressed (among others) his boyfriend Craig, an alleged pie connoisseur. The heavens opened up, God's light shone down and I saw myself in Adam's exulted position, winning over my man with my home cooking and the blog-reading public with my wit. Or I just book-marked the link for later, whatever. Either way an entire pie's not really something I can justify making for just the two of us and I decided to invite Valentine's Day along.

I won't bother paraphrasing the recipe for you, 'cause it's written by Martha Stewart and we all know she's The Man. (You heard me.) But here are a couple of notes about the process:

1. I'm the complete antithesis of the Domestic Goddess that Nigella Lawson promises we will transform into when we bake for our loved ones. When pastry, pre-heated ovens and the like are involved I'm inclined to get hot, flustered and grumpy. Thus, I made the pastry the night before. Twenty hours of refrigeration meant that the butter in the pastry set hard and I had to leave it on the bench for 5-10 minutes before I could roll it. Don't let it get too warm though! There's only a small window of relatively cool, flexible pastry before it melts to goo. If there's enough room in your fridge, I'd recommend rolling out the pastry and putting the flat pieces in the fridge on day one.

2. I can't be trusted to read a recipe properly. I forgot to add the flour and the butter to the filling. My apples were still darn tasty, but they were surrounded by a lot of liquid. The flour should set that right up. 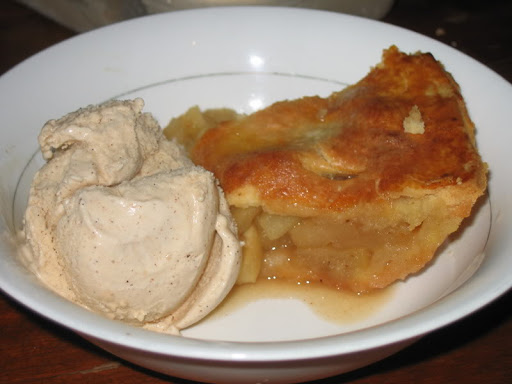 In spite of my minor issues the pie was a great success. I was a little surprised that the pastry dough didn't contain sugar, but it really doesn't matter. It is as buttery and flaky as I've ever succeeded in making from scratch. I probably added a bit more lemon juice than necessary, but I appreciated the tang that added to the filling. The filling, however, wasn't overly spicy. That was fine, because a few days earlier I churned up some cinnamon vanilla ice-cream! (The recipe's here.) These pie and ice-cream recipes are perfect partners, and it was very cute to see them sitting together so happily on this day for coupling.

Because I made the ice-cream a few days ahead, I failed to keep this gift a surprise. Michael knows what the ice-cream maker looks and sounds like, and it was difficult to come up with reason why he couldn't eat the ice-cream NOW. In his forewarned state, Michael reciprocated by bringing home something for me - a decorative hen, made of 100% recycled materials. Not quite as random as it sounds, since I admired her in a shop several months ago. 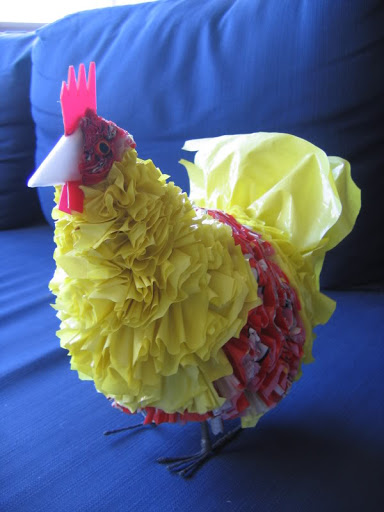 "I gave my love a chicken, it had no bones."

This post has been entered into the blog event Waiter, there's something in my... pie!
Posted by Cindy at 2:05 pm