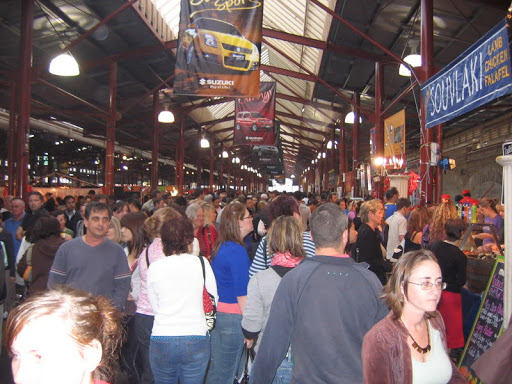 Melbourne's summer has a lot of joys: sun until 9 at night, music festivals, outdoor cinemas and the occasional insane 42 degree day. To top things off, there's the Queen Victoria Night Market - from December to February Wednesday nights are market nights at QVM. Live music, hawker-style food, trendy trinkets and cheap, touristy crap take over a big chunk of the Queen Vic site and throngs of people flock to shop, eat, drink and dance awkwardly to a covers band consisting entirely of police (I really wish we'd taken a photo of this, but alas).

Cindy at I met up at about 6:30 and wandered down to find ourselves some dinner. Unfortunately, so did everyone else in Melbourne, so things were pretty crowded. When you add in Cindy's aversion to eating and walking (apparently she can't concentrate on tasting things and moving her legs), it made for some tricky dining. Luckily, there were some gaps in the crowd once you moved into middle section, allowing us to eat at a standstill and take a few passable photos. 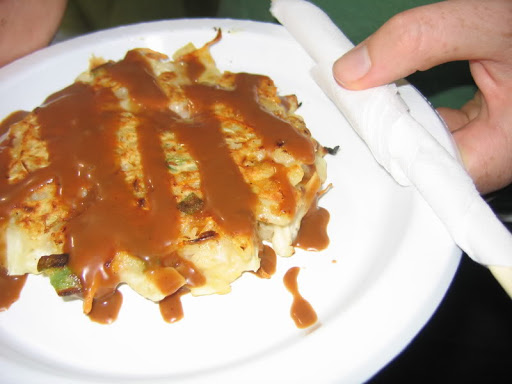 We started out with okonomiyaki ($4) at one of the Japanese places - a vegetarian pancake, fried while you wait and covered with some sort of vego sauce. Cindy scarfed down most of it, while I wandered about trying to find my own food (full disclosure: I visited the markets previously, without a camera and enjoyed my own fresh Japanese pancakes). I opted for something from Panzarotti, an Italian place. They had a few vegetarian options: a mushroom pasta, at least one panzarotti and my choice, pea, mint and ricotta risottinis (3 for $5). Risottinis turn out to be risotto, fried into delicious little logs. The mint was tasty, but the cheesiness got too much for me after the first two. Luckily, Cindy had polished off her pancake and was happy to pitch in and finish off the third.

Of course, that meant that Cindy was done with the savouries and wanted to move on to dessert. 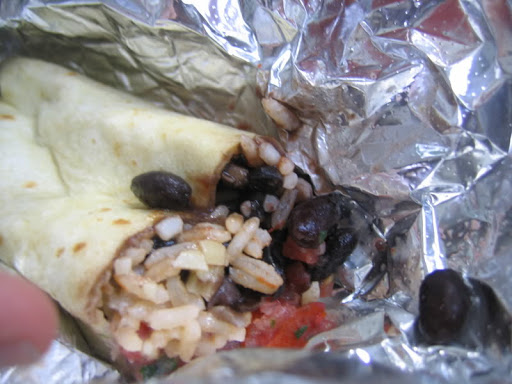 I needed a little more food, and moved on to Gringo's Mexican stall (previously seen at the Johnston Street Hispanic Festival) for a soft taco with beans, salad, guacamole and hot sauce ($4). It was fresh and tasty, but a little lacking on the hot-sauce front. They'll want to lift their game for the Hot Sauce and Fiery Foods Festival.

Cindy and I did a loop of the stalls, checking out the chocolaterias and fudge stalls to find her a tasty dessert. She settled on a chocolate mousse from ChocolateLovers, made from 60% cocoa Lindt chocolate. I managed to sneak a few spoonfuls while Cindy was trying on some fishermen's pants, and can report that it was smooth, rich and chock full of chocolate. 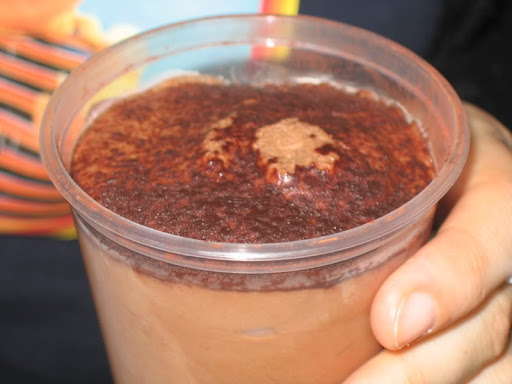 The summer night markets are fun: bustling, full of food options (there must have been at least ten stalls that sold vegetarian food, including Indian, Thai, Spanish, Mexican, Japanese, Italian and chips. That's right, chips are a food category unto themselves) and with a fair number of interesting crafty stalls amongst the t-shirts and other tacky items. There are worse ways to spend an evening than grabbing a beer, a few tastes of cheap(ish) food and having a wander past the cop-rockers.