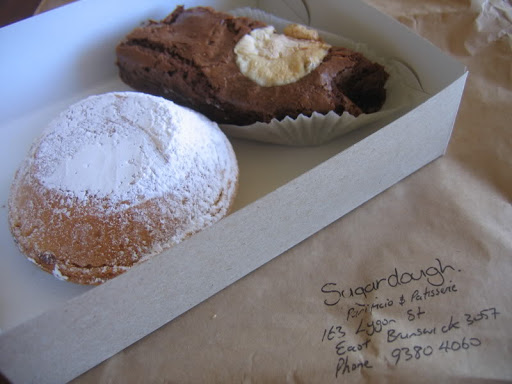 Michael and I spent a few hours of Saturday morning Christmas shopping in Brunswick, and hit Lygon St for lunch at about 1:30pm. We had I Carusi in mind, but suspected it would be shut and didn't know the way to Holmes St anyway. When we instead encountered the much-blogged-about Sugardough (here, here and here) we knew we had to try it out. The small interior was crowded with people lining up for their share of the baked treats, but we had no problem finding a little table off to the side. From this vantage point we ducked and weaved our heads around those standing for their takeaway orders, checking out the breakfast menu behind us, the display case of paninis and quiches, the oven of pies and pasties, and the blackboard of specials. We were spoiled for choice, with many meat-free options, and I tried not to look too carefully at the assorted biscuits, cakes and sweet pastries. (Don't fret: you've seen the first photo and you must know this'll end well.) 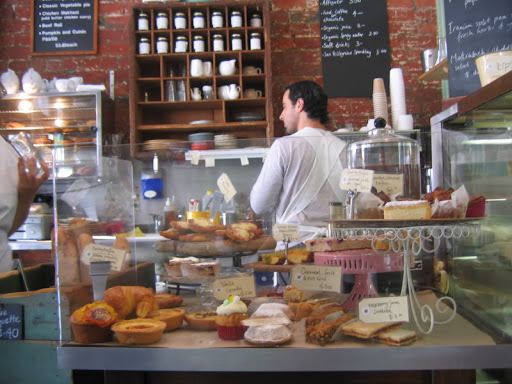 The atmosphere of Sugardough is trendy yet comfortable, very shabby chic, though the Supertramp soundtrack was rather incongruous. It really is impossible not to be transfixed by the display of sweets at the counter (go on, click on the picture above and take a closer look). 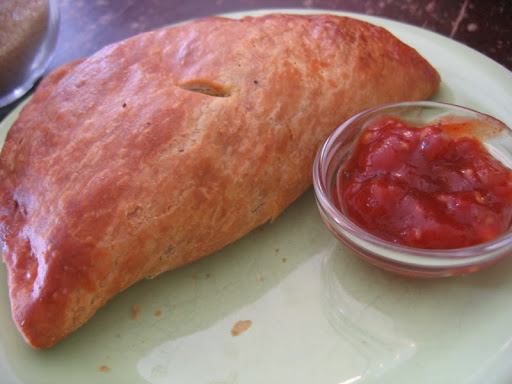 Even so, I ordered a pumpkin and cumin pastie, which arrived with a small tub of home-made-looking tomato relish ($3.40). There was a high pastry-to-filling ratio, with an outer that was only slightly flaky. The filling had a uniform but not completely smooth texture, which wasn't too sweet, and had just the right cumin edge to remind me of an Indian curry. Michael's pick from the board of specials, Iranian split pea soup with fresh herbs and yoghurt ($7), took a little longer to arrive but was definitely worth the wait, as far as he was concerned. 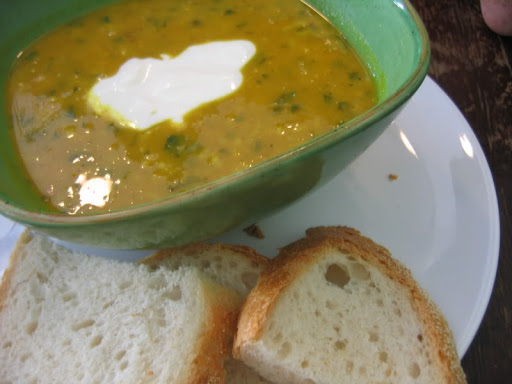 It was complex in flavour and texture, with a surprising but welcome taste of mint. In spite of the delay, Michael's plate was empty before mine!


Without any prompting from me (I don't think I was making wistful looks), Michael suggested we take home a little sweet each for afternoon tea. Cheap Eats 2006 recommends the brownies as one of the top three in Melbourne, so my decision was made. Michael didn't take much time in choosing a blueberry and ricotta pastry for himself. I carefully carried them home on the tram, nestled on a tray in a paper bag, and it was several hours before we even considered eating them.

Michael's morsel had a lot of buttery shortcrust pastry going on, but only a few blueberries. The soft, cloud-like ricotta had a nice tart edge created by a smidgin of lemon rind, I suspect. My brownie had just the texture I love: moist and fudgey inside, with an outer that starts crisp then gives way to chewy. The taste was super-sweet and short on cocoa, in my opinion, and yes, that is a marshmallow melted on top! The last quarter was almost an effort to eat, so rare for me and desserts.

Sugardough is an absolute winner on variety and value, and our mixed success with the sweets won't diminish my enthusiasm to try more.

Categories
Posted by Cindy at 7:07 pm