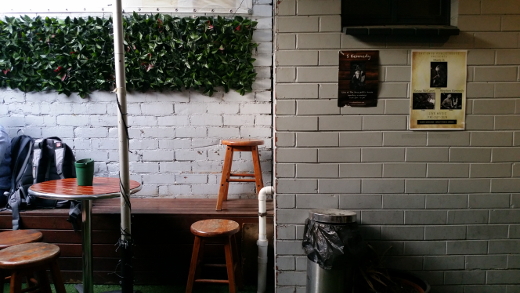 When we're feeling lazy on a Friday evening, we're lucky to have the Snug close by. (South-siders can no longer say the same, with their St Kilda sister closing this month.) We've been pleasantly surprised to find that even as folks clock off for the week, the back garden is not necessarily packed with drinkers and smokers. 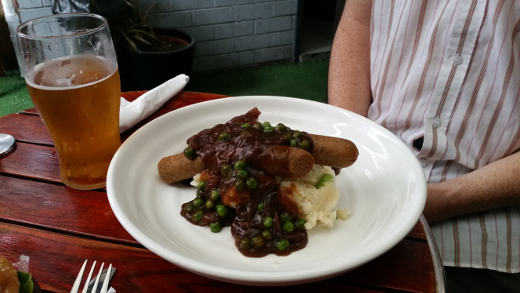 Their vegan menu has stabilised somewhat since our first visit. Michael went back to the bangers'n'mash (now $26) - it's a filling but not over-the-top serve with a lovely red onion gravy. Little else on the menu looks familiar but plenty looks appetising, from cauliflower poppers to shepherd's pie, spaghetti alfredo and three mock burgers. 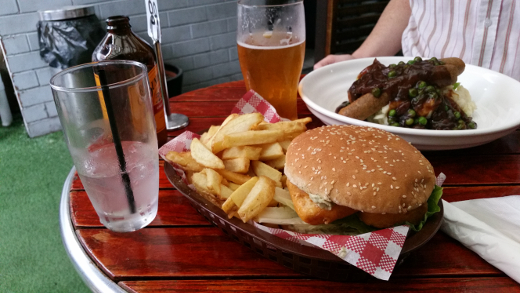 I took on the fillet-no-fish burger ($20) - it's a really nice rendition based around the excellent Gardein fillets, with a soft-but-not-too-sweet bun, tartare sauce and salad. Chips were abundant, cut thick with the skin left on. (I should've hunted down some sauce for them.)


Super Salad aside, this vegan pub menu is very heavy on the mock meat and won't suit all tastes. But for those of us already enamoured with the Cornish Arms down the street, the Snug is a neat and perhaps cosier alternative.

You can read about our first visit to the Snug here. Since then Veganopoulous has posted a thorough review of their vegan menu.


Accessibility: The interior is crowded, with a mix of tables and high seats at the bar. The courtyard has bench seats and stools. We ordered and paid at the high bar.
Posted by Cindy at 7:10 am