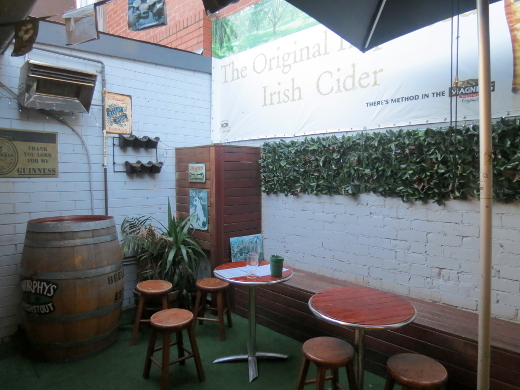 I was pretty shocked when I read Faye's post about the vegan options at St Kilda's version of The Snug Public House - the Brunswick branch has always seemed quietly charming but very, very meaty. Luckily for us though, the St Kilda vegan menu seems to have gone well, prompting the owners to start rolling out vegan options out near us. We dropped by with a couple of friends on one of their first vegan-friendly nights to check things out. It's a small pub, with just a handful of tables inside and a few more in their cute little courtyard. 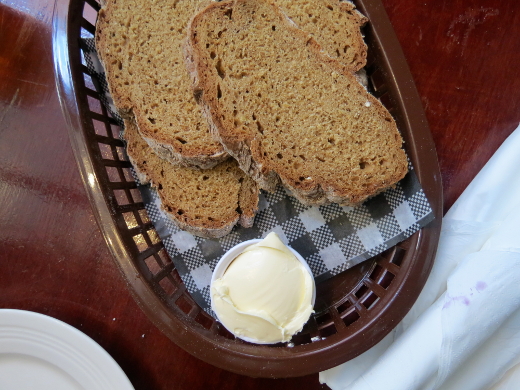 They were still sorting out the menu when we visited - there were just four dishes on offer and things were still changing from night to night. They're promising that a bigger menu is on its way, including vegan options for weekend brunch. Exciting times! The kitchen got us started with Guinness bread and Nuttelex while we workshopped our options. In the end, with four dishes to choose from and four people eating, it was clear what we had to do: one of each to share. 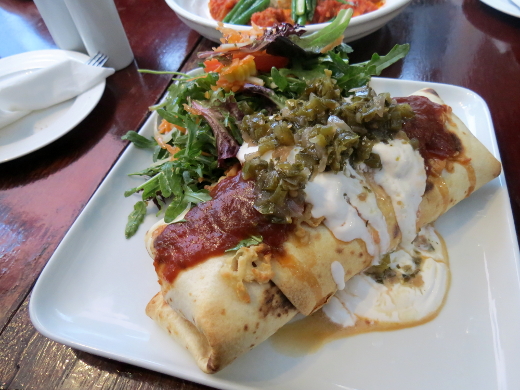 First up was the burrito - a massive tortilla stuffed with rice, jackfruit pulled 'pork' and coriander, topped with vegan sour cream, salsa and minced jalapeno ($23). This was ludicrously big, and anyone ordering it on their own would surely struggle. Between four it worked okay, although the burrito filling was very heavy on the rice and a bit light on the jackfruit. 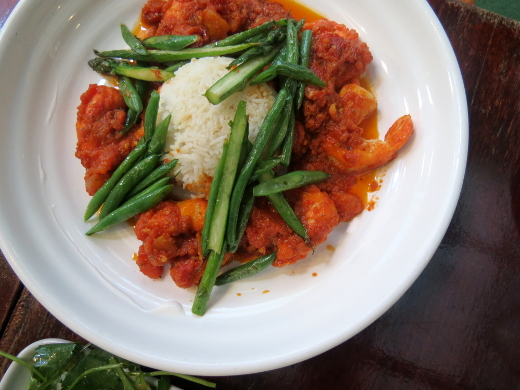 Next up were the chilli garlic prawns, with grilled asparagus and steamed rice ($23). I'm usually pretty skeptical of mock prawns, but this dish just about converted me. The chilli sauce was the highlight - spicy, garlicky and just about the best way to make the slightly rubbery mock prawns work. This was among the most popular dishes for the table. 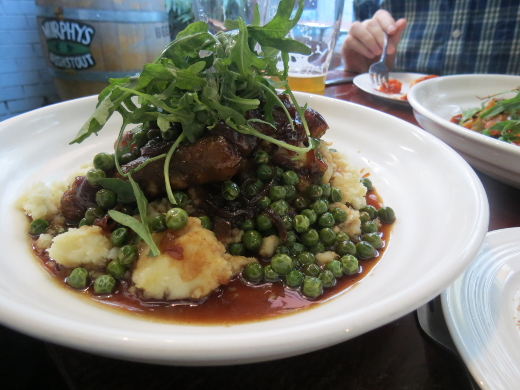 The remaining dishes were more classic Irish fare, starting with bangers and mash with peas, caramelised onion and gravy ($23). I loved getting a vegan version of this kind of classic pub food, and so much about it was perfect - wonderful gravy, creamy mash and beautifully cooked onions. The bangers let things down a teeny bit - I'm not sure what brand they're using (or if they're making their own), but they were a bit on the dense side. Still a pretty excellent meal and one that would be perfect with just a few tweaks. 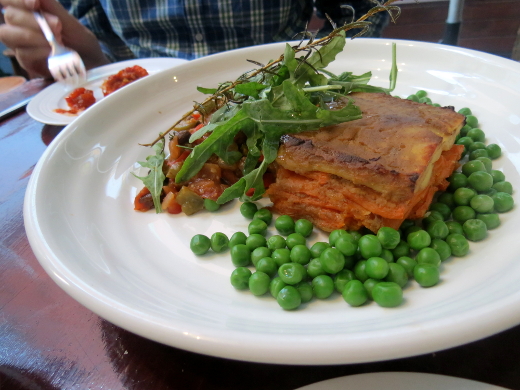 The final dish of the night was a potato gratin, served with steamed peas and a chorizo ragu. This was the another favourite - the gratin was wonderful and combined nicely with the surprisingly good ragu.

The Snug's vegan turn is really exciting - it's probably the closest pub to our house and is perfectly placed to scoop up any vegan pub-food spillover from the always-busy Cornish Arms up the road. The food was excellent, the staff  enthusiastic and friendly, and the atmosphere charmingly relaxed. We'll be keeping a close eye on things here - other vegans and vegetarians should get along and make sure the vegan menu is worth the pub's while!


Veganopolous brought The Snug to our attention with her review of the vegan options at the St Kilda venue. Positive Brunswick reviews from What Em Did, Parma Daze and Gourmet Chick are of the meaty menu.
____________


Accessibility: The interior is crowded, with a mix of tables and high seats at the bar. The courtyard has bench seats and stools. You order at the table and pay at the bar.
Posted by Michael at 7:20 am