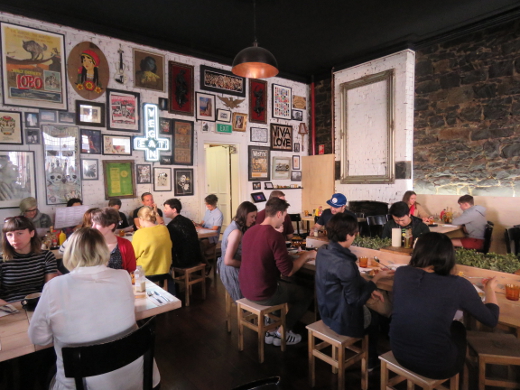 We're regular Smith & Daughters visitors and, as you can see up top, this is our seventh blog post about the restaurant. Yet our last post is from more than a year ago! Here's a run-down of the current, very-limited-time-only 2nd birthday menu. 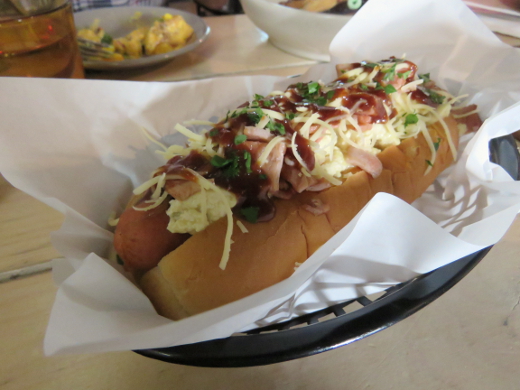 The weekend brunch menu takes its inspiration from American diner food, and with the help of Nat & Ben we were well across it. Michael was drawn in by the Brekkie Hot Dog ($15), piled up with tofu scramble, cheese, onion, bacon and BBQ sauce. It's an excellent vegan hot dog, to be sure, but one that taught me I'm not up to weiners and BBQ sauce this early in the day. 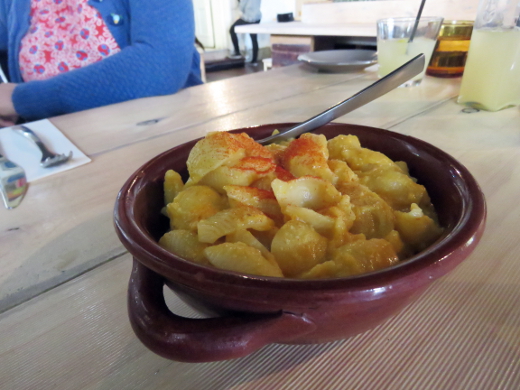 Nat was most enamoured with the mac n cheese ($14), carby and creamy and garnished with just a sprinkle of paprika. 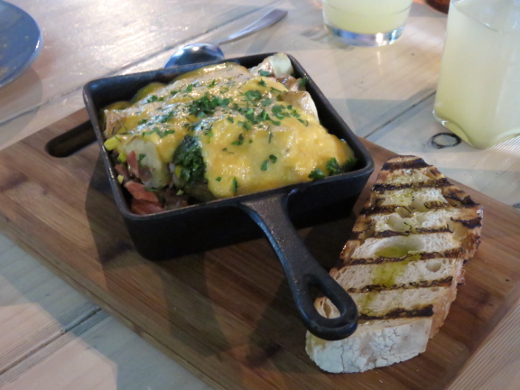 My surprise highlight was the hash ($16). The jalapenos and avocado of their long-standing Mexican hash are replaced here with bacon, onion and kale; the same corn, cheese sauce and starchy foundation of fried potatoes stuck around. 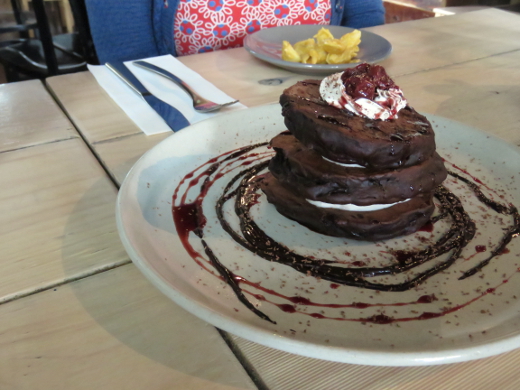 How did that hash outperform the sweet stuff? There were two very, very promising contenders there. The first was this Black Forest Pancake Stack ($17). The pancakes had a lovely fluffy texture but weren't as chocolatey as they looked, although the garnishing ring of sauce fixed that right up. The Fruit LoopWaffles ($17) were multi-coloured mayhem, crispy and spread with jammy blueberries, sandwiched with vegan cream and mousse, then scattered with the eponymous Froot Loops. It was fun to take on, but a reminder to us adults that the six-coloured cereal barely generates one-and-a-half dimensions of flavour. (The first dimension is, of course, sugar.)
__________ 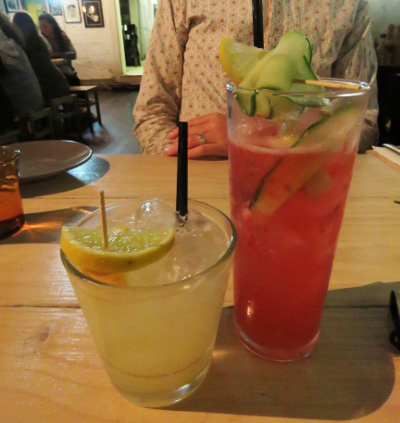 Two short days later we headed back in with Steph & Hayley for dinner. This menu is a greatest hits tour through Shannon Martinez's years cheffing around Melbourne at the East Brunswick Club, Gasometer Hotel, South & Sweetwater Inn (uh, yeah, we're fans). We kicked off with cocktails - a gin-spiked raspberry lemonade/peach sweet iced tea Arnold Palmer ($17) for Michael, and a potently citrussy Sour Puss ($17) for me. 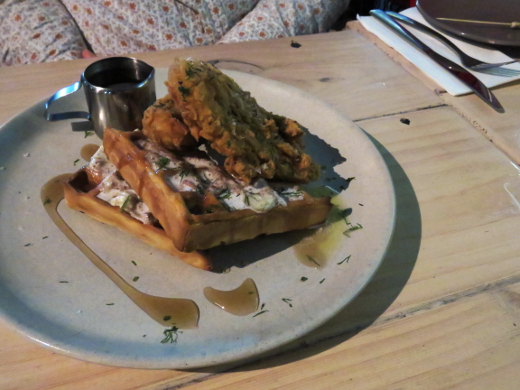 Our nostalgia was drawn in too many directions and it was tough to choose just two stomachs worth of food. Michael and I started by halving the Gasometer-era Southern Fried Chicken & Waffles ($19). They were mercifully smaller but even tastier than I remembered, with the waffles slathered in caramelised maple bacon butter and a deceptively light spiced batter on the mock chicken. 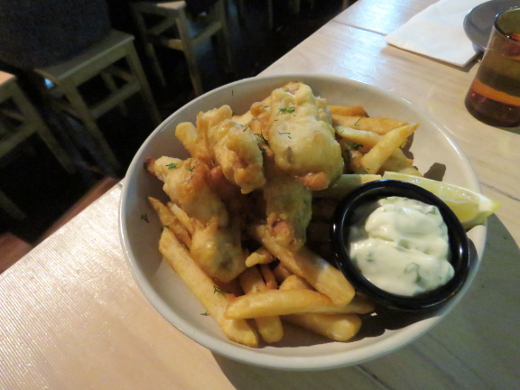 The Sweetwater Inn-style Fish & Chips ($16) was, by comparison, enormous. The mock fish, too, might've been flakier and more delicately beer-battered than in their first incarnation; the chips were very good, but not quite Gasometer-good. 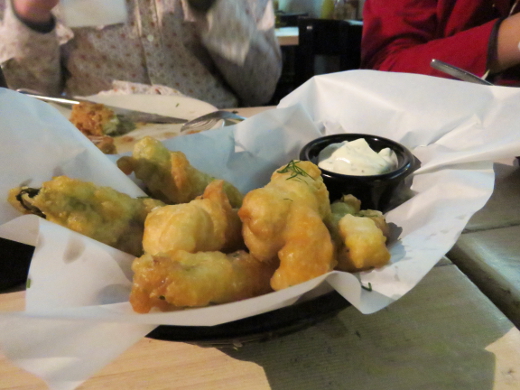 By this time I was ill-equipped to take on the Gasometer-throwback Crispy Fried Pickles ($10) that Michael insisted on. They would've been at their best with that Sour Puss cocktail and without the two major meals in between, interfering. 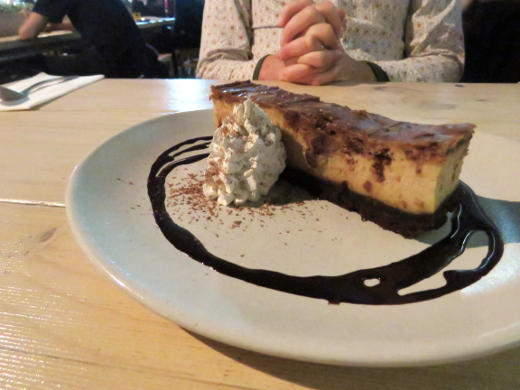 Though we were really very full, I convinced my co-diners that one dessert between the four of us wasn't really a big commitment at all. We revisited the East Brunswick Club's Choc Peanut Butter Cheesecake ($15). In 2009 I described it as 'a super-rich slab of salty-sweet heaven, best shared with a fellow connoisseur'. It still is. 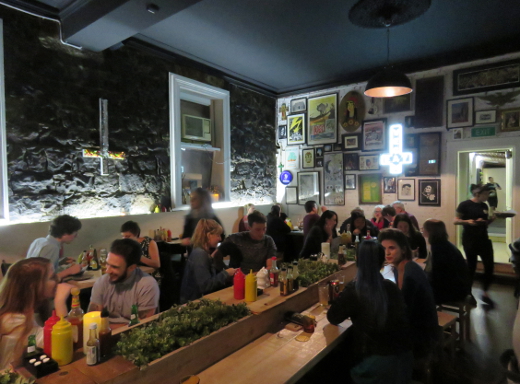 Smith & Daughters' 2nd birthday menu is an over-the-top celebration of a very special vegan restaurant, and the chef behind it. They've just announced an upcoming cookbook, and we can't wait to see what they dream up next.


You also can read about one, two, three, four, five, six of our previous visits to Smith & Daughters. The flash-back faves menu has also appeared on A Melbourne Vegan Eats.

Since our last blog post, Smith & Daughters has received positive coverage on veg blogs Vegetarian Life Australia, Veganeers, Veganopoulous and Vegan Miam. It's also won fans on omni blogs Filled with Food, The Melbourne Fussy Eater, The Melbourne Glutton, DAMMIT JANET I LOVE FOOD, Sweet and Sour Fork, Cup of Three and Food Fable. Only Zinc Moon has had a tough time, seemingly due to a food allergy.

Accessibility: The entry is flat and narrow and the tables are pretty crowded. The interior is dimly lit and loud at night. Toilets were located up several steps, were gendered and of standard dimension. We ordered at the table and paid at a high counter.
Posted by Cindy at 10:03 am