Last weekend we headed up to Florence St for a late breakfast before running some errands around Brunswick. We've had half an eye on The Commons for a couple of years - it's a unit block by the railway tracks that has sold itself on its sustainability measures. On an Upfield walk last year we noticed that the ground floor cafe, Steam Junkies, has a few veg options and they've been given a thumbs-up on Green Gourmet Giraffe.
The odds for vegetarians are good, with thirteen of the twenty-two regular menu dishes boasting a V (and almost half the menu including a gluten-free friendly *). Looking beyond the plain toast, though, there's not a lot designed for vegans. Poached eggs and cheeses abound, and there's also a curious preponderance of quinoa. 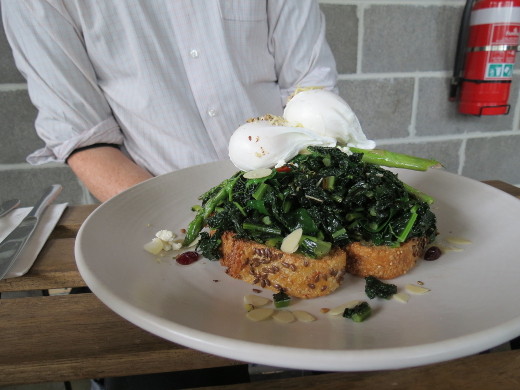 Michael's plate captured their poached eggs-on-superfoods style, starting with quinoa toast and a mound of garlic sauteed kale and spinach, dotted with dried cranberries, almond flakes and goats curd with a couple of asparagus spears too ($16). His coffee and eggs met with the high standards expected of inner-north cafes, and he liked the way the cranberries broke up the green theme. 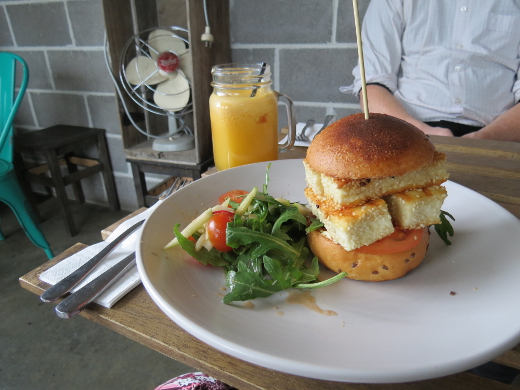 Budgeting on a two-meal day, I made my first one a haloumi burger ($13.50). The cheese was rolled in sesame seeds and one of the lightest I've encountered, with barely a squeak to be had, not to mention voluminous! Really, look at it. There was double the cheese this burger needed. But instead of playing haloumi Jenga, I elected to eat this a half at a time, first with the relish-smeared brioche top and second with the tomato, mayo and rocket. The tangy dressings and side salad of rocket, cherry tomatoes, apple and radish were my ideal complements to the cheese, and I capped it all off with a frothy freshly squeezed orange juice ($6). 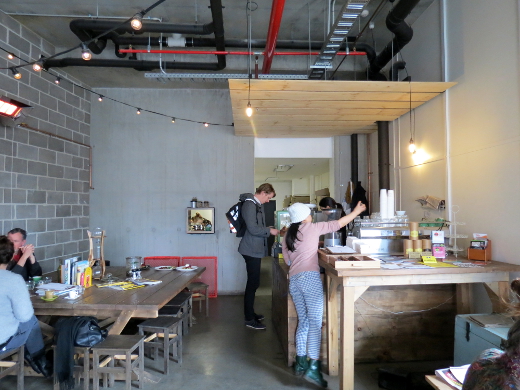 With its communal table, bike racks and polished concrete floor, Steam Junkies does everything you'd expect of a Brunswick cafe. Their egg-and-quinoa menu is a mite less predictable, and the haloumi burger is unforgettable - they could well have their niche.
____________
Bloggers have been unanimously positive about Steam Junkies - see fellow vegetarian Green Gourmet Giraffe and omnivorous bloggers A Place A Day, makelovetotheworld and CHOMP AND SLURP.
____________
Steam Junkies
1/7-9 Florence St, Brunswick
9973 4309
regular menu, specials
facebook page


Accessibility: The entry is flat and wide with a sliding door. Tables are generously spaced, with a mixture of low backless stools, benches and slightly rickety chairs (a couple of infants' high chairs are also available). We didn't visit the toilets, but observed another customer borrowing a key from staff to access them outside the cafe. We ordered at the table and paid at a low-ish counter.
Posted by Cindy at 9:34 pm